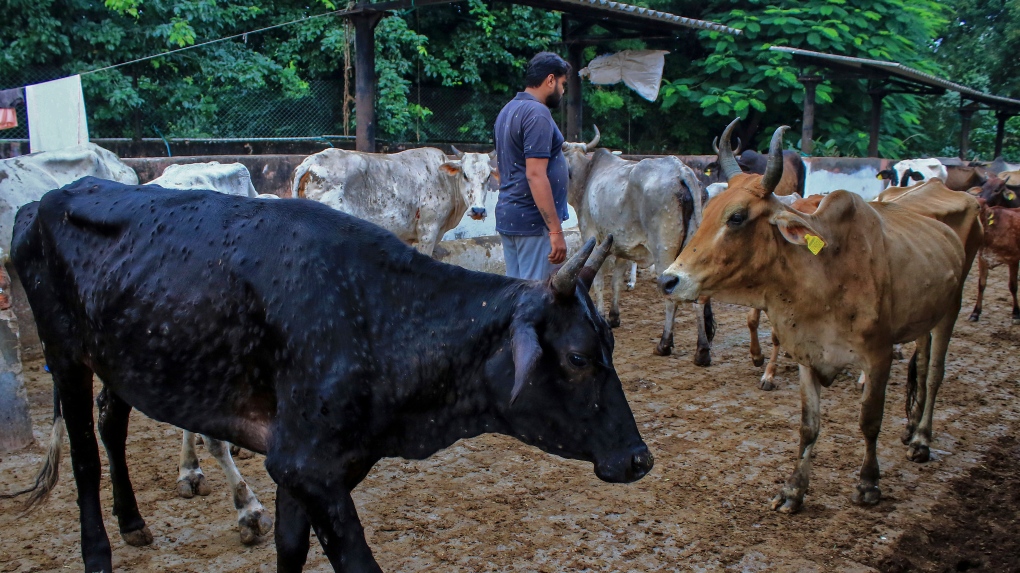 A man stands amid cows infected with lumpy skin disease at a cow shelter in Jaipur, Rajasthan state, India, Sept. 21, 2022. Infected cows and buffaloes get fever and have lumps on their skin. The viral disease that is spread by insects like mosquitoes and ticks has killed at least 100,000 cows and buffaloes in India and sickened more than 2 million. (AP Photo/ Vishal Bhatnagar)
NEW DELHI -

A viral disease has killed nearly 100,000 cows and buffaloes in India and sickened over two million more animals.

The outbreak has triggered devastating income losses for cattle farmers since the disease not only results in deaths but can also lead to decreased milk production, emaciated animals, and birth issues.

The disease, called lumpy skin disease, is spread by insects that drink blood like mosquitoes and ticks. Infected cows and buffaloes get fevers and develop lumps on their skin.

Farmers have experienced severe losses from extreme weather events over the past year: a record-shattering heat wave in India reduced wheat yields in April, insufficient rainfall in eastern states like Jharkhand state shriveled parched winter crops such as pulses, and an unusually intense September rainfall has damaged rice in the north.

And now, the virus has spread to at least 15 states with the number of cow and buffalo deaths nearly doubling in three weeks, the Press Trust of India news agency reported.

The contagion spreading among cattle is having a disproportionate impact on small farmers, many of whom have insulated themselves from the shocks of climate change by rearing cattle for milk, said Devinder Sharma, an agriculture policy expert in northern Chandigarh city.

"It's a serious, serious issue and this (disease) ΓÇª has been growing since the last couple of years," he said, adding that the government figures were likely an undercount of the actual death toll from the disease.

The first cases in South Asia were detected in 2019, and it has since spread to India, China, and Nepal. It was first recorded in Zambia in 1929 and has extended through Africa and more recently to parts of Europe.

Dairy is among the largest agricultural commodities in India, employing 80 million people and contributing to 5% of its economy, per federal data. It's the world's largest milk producer, making up more than a fifth of global production -- but exports are only a fraction of this.

To try and protect the industry, authorities are vaccinating healthy cows using a shot designed for a similar disease while efforts are underway to develop a more effective vaccine.

India's vast hinterland is now punctuated by mass graves of cows. In some places, the carcasses rot in the open and the pained cries of sick animals are resound in villages. Western Rajasthan state has seen the worst impact: 60,000 cattle dead and nearly 1.4 million sickened.

"The disease is contagious. It's now shifting from the west to the east," warned Narendra Mohan Singh, a director at Rajasthan state's Animal Husbandry Department.

In bordering Uttar Pradesh state, India's most populous, the trade and movement of cattle with neighboring states has been curbed. But farmers like Amarnath Sharma in Milkipur village say they have been left in the dark. Three of his five cows are sick and, while he has heard about the viral disease, he doesn't know how to help his livestock.

"If these animals don't get treatment, they'll die," he said.

Farmers in affected states, like the Himalayan Himachal Pradesh, have also urged the government for financial aid.

Meanwhile, a study of the lumpy skin disease virus' genetic makeup found that it was very different from previous versions, said Vinod Scaria, a scientist at the Institute of Genomics and Integrative Biology in New Delhi.

Viruses evolve all the time and not all these changes are harmful to health. But Scaria, who is one of the study's authors, said it exposed the need for continuous monitoring and tracking of diseases since it wasn't clear how the virus evolved in the past two years.

"If you had continuous surveillance, you would be prepared," he said.

Zoom is cutting about 1,300 jobs, or approximately 15% of its workforce. CEO Eric Yuan said in a blog post Tuesday that the company ramped up staffing during the COVID-19 pandemic, when businesses became increasingly reliant on its service as people worked from home. Yuan said Zoom grew three times in size within 24 months to manage demand.