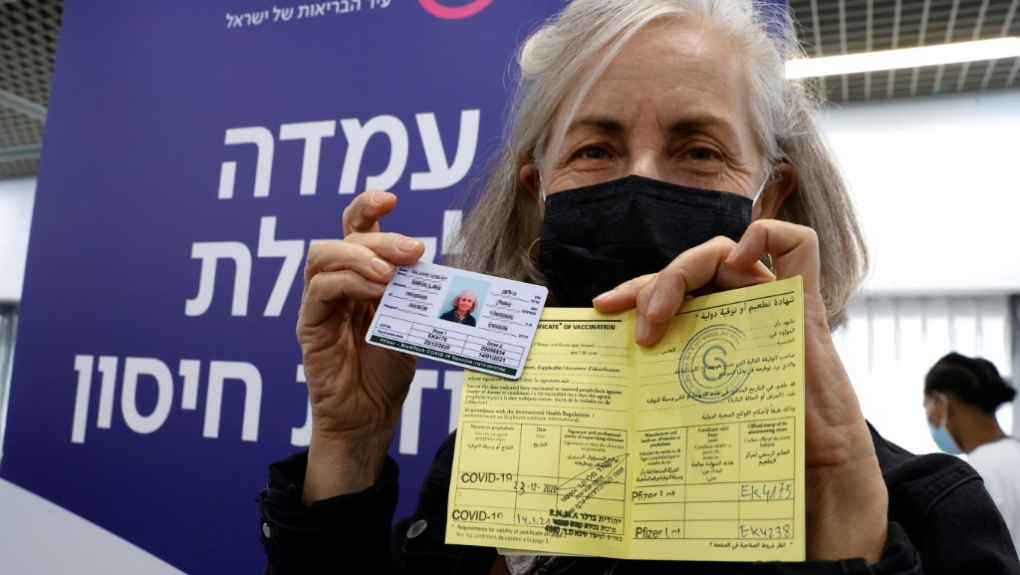 An Israeli medical worker presents her certificate of vaccination after receiving a second Pfizer-BioNTech COVID-19 shot, but the issue of virus passports has divided Europe. (AFP)

PARIS, FRANCE -- The idea of vaccine passports, which would allow people who have been inoculated the freedom to travel, is gaining traction.

While some countries trumpet them as a way out for the hard-hit tourism and airline industries, others are more skeptical with only a tiny percentage of the world's population vaccinated.

As European Union leaders debate the idea Thursday amid claims that it could be divisive and discriminatory, we look at the thorny issue.

EU countries and Gulf emirates that rely on tourism have been the passports' biggest promoters.

Last month Greece called on Brussels to allow "vaccine certificates" for travel within the EU.

And Athens has since signed a deal with Israel to allow vaccinated people to travel between them, with its tourism minister Harry Theocharis floating a similar deal with Britain.

Cyprus -- which relies heavily on British tourists -- says it is also keen on an agreement with Israel, which is in talks with Malta too.

Bulgaria and Italy too say they could pave the way back to "normal activity" .

The Gulf-based airline giants Emirates and Etihad were among the first to say they will test an application that verifies vaccinations.

Sweden and Denmark have already announced electronic certificates that could allow bearers to travel abroad, attend sports or cultural events and even dine in Danish restaurants.

Iceland, not a member of the EU but part of its Schengen travel zone, started issuing digital vaccination certificates in January to ease travel between countries.

Poland and Estonia arrivals who show they have been vaccinated or hold a negative COVID test are exempt from quarantine.

Estonian firm Guardtime is running a pilot vaccination certification scheme and is working with the World Health Organization (WHO) on extending it internationally.

But while the WHO believe it could help  track vaccine rollouts, "for now" they are against using it for travel.

"There are still critical unknowns regarding the efficacy of vaccination in reducing transmission and limited availability of vaccines," it said last month.

According to an AFP tally, only 222 million jabs have so far been given globally  -- mostly of vaccines that require a second dose -- to a world population that now tops 7.8 billion.

More than one in every five people live in countries that have not even started vaccinating.

France and Germany are cool on the vaccine passport idea.

"Not everyone has access to vaccines. And we don't know if they prevent transmission," French Health Minister Olivier Veran insisted in January.

The debate should only be broached "in a few months' time", he said.

Germany is also against giving a vaccinated minority privileges denied everyone else.

But it doesn't rule out the private sector doing it.

"If a restaurant wants to open only to vaccinated people, it would be difficult to forbid that," says Justice Minister Christine Lambrecht.

Belgium is likewise baulking at having activities contingent on vaccination "passports".

As of Thursday, at least 10.17 million people across the EU have been fully vaccinated with two doses -- only 2.3 per cent of the population -- according to AFP's tally from official sources.

Airlines have led the push for vaccine passports, with Australian carrier Qantas the first to call it "a necessity".

Emirates and Etihad, who dominate the Gulf air hubs, said they will trial the digital "IATA Travel Pass" developed by the International Air Transport Association in the next few months, while Air New Zealand signed up to it this week.