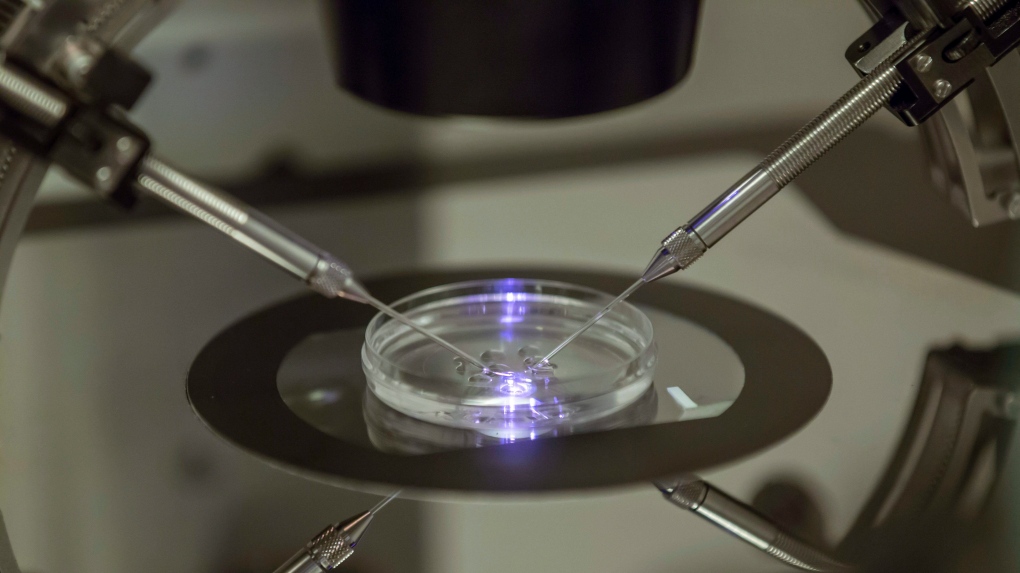 In this Aug. 14, 2013 file photo, an in vitro fertilization embryologist works on a petri dish at a fertility clinic in London. (AP Photo/Sang Tan, File)

TORONTO -- Fertility clinics in Ontario are divided over the directive from the province’s top doctor to pause “non-urgent and non-emergent” procedures.

A new directive in Ontario has put a pause on elective procedures in an effort to alleviate strain on already overwhelmed hospitals, but fertility practices are wondering how much of that directive applies to their services.

“All of the hospitals are having to look at all of their procedures and decide which of these are life-threatening procedures, if patients will suffer severely if their surgeries aren’t done within about 30 days,” Dr. Ari Baratz, reproductive endocrinology and infertility specialist with CReATe Fertility Centre, told CTVNews.ca in a phone interview on Friday.

All specialties, from neurology to fertility, have to determine if their procedures are life saving, and if they could create a potential burden on the medical system.

“But it's not really clear on the out-of-hospital procedures,” he said.

Early on in the pandemic, fertility clinics in Canada closed for about two months, leaving patients in limbo and uncertain when they’d be able to proceed with their treatments.

While the new directive may be up for some interpretation for Baratz, he doesn’t think out-of-hospital fertility clinics pose any sort of risk to Ontario’s current hospital capacities.

With fertility treatments, an egg retrieval is about the most invasive procedure a clinic will do, and chances of major complications are minimal.

“It is very, very rare, probably less than one in 3,000 to 5,000 chance of any major complication with an egg retrieval,” he said.

But not all clinics agree on staying open. In Ontario, three clinics are open for only essential services for their patients. Ottawa Fertility Centre is one of them.

“This was a really tough decision, and it's not a final decision. We're evolving, we're trying to position ourselves to be nimble and pivot as more information becomes available,” Dr. Jeff Haebe, medical director at Ottawa Fertility Centre, told CTVNews.ca in a phone interview on Friday.

He too found the directive unclear and ambiguous, but as it was sent to the clinic he believed it to be applicable.

“If the Chief Medical Officer of Ontario says you need to stop, we have to take that seriously, we need to comply,” he said.

As a fertility doctor, he’s used to advocating for his patients, and he said that fertility treatments are essential.

“Fertility is an essential service. No question. But is it an emergency, or is it an urgent service? And that's where the dilemma comes in because the definition is unclear,” he added. “Suddenly our patients are suffering emotionally, psychologically tremendously. And we really want to get them the treatment that they want, that they need.”

While services at the clinic are pausing, he hopes they’re able to open up again soon, he just needs a more clear directive from the province.

“As soon as we get any kind of notion that we can proceed again, we're going to call them immediately and prioritize them and get them into treatment or resume things, but the sad truth is we don't really have that direction,” he said.

At the time of publication, the province has not returned a request for clarification on the directive.

In Ontario, there is government funding provided for fertility treatments, but the funding is limited each year so there are often long waitlists for funding. People who can pay the costs privately are able to do so without much wait, but for one cycle of IVF it can cost up to $15,000.

Despite closures last year, the Ottawa Fertility Clinic was able to catch up and provide for nearly all of the funded procedures last year, and he’s hopeful for the same after this most recent pause.

“I'm quite optimistic that we would be able to make that back up again in relatively short order, I mean it won't be overnight, but within three to six months I think we will be back to our baseline,” said Haebe.

On the medical side of things, a four to six week pause on treatments is unlikely to have any lasting negative impacts on patients’ fertility.

“Typically one or two months, on the biomedical side, does not have that impact,” said Baratz.

Fertility clinics can also help keep people out of the hospital by finding issues early enough for intervention at their clinics.

“For example, if we find out a patient has an ectopic pregnancy or miscarriage we can often manage that in the clinic,” Dr. Jason Hitkari, president of the Canadian Fertility and Andrology Society, told CTVNews.ca in a phone interview on Friday.

As health-care workers, most of the staff in fertility clinics have at least been offered a first dose of the vaccine, which Hitkari says lessens the risks in clinics even further.

As for the urgency of procedures, fertility changes with age and some patients are at a point where delaying is no longer an option.

“Arguably the biggest problem we face when we're treating patients is advanced reproductive age, and many of our patients are older when they're trying to conceive,” he added.

While a delay may just be a few weeks on paper, it could lead to longer delays down the line.

“Some of these patients have been preparing for several months, and the treatments themselves can go on for a month or more,” Hitkari said.

But whether fertility care is urgent, or an emergency, is up for debate, and bioethicists say it’s not a medically necessary procedure.

“I think it's difficult to argue that fertility treatments, except in very few cases where things have already been unrolling or perhaps in the case of preserving eggs or sperm before undergoing chemotherapy, are reasons that one must leave their home,” Alana Cattapan, assistant professor and Canada Research Chair in the Politics of Reproduction at the University of Waterloo, told CTVNews.ca in a phone interview on Friday.

While she understands the difficulty and heartbreak associated with delaying and pausing these treatments, she points to the bigger picture.

“We've asked people to suspend cancer screening, and hip and knee replacements and a wide variety of other treatments that, I hesitate to use the word elective, because they so dramatically affect the quality of people's lives, and in many cases address the pain that they live with every day,” she said.

When asked for clarification on the directive regarding fertility treatments, a spokesperson with the Ministry of Health said it is left up to clinics to decide.

Fertility treatments are a medical procedure that isn’t done for life-saving purposes.

Cattapan thinks that making the decision to pause treatments at Ottawa Fertility Centre was the right call.

“It's laudable. It's an important decision that they decided to make and that shouldn’t be taken lightly,” she added.

There are also ethical concerns about providing fertility treatments when it has been established that pregnancy raises the risk of severe COVID-19 infections, she said.

'We are empowered to deny travel': Industries and police agencies react to new B.C. travel order

Living through the pandemic may cause varying degrees of trauma: expert

A glimpse of normalcy: A New Zealand band plays to 50,000 fans