OTTAWA -- Variants of concern make up more than half of recently reported new COVID-19 infections, and ongoing strict public health measures will be needed to get the third wave under control, new federal modelling shows.

The federal data shows that more contagious variants of concern are driving the third wave, as a result, national disease and severity indicators “have increased considerably over the past month.”

The Public Health Agency of Canada’s data pegs the introduction of variants of concern into Canada as occurring in mid-December, which was one week before the first variant case was detected, but over the following four months they’ve increasingly become widespread.

On average over the past seven days, Canada has seen more than 8,400 new cases a day and an increasing number of people getting severely ill and ending up in hospital or admitted into intensive care units (ICUs).

“Across the country, the number of daily new cases has more than doubled in the past month. Hospitalizations have also increased, and are still increasing. And there are more contagious and more dangerous variants out there,” he said.

Right now, Canada is seeing the steepest rise in hospitalizations among those aged 40-59 years old, while nationwide there has been a considerable decline in the number of people aged 80 or older who are getting infected, attributed in large part to the high immunization rates in that demographic. 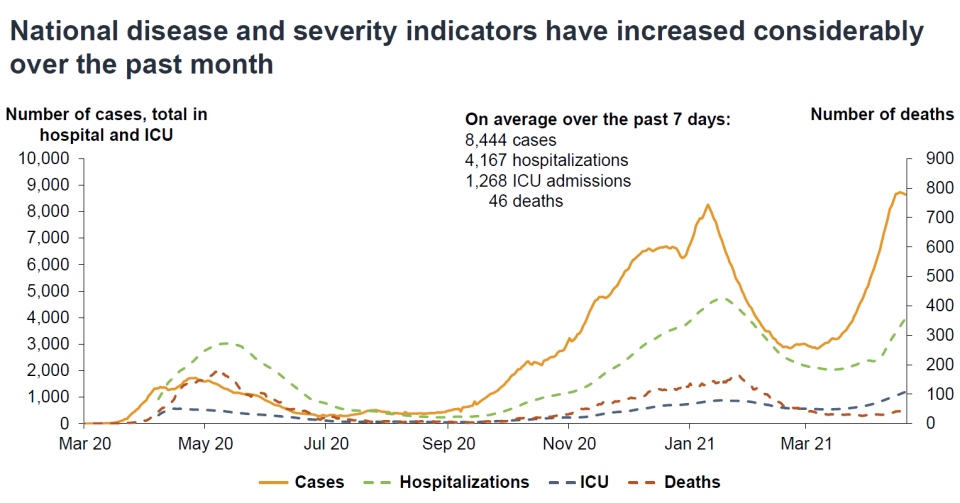 In a small indication that stronger public health restrictions put into place in some provinces since the last modelling update in March are working, the “Rt” or effective reproduction number is below one for the first time in weeks, which federal health officials say is an early sign those precautions are working.

The modelling notes that some recent lockdowns have only just gone into effect and so it may be too soon to determine how much impact they will have on helping further flatten the curve. Though, if people continue to limit their close contacts, stay home as much as possible, and follow other local rules, the third wave could be blunted in the coming weeks.

“The epidemic has dropped out of a growth pattern, primarily driven by recent declines in epidemic growth in Ontario, Quebec, and British Columbia. However, the RT is still at about one in other areas of Canada and needs to be maintained consistently below one to bring the epidemic under lasting control,” said Tam.

The last long-range projection given on March 26 indicated that, even if Canadians maintained the current number of people they come into contact with each day, COVID-19 cases were set to spike to levels not yet experienced in Canada during this pandemic.

Friday’s presentation shows that this projection remains the case, and tough measures therefore need to be maintained to control these highly transmissible variants as vaccines continue to roll out. 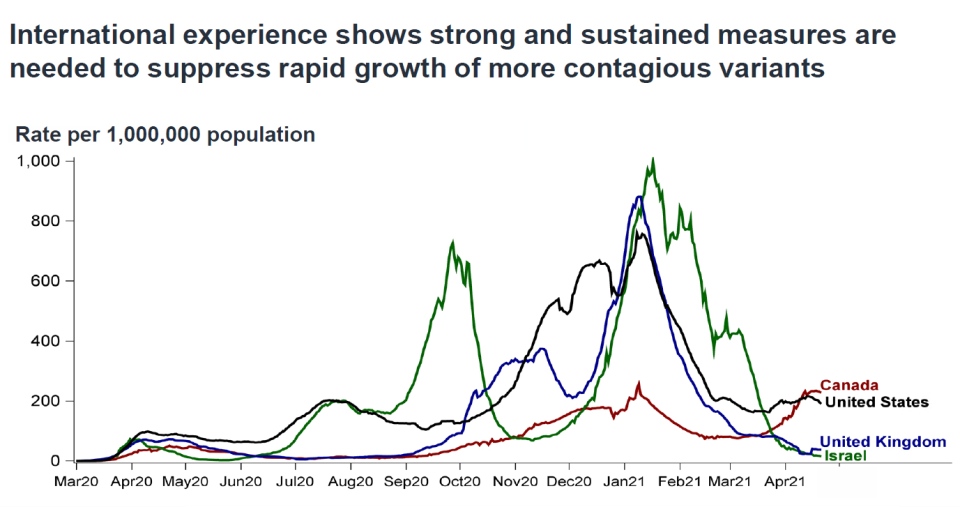 “We can and we will beat back this third wave. What we have to do is clear: We need to stay home and avoid in-person contacts, and if you absolutely need to go out—in other words, for essential reasons – continue to follow public health guidelines,” said the prime minister, noting he’s aware of the level of pandemic fatigue people are feeling, 14 months into the COVID-19 crisis.

The Public Health Agency of Canada predicts, in the next two weeks, Canada will see a slower increase in cases hitting up to 1,281,040, though deaths may slightly increase with up to 24,570 by May 2.

As of the start of Friday's presentation, 23,822 people have died in Canada from COVID-19 since the start of the pandemic, and there have been a total of 1,155,837 cases reported.

On Friday, Tam offered more insight into what the summer might look like, if Canada is able to tamp down on the third wave, providing two potential scenarios that show how essential vaccine uptake will be in Canada returning to some degree of normal life. Even after one dose, it’s possible it could be safe to begin lifting restrictive public health controls and allow more activities this summer.

In addition to vaccine uptake, a faster rollout as well as controlling, tracking, and tracing transmission in the meantime will be essential to any easing of public health measures, she said. 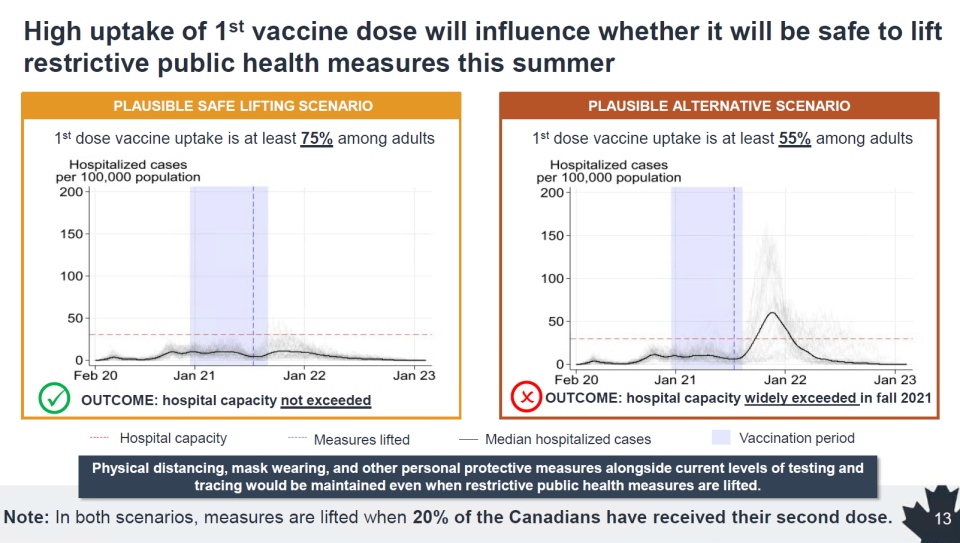 Conservative health critic Michelle Rempel Garner said the federal government needs to do more to ramp up the pace of the rollout given the stark reality of variant spread.

“We need the government to succeed in their efforts to get vaccines to Canadians. However, their failure to secure vaccines in January and February and their failure to secure the border to prevent the spread of variants have cost Canadians their lives and livelihoods. This is Justin Trudeau’s third wave,” said Rempel Garner in a statement following the release of the new modelling data.

In an interview on CTV News Channel, Scientific Director of Ontario’s COVID-19 Science Advisory Table Dr. Peter Juni said he can see things starting to turn around in the months ahead.

“I'm slightly optimistic now… And this is not only about the vaccines… we see a shift, you know, in people really trying to have a lot of solidarity with others,” he said.

Toronto pharmacy goes all out to celebrate vaccine doses