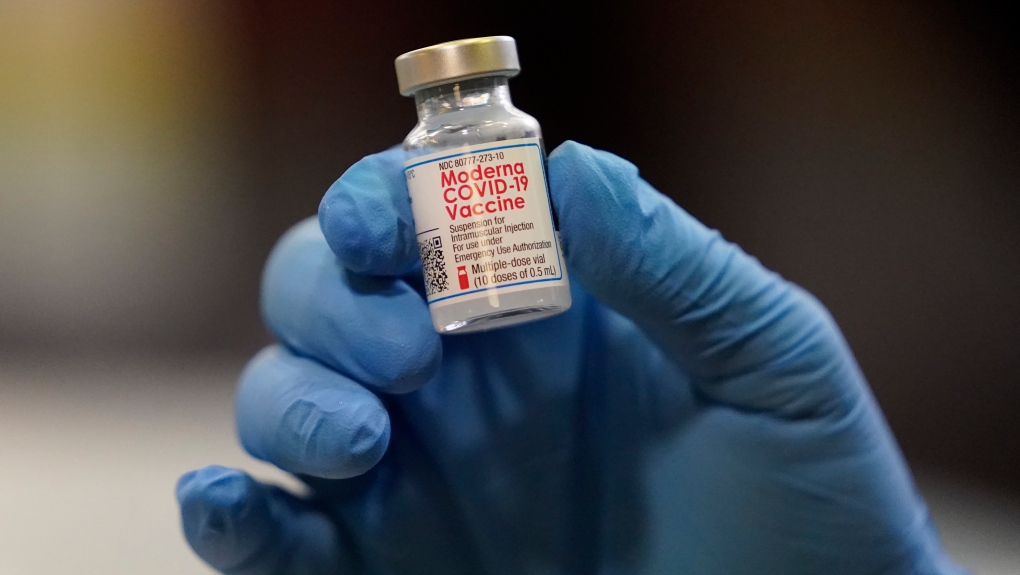 A vial of the Moderna COVID-19 vaccine is displayed at a pop-up vaccine clinic for EMS workers Center in Salt Lake City on January 5, 2021. (THE CANADIAN PRESS/AP, Rick Bowmer)

Moderna Inc said on Wednesday early human trial data shows that a third dose of either its current COVID-19 shot or an experimental new vaccine candidate increases immunity against variants of COVID-19 first found in Brazil and South Africa.

The early data comes from a 40-person trial testing both Moderna's existing shot and a version developed to protect against the South African variant of COVID-19 called mRNA-1273.351. Moderna is also studying a shot that combines both the new and existing vaccine.

The results show that while booster shots of either version of the vaccine increased antibodies against all of the variants of COVID-19 tested in the trial, the new booster had a bigger response against the South African variant than the original vaccine.

"We are encouraged by these new data, which reinforce our confidence that our booster strategy should be protective" against the newer variants of COVID-19, Stephane Bancel, Moderna's chief executive officer, said in a statement.

Both booster shots were well tolerated, with side effects similar to what volunteers in previous studies experienced from the second dose of its vaccine, Moderna said.

The new variants of COVID-19 first discovered in South Africa and Brazil are thought to be more resistant to existing vaccines. Both variants have been detected in the United States but comprise only a small fraction of U.S. cases so far, according to federal data last updated in April.

Moderna's study is looking at levels of antibodies in participants' blood that combat COVID-19, an early indication that they will be protected against the virus. It first announced it was studying ways to protect against the variants of COVID-19 in February.

Moderna expects to share additional data soon on another potential booster shot that mixes its existing COVID-19 vaccine with the newly developed shot.

The U.S. government scientists at the National Institute of Allergy and Infectious Diseases (NIAID) is conducting a separate early stage study of mRNA-1273.351, Moderna said.