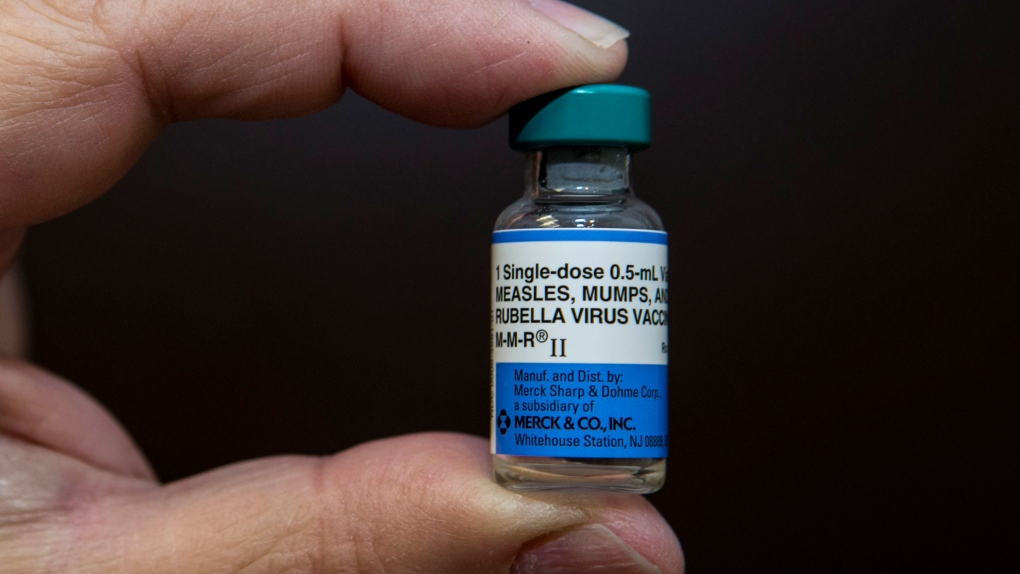 Pediatrician Charles Goodman holds a dose of the measles-mumps-rubella, or MMR, vaccine at his practice in Northridge, Calif., Thursday, Jan. 29, 2015. (AP / Damian Dovarganes)

TORONTO -- A pair of American researchers propose that a clinical trial be conducted to test their hypothesis that the measles, mumps and rubella (MMR) vaccine offers extra protection against COVID-19.

But in the meantime, Dr. Paul Fidel and Dr. Mairi Noverr from Louisiana suggest that nursing home residents, health-care workers and others at higher risk of catching the virus get an MMR vaccine as an added precaution.

“I call it no harm, no foul,” Dr. Fidel told CTVNews.ca in a phone interview Thursday.

“If we are right in our hypothesis, terrific, these people would have the added benefit of potentially not getting the worst of the sequelae if they got infected with COVID-19. But if we're wrong — and we could be wrong — OK, you’ve got new antibodies to measles, mumps and rubella.”

The researchers outlined their early findings in an article for the journal mBio and suggest that the MMR vaccine could help reduce septic inflammation associated with COVID-19 infection.

A growing body of evidence suggests that live attenuated vaccines like the MMR vaccine, which contain a weakened form of the germ that causes a disease, may go beyond providing immunity to the targeted pathogen and can potentially bolster the body’s response to unrelated future infections.

This happens, researchers say, because the vaccines can trigger a response called “trained innate immunity,” which prepares a certain type of immune system cells called leukocytes to respond more effectively against infection.

Fidel and Noverr built on this research with their own lab testing that suggests that MMR vaccines can reduce or prevent severe lung inflammation and sepsis, which are strongly linked to mortality among COVID-19 patients.

The findings are not conclusive and require further testing, but the researchers say there is already evidence to suggest vaccine exposure could have the unintended consequence of causing milder responses to COVID-19.

They point to the fact that rates of COVID-19 infection are very low in children, and children are exposed to more vaccines than older populations. In Ontario, only 2 per cent of all cases involve people under the age of 20, and no deaths have been recorded among the youngest demographic.

The researchers also highlighted the recent COVID-19 outbreak among 995 U.S. sailors on an aircraft carrier. Only one of those sailors was hospitalized, and the researchers pointed out that all U.S. Navy recruits receive MMR vaccinations.

Fidel said it’s important to understand that he and his wife are not hailing the MMR vaccine as some sort of cure for COVID-19. Rather, they think it could be help prevent an individual from severe disease following infection.

He added that anyone who already has their MMR vaccines but is considered at high risk of infection, such as a health-care worker in their 30s or 40s, may want to get a booster.

“It wouldn’t hurt at that level. People in their 20s, I would say I’m not really sure about, people in their 20s have not had a real sustaining problem with COVID-19. But if you get into your 30s and 40s and 50s, I definitely think it’s worth it at that point.”

Millions of Canadians already have the MMR vaccine, which is typically given as two shots to children under the age of six. But older Canadians born before 1970 are generally considered to have acquired natural immunity and may not have the vaccination.

Even if you’re older than 50 and considered naturally immune to MMR, Fidel still recommends getting the shot because he says the immune cells induced by the vaccine do not last a lifetime and could provide an extra degree of protection.

“So yes, it is a good idea for these people to get an MMR vaccination as an adult,” he said.

Last year, UNICEF released a report that found that 287,000 Canadian children born between 2010 and 2017 did not receive their MMR vaccines, the seventh-highest number among high-income countries. The United States topped the list, with 2.6 million unvaccinated children.