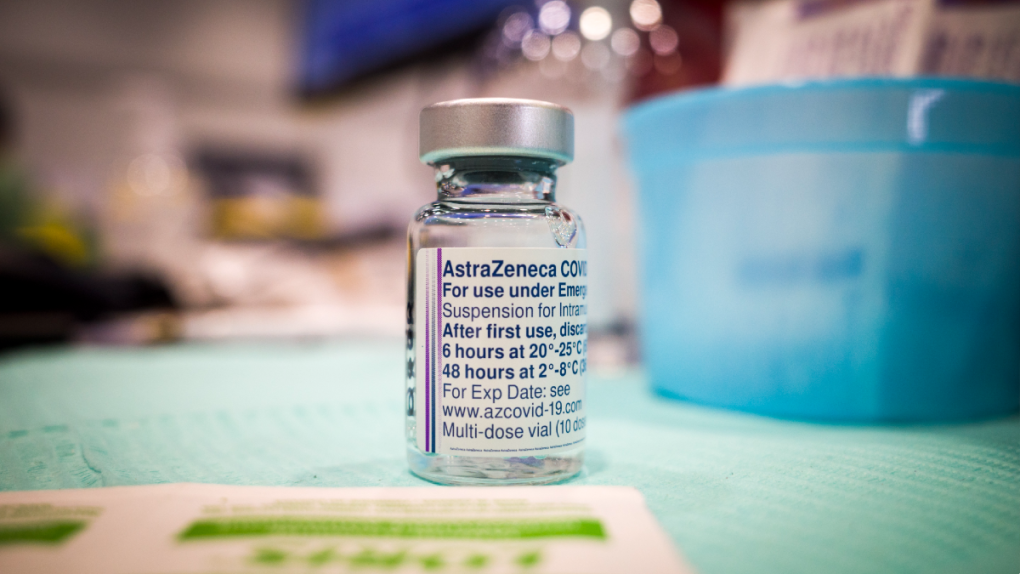 A vial of AstraZeneca vaccine is seen at a mass COVID-19 vaccination clinic in Calgary, Alta., April 22, 2021.(THE CANADIAN PRESS/Jeff McIntosh)

BARRIE -- Health Canada is updating the labels on two of the COVID-19 vaccines approved for use in Canada, to add the autoimmune disorder known as immune thrombocytopenia (ITP) as a potential side effect.

In an advisory issued Tuesday, Health Canada said it is updating the label of the Janssen (Johnson & Johnson) COVID-19 vaccine to “provide additional information about the very rare risk of ITP” and the “rare risk of venous thromboembolism (VTE)” after vaccination.

The label on the Vazxeveria vaccine made by AstraZeneca is also being updated to provide additional information about the “very rare risk” of thrombocytopenia, “including the very rare risk of ITP following vaccination,” the agency said.

According to Health Canada, “very rare cases” of ITP have been reported internationally in those who have received the vaccine from Janssen.

“Similarly, cases of thrombocytopenia including ITP have been reported after receiving Vaxzevria,” the advisory reads.

ITP is an autoimmune disorder that can cause easy or excessive bruising and bleeding, which results from unusually low levels of platelets which help blood clot, Health Canada said.

The agency said these cases typically occur within the first four weeks after an individual has received a vaccine.

“Some of these cases occurred in individuals with a history of ITP,” the statement reads.

According to Health Canada, cases with a fatal outcome have been reported abroad.

Meanwhile, venous thromboembolism (VTE) is a condition where a blood clot forms in a deep vein – usually in a leg, arm or groin -- Health Canada says.

These clots may travel to the lungs, which could block blood supply resulting in “possible life-threatening consequences,” the statement said.

Health Canada says the risk of VTE should “be considered for individuals who are at an increased risk for thromboembolism.”

The agency said healthcare professionals should “be alert to the signs and symptoms of VTE.”

Health Canada says anyone who has received either vaccine and are experiencing the following symptoms should seek prompt medical attention immediately:

Both the AstraZeneca Vazxeveria and Janssen Johnson & Johnson vaccines have been approved for use across the country.

Health Canada says it will continue to work with the manufacturers and domestic and international partners to “gain a better understanding of the potential relationships between COVID-19 vaccines and these adverse events.”

The agency said it will “take further action if necessary."

'We miss our friends': N.Y. town eager for Canadians to return as land border reopens

Despite reopening, the U.S. is still closed to many in world

More than 19K Canadian lives lost than expected because of pandemic: StatCan