Explained: What the Pfizer shortage means for Canada's vaccine rollout 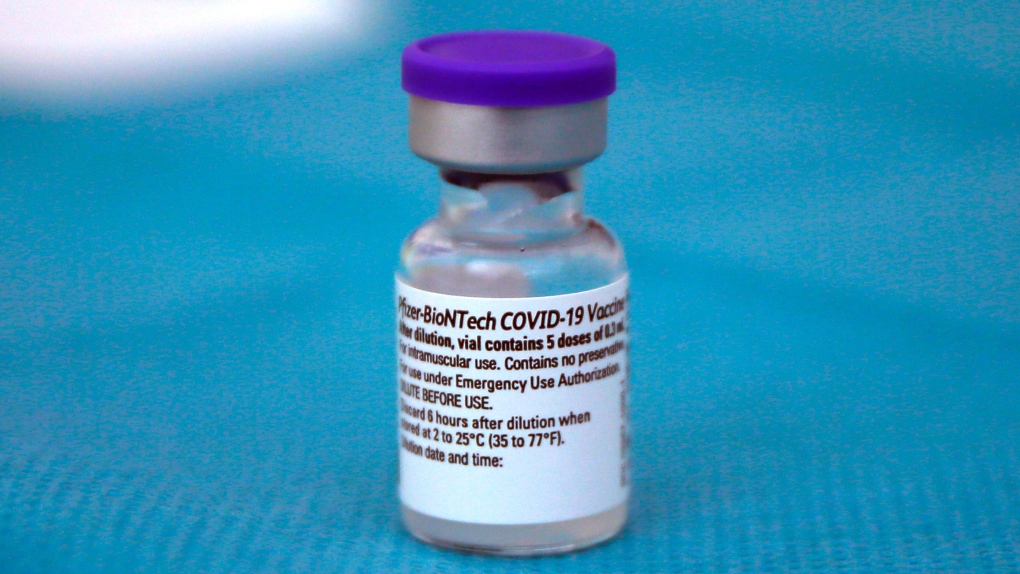 A vial with the Biontech/Pfizer vaccine against COVID-19 disease is ready at the vaccination center of the Dron hospital in Tourcoing, northern France, Tuesday, Jan. 19, 2021. (AP Photo/Michel Spingler)

TORONTO -- Canada won’t receive a single vial of the Pfizer-BioNTech vaccine this week due to an international shortage that has prompted finger-pointing in Ottawa and forced provinces to temporarily delay their vaccine rollouts.

For the next four weeks, Canada’s vaccine deliveries will be cut in half with up to 400,000 doses delayed, according to Maj.-Gen. Dany Fortin, who is leading the country’s vaccine rollout. Canada won’t receive any new deliveries from Pfizer this week, and only one-quarter of the previously promised delivery next week.

Pfizer advised Canada earlier this month that upgrades to its plant in Belgium would temporarily slow production and reduce doses delivered to every country except the United States, which has its own production facility. The factory is expected to return to full production on Feb. 15.

The upgrades are expected to help boost Pfizer’s annual production capacity from 1.3 billion shots in 2021 to up to 2 billion, which would be enough to cover about 13 per cent of the world’s population.

Prime Minister Justin Trudeau spoke directly to Pfizer’s CEO last week and said he was assured that, despite the slowdown, the company will fulfil its contractual promise to deliver four million doses to Canada by the end of March.

The next shipment of Canada’s second approved vaccine, from Moderna, is expected in the first week of February and will include an estimated 230,400 doses.

In the meantime, the temporary shortage has forced provinces and territories to pump the brakes on their vaccine rollout plans. Opposition parties have accused the Liberals of mishandling the vaccine rollout and pointed to other countries, including the U.S. and the U.K., where more people have received their shots.

WHAT DOES THIS MEAN FOR THE VACCINE ROLLOUT?

Federal health officials overseeing Canada’s vaccine plan insist the Pfizer delay is temporary and will not hamper the country’s long-term goal of vaccinating every Canadian by Sept. 30. Fortin said future shipments and “a rapid scale-up of deliveries in the upcoming weeks” will make up for the current shortage.

For now, provinces have started retooling their vaccination plans to prolong the time between vaccinations and, in some cases, are turning people away from new vaccine appointments.

Ontario Premier Doug Ford called the Pfizer shortage “a massive concern” and announced that the province will no longer be able to meet its goal of vaccinating all residents and staff in long-term care homes by Feb. 15.

Ontario, Quebec, Nova Scotia, New Brunswick, Saskatchewan and British Columbia will all slow down their vaccine schedules to stretch whatever vaccine supply they have on hand. The provinces will delay second doses up to 42 days, with Quebec prolonging the wait up to 90 days.

The National Advisory Council On Immunization has advised that the wait period between first and second doses could be extended up to 42 days.

WILL THE SHORTAGE MEAN LONG-TERM DELAYS?

The federal government insists that the country’s long-term vaccine rollout remains on track. Officials released projections last week that suggest Canada will still meet its goal of vaccinating 3 million people by the end of March, accounting for eight per cent of the entire population. A total of 36 million Canadians are expected to be vaccinated by the end of September.

Even if Canada doesn’t approve any more vaccines by the fall, estimates suggest that doses from Pfizer and Moderna will cover 13 million Canadians, or 34 per cent, by June and 36 million, or 95 per cent, by September 30.

Canada’s vaccine rollout could happen even faster if more vaccines are approved. The projections suggest that, based on all vaccines Canada has procured but have yet to be approved, as many as 23 million Canadians could be vaccinated between April and June, accounting for 61 per cent of the population. Canada could have enough doses for up to 73 million people between July on September. In such a scenario, there would be more than enough vaccines for everyone who wants one.

HOW DOES CANADA COMPARE TO OTHER COUNTRIES?

So far, 761,530 people in Canada have received at least their first shot of either the Pfizer or Moderna vaccine, accounting for roughly two per cent of the population.

In the United States, about six per cent of the population has received at least their first shot. However, the U.S. is lagging when it comes to administering available vaccines, with only about half of all shots available still undistributed.

In Israel, which secured a large stock of Pfizer vaccines from the get-go, more than 2.5 million of the country’s 9 million people have been vaccinated. Teenagers between 16 and 18 are now receiving vaccines on the condition that they receive parental permission. https://www.ctvnews.ca/world/israel-expands-vaccination-campaign-to-teens-1.5279506

Canada’s rollout is more on par with countries such as Finland, Austria, Poland, Switzerland and Estonia, all of which have vaccinated around two per cent of their populations.

Canada is hardly alone when it comes to the delays. Mexico, Saudi Arabia, Bahrain and several European countries have all begun slowing down vaccinations, and Italy has threatened to sue Pfizer.

In Ottawa, the Liberals have been criticized for how they’re managing the rollout. Some members of the opposition have called on Trudeau to ask U.S. President Joe Biden for help.

"Why are other countries ahead?" Julian said. "That's the question that the government will have to respond to. And we believe that the government needs to very clearly spell out their plan to accelerate the vaccine distribution across the country.”

The government says it has worked hard to secure as many doses as possible and signed multiple contracts in anticipation of multiple vaccine candidates booming available in the coming months.