But not so long ago, Mathieu Kelly was suffering under a crushing work load, and struggling with his mental health.

The family — Mathieu, his wife Lesley, and their two children — currently live on a 7,000-acre grain farm in Watrous.

But the family used to live in Regina, leaving Lesley to take care of the kids while her husband went to the farm.

Kelly told CTV News that living in Regina meant there was a two-hour commute in one direction just to reach the farm. As a result, the family was frequently split up, with Kelly at the farm during crop season.

“There was long stretches of seeding and harvests […] where we weren’t together,” Kelly said. “That separation really added to it. Weather events, all the fundamentals that go with farming, you know, the day-to-day grind of getting the seed in, tending to the plants, tending to the crop to getting harvest done, […] there’s a lot of pressures during. There’s a lot of ups and downs and emotion that tie into that.

“The anxiety would get so bad I started to have panic attacks.”

Lesley, who is now part of the #BellLetsTalk initiative, also struggled after giving birth to their second child. The pregnancy had been difficult due to medical concerns, and following the birth, she quickly became sleep-deprived.

“I wasn’t eating,” she told CTV News. “I wasn't sleeping, and I just was so emotional I found myself upstairs crying in our master bath.”

Farmers and their families aren’t always mentioned in discussions of those at risk of struggling with mental health, but the reality is that it’s a problem for many in the world of agriculture. 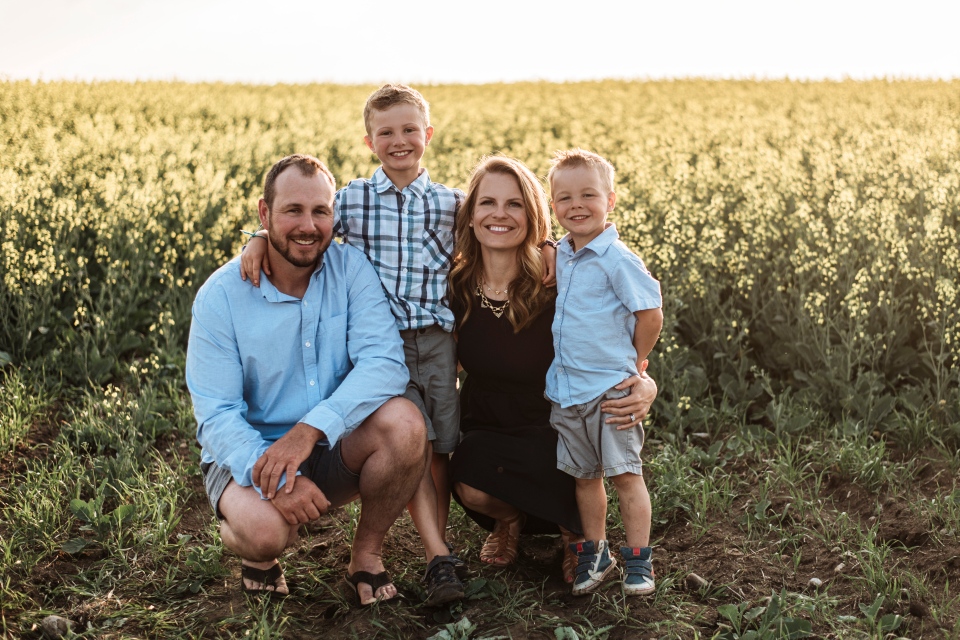 A national survey run between September 2015 and February 2016 by researchers at the University of Guelph found that 58 per cent and 35 per cent met the classifications for anxiety and depression respectively.

“Farmers experience a huge range of stresses from weather, animal disease outbreaks, social isolation, public scrutiny, limited access to care, and cultural barriers,” Dr. Andria Jones-Bitton, the leader of the study, wrote in a submission to the Standing Committee on Agriculture and Agri-Food.

“The current state of mental health among Canadian farmers represents both a serious threat to the well-being of this community and to the overall health and sustainability of the agricultural sector in Canada.”

Lesley mentioned that economic concerns drive a lot of the anxiety, pointing out that a bad storm or a bad crop could cost the family hundreds of thousands of dollars.

The suicide rates for those working in agriculture in North America can be up to 1.5 times higher than the national average, according to the U.S. Centers for Disease Control and Prevention.

Despite this, around 40 per cent of farmers report they would be hesitant to seek help because of fears of what others might think, according to the Do More Agriculture Foundation (Do More Ag).

Lesley said there is a stigma around farmers speaking up.

“We're known as the stoic, heroic, strong but silent type, and if you show signs of weakness, that means […] people might attribute that to being less of a farmer or you're not good at your livelihood,” she said.

Kelly said that at times, his panic attacks would be so debilitating that he had trouble communicating.

“I still currently deal with it, you know, but I've got a lot better management tools,” he said.

One of those things was reaching out to others through a mental health line.

“It was just talking to somebody instead of just a family member all the time,” he said.

Another thing that made a difference to both of them was the decision to share their experiences on a wider scale.

“We were talking amongst ourselves and our family about our struggles and our challenges with mental health, but no one outside of our small circle knew,” Lesley said. “We started to see conversations within the farming community happening on social media, mainly attributed to that stigma and the lack of resources that farmers have.”

So the couple went public with their anxiety and depression, posting a live Periscope to social media.

Lesley said the video went through her struggles with a new baby, and her husband’s struggles on the farm and being disconnected from her.

“[We] really wanted to give people hope and encouragement and knowing that it does get better and we were real life examples of that,” she said.

Kelly added that they wanted to “try to normalize the conversation […] and say that it’s OK to talk about these things and get them out there.”

“It's like pulling a band aid off, it's going to hurt for a few seconds but […] there's a lot of good things that come out of it.”

“The overwhelming response was positive from farmers across Canada and the world,” Lesley said.

She added that they received so many texts, calls, messages and shares from people echoing the sentiment, saying they were all too familiar with the struggles the Kelly family had gone through.

Interested in continuing the conversation, Lesley helped to co-found Do More Ag in 2018, where the work is still going on today.

Adelle Stewart, another co-founder and executive director of Do More Ag, told CTV News that there was no “national voice” for those in agriculture struggling with mental health.

“Our overarching goal is to change the culture of mental health and agriculture,” she said. “Within that, we operate off three main pillars.”

Stewart said when people started talking about their struggles with Do More Ag, “they would line up at the mic and say […] ‘It’s about darn time that we’re talking about this.’

“They would list off the number of people that they have lost to suicide.”

The isolation of long hours on a farm often far away from urban centres means it’s hard for many farmers to access therapy or counselling.

But these days, Lesley and Mathieu Kelly are both doing better -- the family all lives on the farm now, and they’re making sure to get lots of sleep and support each other. Lesley also works as a motivational speaker and runs her own blog.

“We love farming, and we love being farmers,” she said. “We love working in the dirt and growing a crop and having our kids be part of that cycle of life.

Planting the seeds of awareness for the farmers of Canada.

Resources are available in communities across Canada for anyone struggling with anxiety, depression or other mental health concerns.