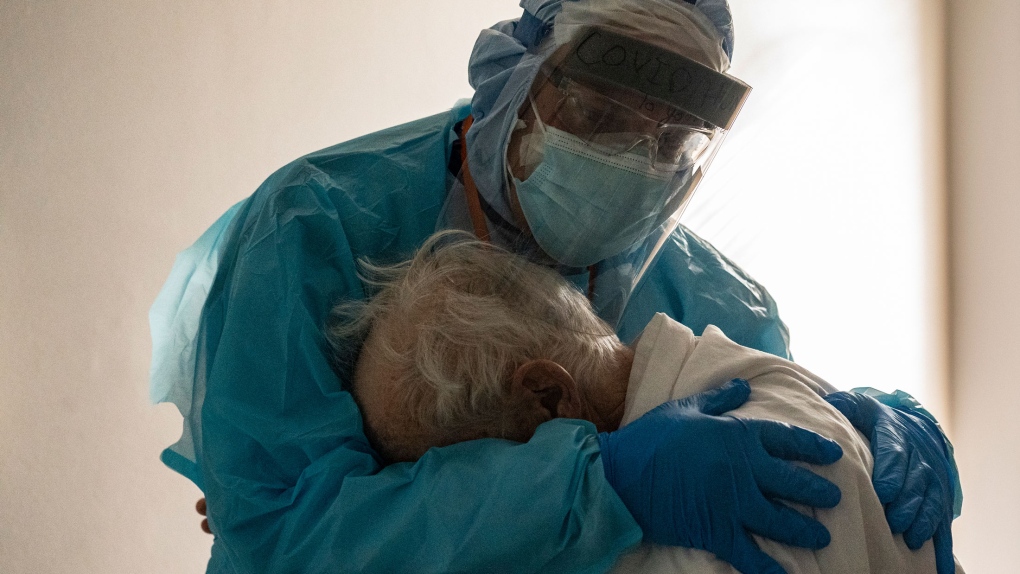 TORONTO -- A Houston doctor who has worked for 256 days straight was seen comforting an elderly man wanting to be with his wife in a photograph that captured the emotional toll of COVID-19 on patients and the resiliency and compassion of health-care workers.

Dr. Joseph Varon, chief of staff at United Memorial Medical Center in Houston, Texas, was photographed by Go Nakamura of Getty Images on American Thanksgiving hugging a patient inside his COVID-19 unit, who said he just wanted “to be with my wife.”

Nakamura had been following Varon around the ward that day when he took the arresting photograph, according to media interviews with the doctor and the photographer. The image shows Varon dressed in full protective gear and standing, embracing an elderly man who has his head buried in the crook of Varon’s right arm.

Varon saw the elderly patient out of his bed and trying to leave his room, he told CNN on Monday.

“He’s crying,” he said. “So I get close to him and I tell him, ‘Why are you crying?’ And the man says, ‘I want to be with my wife.’ So I just grab him and I hold him. I did not know that I was being photographed at the time.”

Nakamura told USA Today that he has visited the United Memorial COVID-19 intensive care unit about 20 times, and had often seen Varon getting close to patients trying to lift their spirits, but that a hug was still rare.

The patient still cannot see his wife at the moment, Varon told CNN, since they are waiting for his tests to come back negative for the virus. He is “doing great”, however, and hopefully will be able to leave the hospital before the end of the week, he added.

“But it’s very difficult. You can imagine -- you are inside the room where people are coming in, in space suits and you have no communication with anybody else -- only by phone if you’re lucky.”

It is especially hard on elderly patients, who often don’t understand the necessary process and restrictions in place, he added, so they often try to get out.

“The patients get so sad, some of them cry, some of them try to escape. We actually had somebody that tried to escape through a window the other day. They are so isolated, they really want out.”

His staff is very good at doing this, said Varon, they all “try to be a little bit more human” but there are too many patients so they are not always able to comfort everyone.

“I was feeling very sorry for him. I was feeling sad, just like him. And I was just recollecting all the patients that I’ve had to do similar things with,” Varon said, when asked what went through his mind as he gave comfort.

Varon, who has been working 256 days non-stop as of Monday, does not know how he copes.

“My nurses have broken down. My nurses cry in the middle of the day because they get so sad because of situations like this -- just seeing a patient crying because he wants to see his family.”

What does get to Varon now he says, is frustration.

Millions of Americans made Thanksgiving travel plans last week despite warnings and pleas from public health experts and healthcare workers to stay home and avoid holiday gatherings. And the country’s top infectious disease expert, Dr. Anthony Fauci, warned that the U.S. could see “surge upon a surge” of new cases in the weeks following Thanksgiving.

Last week, Varon told CNN that his hospital was full and that he had opened two new wings to accommodate the expected rise in coronavirus patients. He was worried about the next six to 12 weeks, saying the country could see “the darkest days in modern American medical history.”

In Texas, where Varon is based, the state reported more than 11,500 infections on Sunday. The state has reported over 1.25 million total cases so far, along with more than 21,900 deaths. Overall, across the United States, hospitalizations due to the virus hit a record high of more than 92,200 patients over the weekend.

“People need to know, I don’t want to be hugging them. They need to do basic things. Keep your social distance, wear your mask, wash your hands and avoid going to places where there are a lot of people. Very simple,” Varon said. “If people do that, health-care workers like me will be able to hopefully rest."