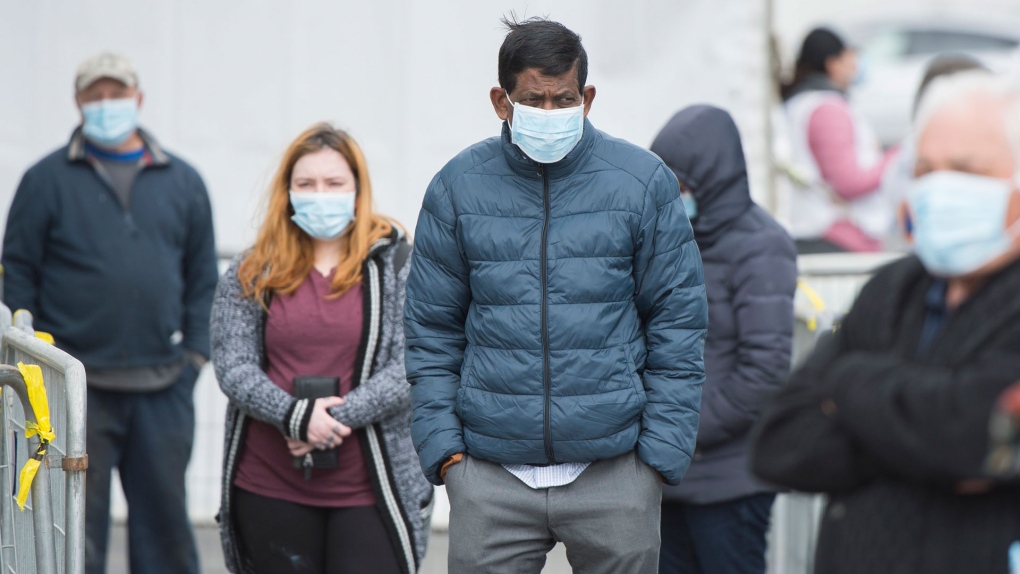 People wait in line at a COVID-19 walk-in test clinic in Montreal North, Sunday, May 10, 2020, as the COVID-19 pandemic continues in Canada and around the world. THE CANADIAN PRESS/Graham Hughes

OTTAWA -- A new survey suggests the recent rise in new COVID-19 cases across Canada comes with a similar increase in support for the mandatory wearing of masks in public places.

The online survey by Leger and the Association for Canadian Studies says 83 per cent of respondents feel governments should order people to wear a mask in all indoor public spaces.

That represented a 16 per cent increase from July, before the recent rise in COVID-19 cases has sparked concerns many parts of the country are entering the dreaded second wave of the pandemic.

Even more -- 87 per cent -- felt wearing a mask was a civic duty because it protects others from COVID-19 while 21 per cent felt it was an infringement on personal freedoms, a decline of six per cent from July.

As for the anti-mask protests that have happened in various parts of the country in recent weeks, 88 per cent of respondents said they opposed the demonstrations while 12 per cent supported them.

The online poll was conducted Sept. 18 to 20 and surveyed 1,538 adult Canadians. It cannot be assigned a margin of error because internet-based polls are not considered random samples.

"In a way, again, the anti-maskers are a minority and not a growing minority in Canada," said Leger executive vice-president Christian Bourque.

Fears of contracting the novel coronavirus that causes the illness known as COVID-19 have indeed been steadily growing since the end of June.

Sixty-one per cent of respondents in this latest poll worried about catching the illness that has infected more than 145,000 Canadians, killing more than 9,200. That compared to 51 per cent in mid-June.

Two-thirds believe it is likely Canada will enter another lockdown in the next three months, while 83 per cent thought the country would experience a second wave of COVID-19 -- three per cent more than last week.

Yet the poll also found more respondents had relaxed over the past month when it came to diligently following public health guidelines in terms of physical distancing, mask-wearing and hand washing.

This report by The Canadian Press was first published Sept. 22, 2020