Cannabis sales soar as Canadians hunker down to stop coronavirus 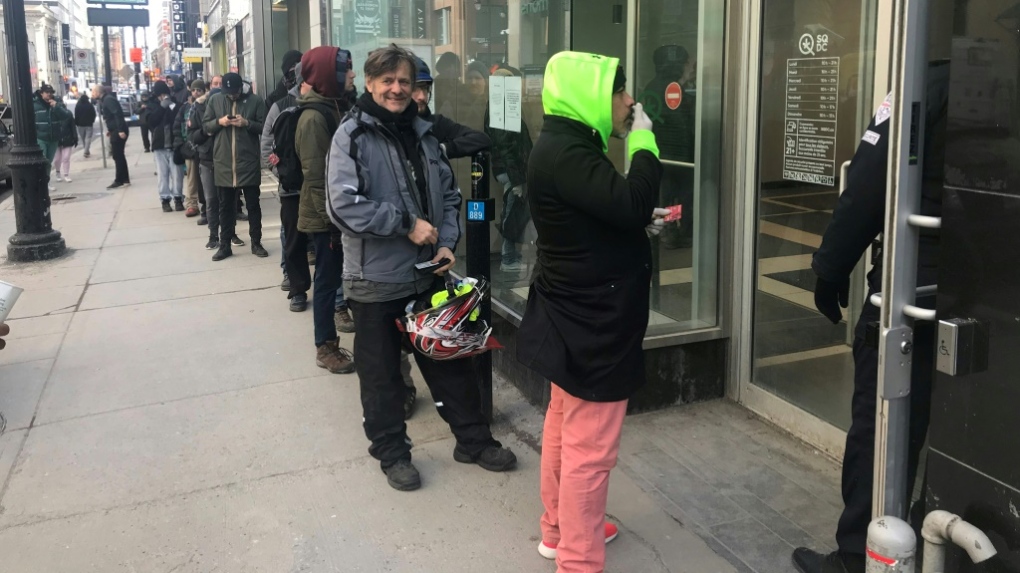 Cannabis consumers line up outside a Montreal sales point for the mood-altering drug March 18, 2020. (AFP)

MONTREAL -- To manage stress in the face of the coronavirus pandemic or just to pass the time under quarantine, Canadians and tourists have been lining up for several days at pot shops and flooding online cannabis retailers' sites to stock up on the mood-altering drug.

In front of the Societe Quebecoise du Cannabis (SQDC) boutique on Sainte-Catherine Street, Montreal's main commercial drive, a long line has formed before it even opens.

"We decided to quarantine, we're just going to look for weed for the 15 days," says Maureen Duflot, 28. She arrived in Montreal Tuesday evening with her partner on the last flight from Paris before Canada closed its borders to foreigners.

Canadian public health authorities have urged travellers to self-isolate for 14 days upon arrival.

"We'll see how it goes inside," she enthuses. "People are super nice, there is a great atmosphere, in contrast to the situation now in France."

Canada decriminalized the recreational use of cannabis in October 2018, becoming only the second country in the world after Uruguay to do so.

"There are those who panic, others who are not taking the situation seriously enough. I decided to come and manage my stress by smoking cannabis," says Michel Benoit, a cameraman who had just learned he would be off work for a period "as a precaution against contracting or spreading the coronavirus."

We have noticed an increase in sales in the past few days," confirms SQDC spokesman Fabrice Giguere, without offering specific sales numbers in accordance with its policy. "The supply is stable, both online and at the branch," he adds.

Another SQDC customer, social worker Kelly Mercer, says she is "not really worried" about the risk of contracting the virus by coming to the store in person, even though nearly 100 cases have been confirmed as of late Wednesday in Quebec, including one death. Nationwide, the count has topped 600 cases, including nine deaths.

"As you can see everybody is social distancing, the stores are taking precautions, not handling cash, cashiers are wearing gloves and using sanitizers on their hands. So I feel they are taking as many precautions as anybody could," says Mercer as she exits the store.

"I smoke regularly, just for fun," she adds. "I just want to make sure I am good for a couple of weeks if my boss gives the word that we're all going to (have to) stay home."

"We encourage people to buy online rather than going to the store," Jordan Sinclair, vice president of communications for Canopy Growth, told AFP.

In Ontario, the largest market for cannabis in Canada, the company is focused on supplying the Ontario Cannabis Store -- a government online portal that has a mandated monopoly on online pot sales in the province.

"The last few days have seen a marked increase in sales volumes at OCS.ca," said Daffyd Roderick, OCS communications director, citing an 80 to 100 per cent increase from normal last weekend.

"People are stocking up on things that are going to make being at home for a long period of time as tolerable as possible. I think alcohol seems to be fitting into that (category) and certainly cannabis is too," concludes Jordan Sinclair.

He added: "People are making purchases with the assumption that they're going to have limited options in the weeks ahead."

Laid off due to COVID-19? Don't expect government cheques right away