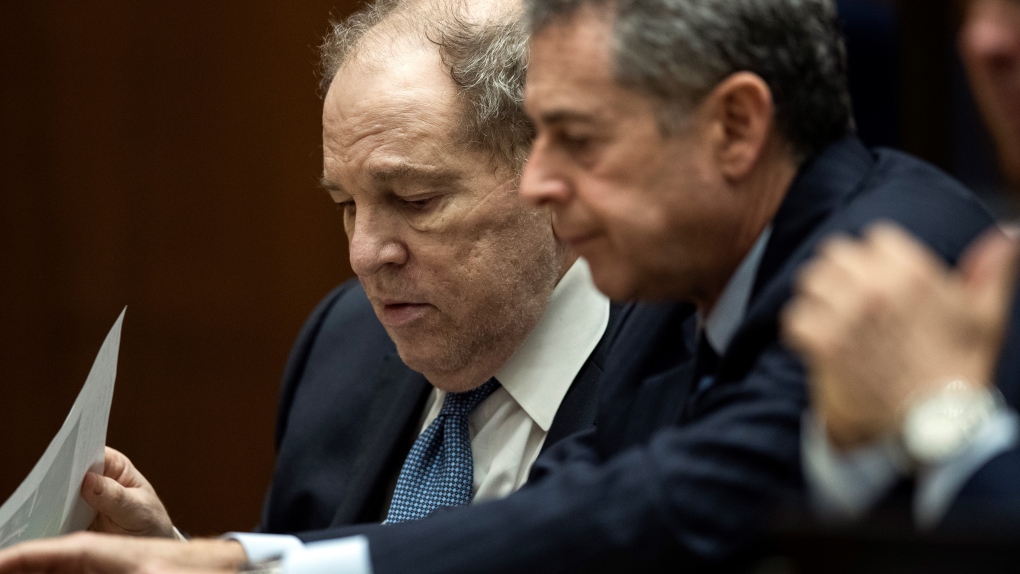 Harvey Weinstein was a "predator" with unmistakable patterns who used his Hollywood power to lure women into meetings, sexually assault them and escape the consequences, a prosecutor said in closing arguments Wednesday at the former movie mogul's Los Angeles trial.

Deputy District Attorney Marlene Martinez said the accusers who testified during the trial entered Weinstein's hotel suites or let him into their hotel rooms with no idea what awaited them.

"Who would suspect that such an entertainment industry titan would be a degenerate rapist?" Deputy District Attorney Marlene Martinez said to jurors.

She constantly emphasized the similarity of the testimony of the four women Weinstein is charged with raping or sexually assaulting and the four other accusers who testified to show his propensity for such acts.

"These are eight women who do not know each other," Martinez said, showing the jury a composite image of all of them on a screen. "They all describe the same conduct by the same man."

After more than five weeks of testimony, jurors, who are expected to get the case Thursday, will be tasked with deciding on two counts of rape and five other counts of sexual assault dating from 2005 to 2013. Weinstein, 70, has pleaded not guilty.

She noted that many of the women before their assaults were reassured by the presence of other women who worked with Weinstein. Those women would suddenly and unexpectedly leave the victims alone and isolated with him, Martinez said.

"He used women to make these women feel comfortable," Martinez said, "to get their guard down."

Three such women testified during the trial. All said they had little memory of the accusers or the meetings they had allegedly led them to, which Martinez called "convenient," suggesting they had betrayed their fellow women.

"Isn't there a girl code?" Martinez said. "Apparently, if you know the defendant, there is no girl code."

She said that during the encounters, Weinstein ignored clear and repeated signs of lack of consent.

She frequently harkened back to a line from a witness who seemed of minimal importance when he was on the stand, Weinstein's LA limo driver Freddy Baroth, who testified that he was often ordered to run red lights when Weinstein was in a hurry, saying "when Harvey wants to go, you go."

She used variations of the image throughout her argument.

Weinstein, sitting at the defence table, did not look across the courtroom at Martinez during her presentation, staring forward, looking at the screen she was projecting images on, and occasionally looking down to make notes.

During their cross-examinations of the women, defence attorneys often challenged them over continued associations with Weinstein after their alleged assaults. Some met with him or emailed him again. Others attended parties and premieres at his invitation. A massage therapist who alleged he assaulted her after one treatment twice agreed to treat him again.

Martinez urged jurors not to make too much of such choices by the women, saying they were the result of deliberate attempts by Weinstein to cover up what he had done to them.

"If his victims were photographed at these parties," she said, "if they took these meetings, how could they accuse him of sexual assault?"

She said he used his power as much after the assaults as he did before and during them.

"He used that power to live his life without the repercussions of his predatory behavior," Martinez said.

The proceedings have coincided with several trials on both coasts of Hollywood men with #MeToo implications, including the rape trial just down the hall of Danny Masterson, which was declared a mistrial while Martinez was giving her closing argument.

If you or someone you know is struggling with sexual assault or trauma, the following resources are available to support people in crisis:

If you are in immediate danger or fear for your safety, you should call 911.

A full list of sexual assault centres in Canada that offer information, advocacy and counselling can be found at ReeseCommunity.com. Resources in your community can be found by entering your postal code.

The sacrifices female killer whales continue to make for their sons well after they are weaned is negatively affecting their reproductive health, according to new scientific research.

Turkiye-Syria earthquake: How to give to rescue and recovery efforts

In the aftermath of the deadly earthquake that struck Syria and Turkiye, Canadians are donating money and supplies to rescue and relief efforts there. CTVNews.ca rounds up ways you can contribute to charities based in Canada and abroad.