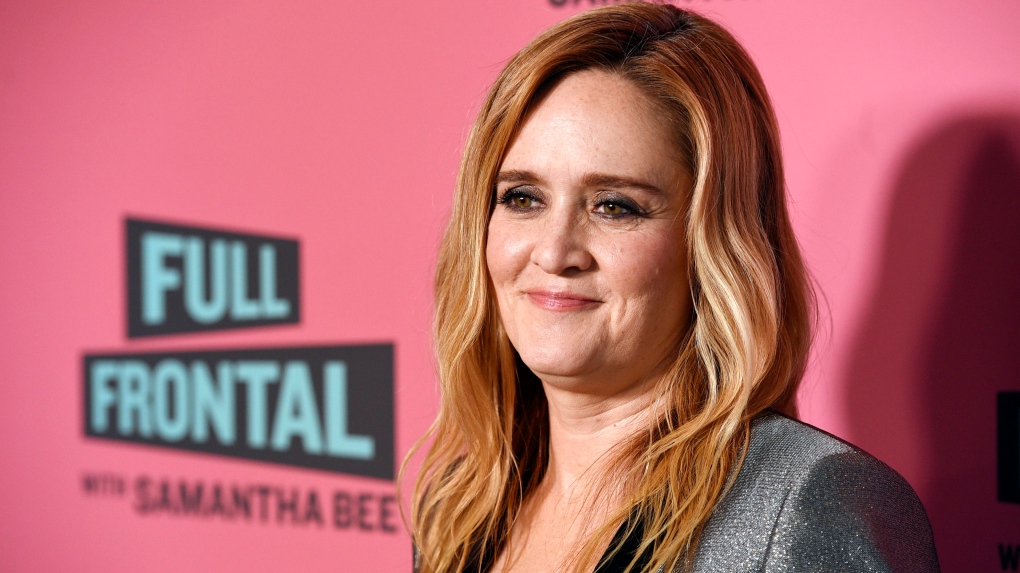 Samantha Bee, host of 'Full Frontal with Samantha Bee,' poses at an Emmy For Your Consideration screening of the television talk show at the Writers Guild Theatre in Beverly Hills, Calif. on May 24, 2018. (Photo by Chris Pizzello/Invision/AP, File)
TORONTO -

On a recent snowy afternoon in New York City, Samantha Bee is gleefully making her way to a cat cafe.

It's a production day for her TBS late-night show "Full Frontal," and in this particular episode, she tackles how disinformation can spread through something as seemingly innocuous as the cute cat videos the internet lives for.

In other words, it's a quintessential episode of the series, which began its seventh season Thursday.

"I'm trying to find more entry points into serious material 1/8that 3/8 spark joy within myself, because times do seem so dark," Bee says over the phone.

"The subject matter of this shoot is very heavy, but the entryway is kittens, which are especially effective for luring people in. And so I have decided that I need to speak of this very serious material with kittens all over my shoulders and I can't wait."

It speaks to the Toronto native's ethos that humour is always the cure, particularly at a time when the world has never been more fraught, between a pandemic and a racial awakening. It's the lens through which "Full Frontal" has operated for seven seasons, along with Bee's interview podcast, "Full Release," which explores how to navigate and find laughter in a shifting world.

As part of its seventh season, Bee is set to remotely host a live episode at the Hot Docs Podcast Festival on Friday. The festival launches Tuesday, and also features conversations with Ira Glass, Michael Lewis, Anna Maria Tremonti, and more.

The podcastpremiered in July 2020, and while it proved to be the perfect pandemic vocation as a solely audio format, Bee had been plotting one for several years.

With guests ranging from Canadian gynecologist Jen Gunter to writer Roxane Gay and U.S. Sen. Elizabeth Warren, "Full Release" offers a space for Bee to focus on a single subject, for up to an hour.

"The show itself is editorial and the podcast is a conversation," says Bee. "It's me being led by my own curiosity and getting a full portrait of a person, hearing their story and understanding where they're coming from.

"I'm not setting an agenda 1/8here 3/8. It's freeform and nice to be able to go off in a direction you don't see coming, which I basically do with everybody, because people will always take you on a journey that you weren't completely expecting."

It also means she's finally getting to spend time with people she actually likes. Because if you know "Full Frontal," then you're well aware that Bee is often speaking to or taking down controversial politicians and policies, from Ted Cruz to Jeb Bush, through a distinctlyfeminist position.

As Bee describes it, her objective on "Full Frontal" has always been "to press the gas pedal and go," knowing time is limited and there are "boxes to be checked."It's made her a polarizing figure on the left and the right, earning her a label she says she personally enjoys: "the queen of confrontation."

While Bee says it's getting harder to book guests who don't share her views, she also says she simply doesn't care what anyone else thinks -- otherwise she'd never get the job done.

"I find it so damaging to care about how something's going to be received," she says. "So I really try hard to push that out of my brain. I don't think that you can make a comedy show like this by crowdsourcing.

"This is a very Canadian approach probably, but I'm not really interested in believing someone else's hyped-up version of me, either. I'd rather just be true to myself."

In 2022, that means asking questions and connecting with leaders to find some form of instruction that might make the world feel a little more manageable.

"It offers me hope, I'm very selfish in my creative endeavors," says Bee, with a chuckle.

"I'm personally seeking catharsis, community and respite. I'm not coming from a place of having all the answers or being so confident in my own opinions, I actually go into it as a blank slate, ready for anything.

"Like everyone else, I need help in my life, I need somebody to tell me what to do. So it's very helpful to talk to people who have expertise in 1/8their 3/8 fields or are just flat-out funny and great."

Her hope is to bring that salvation to Toronto later this month. While the show will be virtual due to COVID-19 restrictions, Bee promises a "very fun, really cool" live episode, which will feature a surprise special guest bound to lead to plenty of meaty discussion, with more than a few laughs.

Humour, after all, "is the only tool in my toolbox," says Bee.

"I'm always seeking a way to find some lightness, like when you watch an overly despairing film -- you need occasional moments of lightness within that overall structure. You need a breather, to look around, to get a snack and come back.

"We all need breathers right now in order to keep our energy going, otherwise you just slowly burn out. So that's what I'm trying to provide -- to myself, and others."

For the complete festival lineup and access to tickets for the live episode of "Full Release," visit hotdocs.ca.