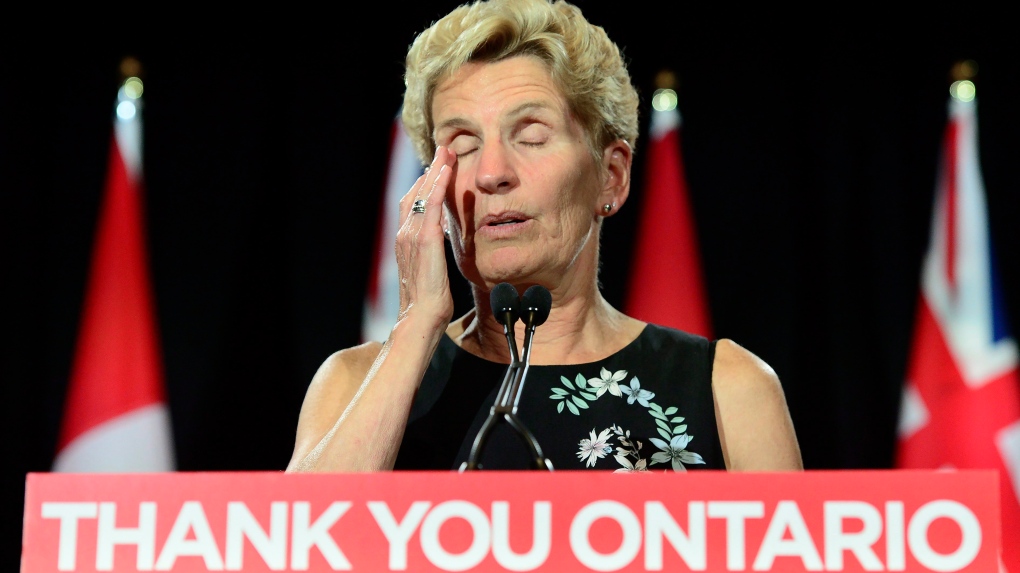 Outgoing Ontario Premier Kathleen Wynne speaks during a press conference at the Ontario Legislature at Queen's Park in Toronto on Friday, June 8, 2018. (THE CANADIAN PRESS/Frank Gunn)

TORONTO -- The resounding defeat of Ontario's Liberals in this week's provincial election saw the party that previously held a majority slip below the number of seats required for official party status in the legislature. Here's a look at what that means.

The broad collapse of Liberal support throughout the province meant the party claimed just seven seats. Current rules dictate that a party needs to have a minimum of eight elected members in order to qualify as an officially recognized party in the legislature.

Is the eight-seat threshold a hard rule?

No. The threshold for official party status has changed several times in the past and can do so again at the discretion of the government of the day. Premier-designate Doug Ford and his majority Progressive Conservative government could theoretically adjust the cutoff point and allow the Liberals to enjoy the numerous benefits of official party status.

What are the benefits of official party status?

Money, for a start. The legislative assembly's internal economy board sets aside funds each year to be distributed among official parties. The Legislative Assembly Act states that official parties can use those funds for research, staff salaries and other purposes the party caucus determines. As things stand now, the Liberals will not have access to any such funds.

But can they still operate as usual in the house?

No. Without official status, the Liberal Members of Provincial Parliament must operate as independents, which means they lose many privileges they were accustomed to in the past. The assembly's standing orders state independent MPPs will be excluded from debates where time is supposed to be divided evenly between recognized parties. In debates without such conditions, independents may contribute if the house speaker calls on them. Participation in question period is also heavily contingent on the speaker. Independent legislators can submit requests to ask a question, and the speaker will decide whether or not to recognize that member. The standing order specifies that the speaker must make sure independent members have the same level of opportunity to participate as members of official party caucuses other than party leaders. Independents are also not entitled to reply to ministerial statements, receive copies of government notices of motion or amendments to bills and other such documents.

So what can independent members still do?

Standing orders state that they can be appointed to standing committees, introduce private members' bills, make comments or ask questions on other members' speeches, put written questions on the order paper and raise points of order.