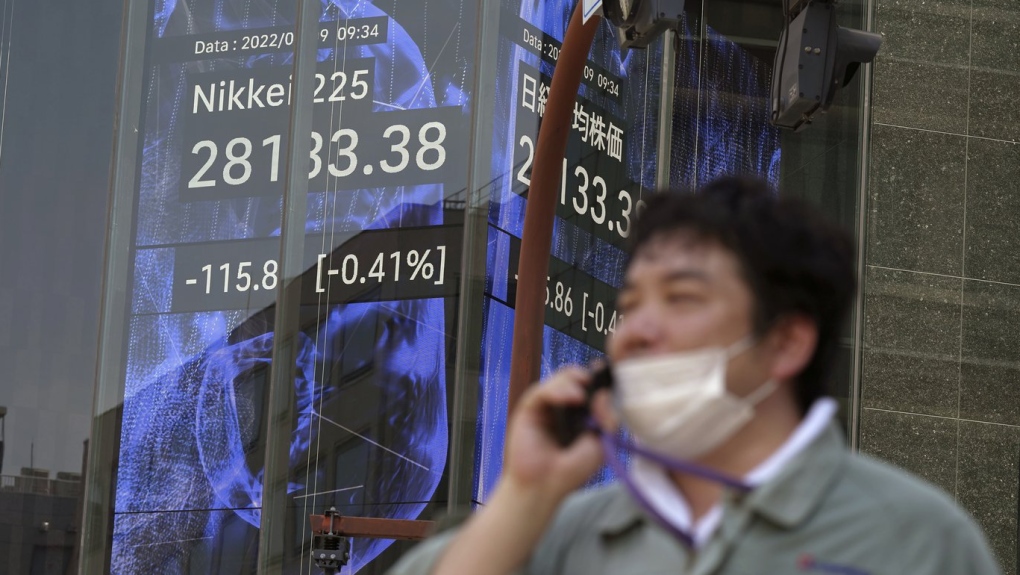 A person wearing a protective mask walks in front of an electronic stock board showing Japan's Nikkei 225 index at a securities firm, Aug. 9, 2022, in Tokyo. (AP Photo/Eugene Hoshiko)

The S&P/TSX composite index was down 90.87 points at 19,578.30. The biggest losses were in the technology sector, which was down 4.08 per cent by the end of trading, as well as the health care sector, which lost 7.92 per cent on Tuesday.

Investors are jittery about the new U.S. Consumer Price Index (CPI) data report, which is expected to be released Wednesday and will show how much inflation rose in the U.S. for the month of July, said Pierre Cleroux, chief economist for the Business Development Bank of Canada.

While investors are hoping for a core inflation reading showing that inflation in the U.S. has already peaked, Cleroux said he thinks that's unlikely.

"I'm not sure we'll see that tomorrow, I think inflation numbers are going to be high," he said. "I think it's going to take a bit more time before inflation goes down."

This week's U.S. inflation data will be coming on the heels of a surprisingly hot U.S. jobs report released last week. While Canada actually lost 31,000 jobs in July, the U.S. added 528,000 jobs in the month, more than double the 250,000 economists had expected.

The rapid pace of job growth south of the border is the reason a majority of analysts now expect the U.S. Federal Reserve will announce a 75-basis-point interest rate increase at its September meeting, likely followed by at least two additional smaller hikes.

Fears that central banks will be too aggressive in their rate increases and trigger a significant recession is one reason why riskier growth stocks like tech are taking a hit.

But while recession is a scary word, Cleroux said, he's not anticipating a large one. He said that while interest rate hikes will slow down growth, that's necessary in the face of clear signs of an overheated economy.

"You can have small negative growth, and you would call that a recession, but it won't be much different than if you have small positive growth," he said. "That's basically what I'm expecting for the Canadian economy."

Energy stocks gained slightly on Tuesday as the price of oil continued to hover around the US$90 mark, after dipping slightly last week. Cleroux said he expects the price of oil to remain elevated due to multiple years of underinvestment in the energy sector and growing global population growth that is driving increased demand.

And while higher prices for gasoline and home heating may be tough on consumers, they also provide a significant lift to Canada's GDP.

"This is actually good for Canada, because we produce a lot of (oil,)" Cleroux said. "Twenty per cent of everything we export is related to oil, so when the oil price is at $90, this is good for the Canadian economy."

The Canadian dollar traded for 77.64 cents US compared with 77.78 cents US on Monday.

Notable stock movements by Canadian companies on Tuesday included Recipe Unlimited Corp., which shot up more than 45 per cent on news that controlling shareholder Fairfax Financial Holdings Ltd. has proposed taking the company private in a deal that values the restaurant chain at $1.2 billion.