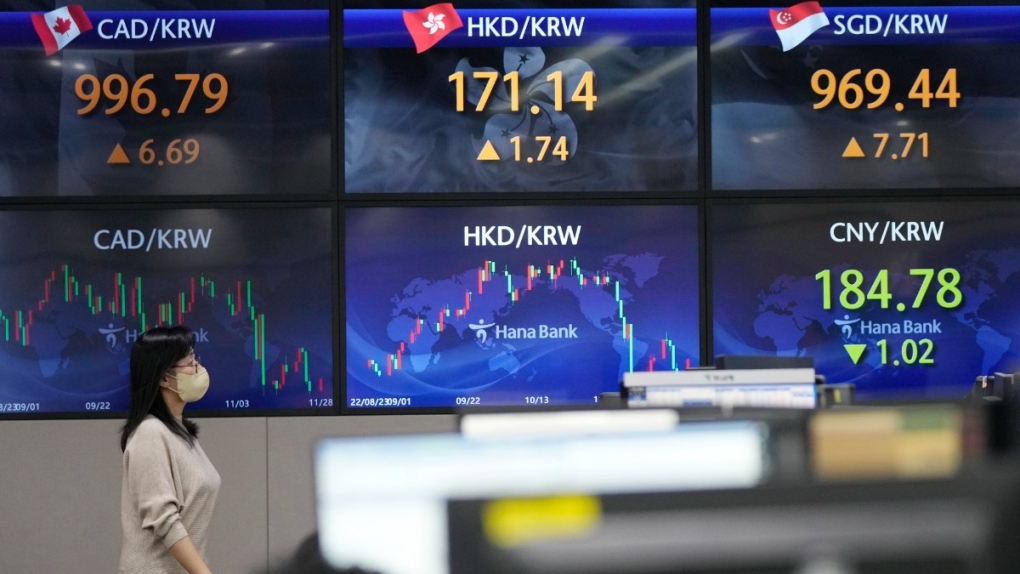 Canada's main stock index was down by more than 150 points or 0.8 per cent Monday, weighed down by losses in energy, financials, utilities and metals, while U.S. indexes tumbled by more than 1.5 per cent.

One of the big stories of the day is the continued concern over China's COVID-19 restrictions as cases rise, said Mike Archibald, vice-president and portfolio manager with AGF Investments Inc.

"That's definitely taking a bit of a bite out of the risk appetite of the market," he said.

This is leading to a higher U.S. dollar which is putting pressure on commodities, said Archibald.

More hawkish language from Fed speakers Monday, though unsurprising, helped bolster expectations that rates will be "higher for longer," he said.

The Canadian dollar traded for 74.33 cents US comparedwith 74.76 cents US on Friday.

Despite the concerns regarding China, oil was actually up Monday, noted Archibald -- but that's because it's recovering some losses after being hit hard overnight.

Headlines speculating that OPEC plus is considering production cuts likely helped claw back some gains on oil during late-morning trading and into the afternoon, he said.

However, energy stocks aren't seeing the same recovery, he said. The TSX energy index was down 1.65 per cent Monday.

Throughout the year, energy stocks have performed better than oil prices, said Archibald, and the question remains of where they're going to meet: either energy stocks will soften or oil prices will go up again.

This "battle going on in the marketplace" is going to break at some point, he said.

"It just remains to be seen which way."

Archibald said bank earnings this week will help give a sense of how the consumer is doing, while U.S. employment data released Friday will indicate the effects of rate hikes in November.

There's "lots of information for the Fed to kind of chew on" going into the final rate decision of the year, he said.

"I still continue to believe we're getting probably fairly close to the end of the hiking cycle."