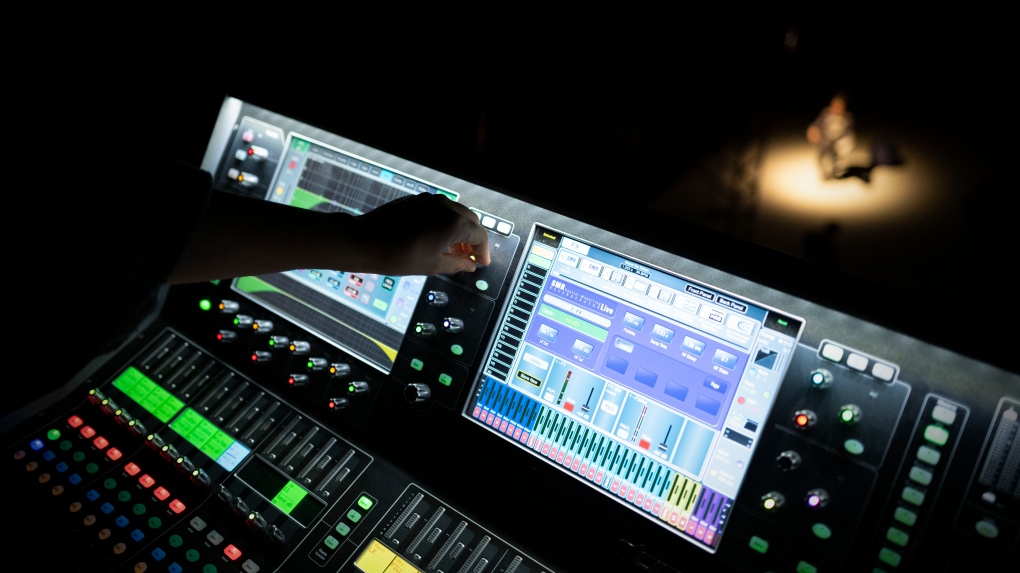 A technician sets up the lighting of the stage of the Trafo House of Contemporary Arts in Budapest, Hungary Sept. 19, 2022. Theaters and other cultural institutions in Hungary are reeling from exponentially growing energy prices, and some plan to close for the winter to avoid the skyrocketing bills. (AP Photo/Bela Szandelszky)
BUDAPEST, Hungary -

A theatre in Hungary's capital will sit through a cold and quiet winter after its managers chose to shut it down rather than pay skyrocketing utility prices that are putting a squeeze on businesses and cultural institutions across Europe.

The 111-year-old Erkel Theatre in Budapest, one of three performance spaces of the prestigious Hungarian State Opera, will close its doors in November after exponentially rising energy bills made heating the 1,800-seat building unsustainable.

"We had to decide how we can save," said Szilveszter Okovacs, director of the Hungarian State Opera. "Even though it hurts to decide to close Erkel for a few months, it's completely rational."

The institution's energy bills have become "more expensive by eightfold, sometimes tenfold … the order of magnitude is huge," Okovacs said. "Something needed to be done because, after all, people's wages … are the most important."

The temporary closure of the Erkel Theatre is just one of many cases of cultural institutions in Hungary struggling to stay afloat as high inflation, a weakening currency and energy costs take a heavy financial toll. It's an example of the pain hitting countries across Europe as energy prices skyrocket because of Russia's war in Ukraine, forcing some factories to shut down, making life more expensive and fuelling fears of an impending recession.

Hungary's government in July declared an "energy emergency" in response to rising prices and supply disruptions linked to Russia's war. It also made cuts to a popular utility subsidy program that since 2014 has kept the bills of Hungarians among the lowest in the 27-member European Union.

As a result, many businesses and households saw natural gas and electric bills jump by as much as 1,000% from one month to the next.

In an effort to curb energy consumption, Hungary's government ordered a 25% reduction in the use of electricity and natural gas in public buildings – including in cultural institutions – and mandated that their heating be kept to a maximum of 18 degrees Celsius (64 degrees Fahrenheit).

Beata Barda, director of the Trafo House of Contemporary Arts in Budapest, said her theatre's electricity bills have risen threefold since June and that there's an "uncertainty factor" in what kind of gas bills they might receive going into winter.

To cut costs, the theatre will stage around two-thirds of its normal winter program, isolate parts of the building that don't need to be heated and reduce the frequency of rehearsals that require full stage lighting.

"We'd like to avoid shutting down or having to cancel performances, so obviously we've got to cut down in all sorts of ways," Barda said.

With inflation in Hungary at nearly 16% and the national currency reaching historic lows against the dollar and euro, households too are struggling with rising prices – something which could lead to a decline in theatre attendance and a subsequent spiral of financial troubles in the cultural industry, she said.

"Our audiences have wallets, too, and their expenses have also risen," Barda said. "How able or willing will they be to come to the theatre? This is a really important question."

In the sprawling Comedy Theatre of Budapest, one of the oldest in the city, the lights in the building's ornamental lobby and winding corridors have been shut off, even on working days, to conserve energy.

"Until now, we could pay our utility bills with the ticket sales of two or three people out of every 100 in the audience," said the theatre's financial director, Zoltan Madi. "Now, we must forward the ticket price of every second person toward paying our utilities."

The struggles faced by theatres in Hungary are not limited to the capital. Local governments around the country have announced that theatres, cinemas, museums and other cultural institutions must close for winter to avoid getting hit with high heating and electricity costs.

As the energy crisis deepens, more of Hungary's theatres could be threatened with closure – something stage director Krisztina Szekely of the Katona Jozsef Theater in Budapest said would have negative consequences for the cultural life of Hungarians.

"I believe that if these institutions falter or are unavailable in any city or society, it will have a significant impact on the mental state of the society," she said.