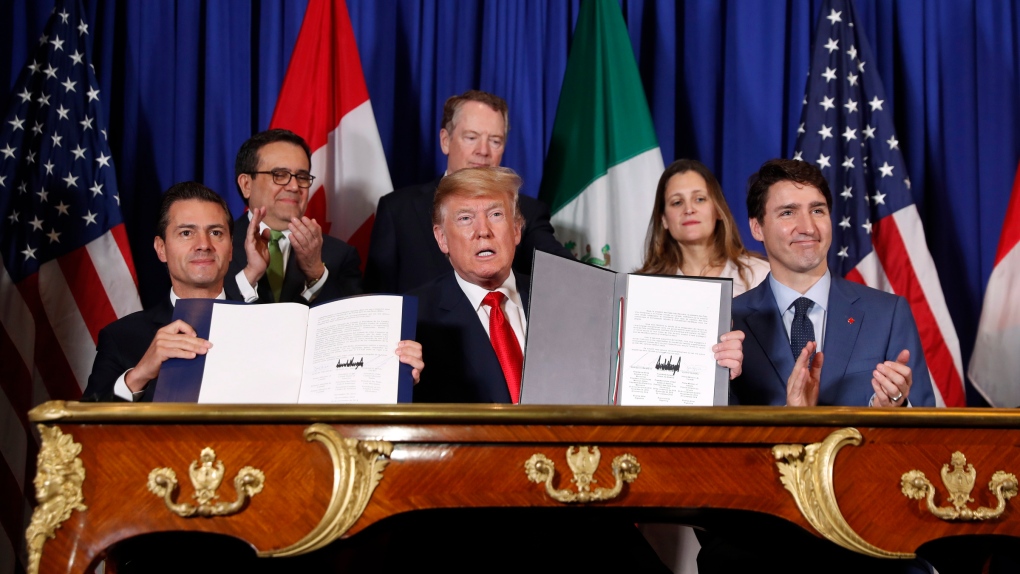 Two weeks ago, the head of a visiting delegation of Canadian parliamentarians told the newly installed Mexican foreign minister his country threw Canada "under the bus" last August when it forged a bilateral trade deal with the United States during the renegotiation of the North American Free Trade Agreement.

A top Mexican trade official tells The Canadian Press that while there may have been a misunderstanding, the U.S. side deal was the work of the previous Mexican government, and Canada and Mexico's new leaders are moving forward constructively.

The side deal between the U.S. and Mexico appeared to blindside the Trudeau government, forcing Foreign Affairs Minister Chrystia Freeland to abort a three-country trip to Europe.

The deal must now be ratified by the legislatures of all three countries, but with turmoil in Washington, and a slowly-shuttering political window in Ottawa with a fall federal election on the horizon, that is far from certain.

Moreover, Canada and Mexico insist the Trump administration will have to lift its punishing tariffs on their steel and aluminum exports, which the mercurial president imposed under a controversial national security clause in U.S. trade law both countries say was illegal.

Canadian and Mexican politicians have been holding a series of regular meetings and exchanges, including a two-day session of parliamentarians in Ottawa this week, and a gathering of the ParlAmericas group, a network of legislators from 35 Western Hemisphere countries, earlier this month.

"We did say very clearly in our last meeting in Mexico with the foreign affairs minister that we were frustrated with the feeling that Mexico was sort of moving away from the trilateral agreement," Nault said in an interview.

Nault said he was concerned about "the way it unfolded at the end," and a perception "that Canada got thrown under the bus by Mexico." He said that represented a break from "what we originally felt was the approach, that is, Mexico and Canada had to be very close to each other to make sure we got a good deal for our countries and make sure the U.S. didn't overtake us."

The Canadian Press has previously reported, citing anonymous sources, that Freeland gave Mexican negotiators an upbraiding over their bilateral deal during an August meeting in Washington.

"I think it's getting better," Nault said this week of the relationship. "Overall, we both have the same position: we want the tariffs removed. We want them removed now. We want to move forward with ratification."

"That was part of the negotiation process ... right now, it's over," de la Mora said in an interview.

"The previous administration in Mexico was responsible for doing that. But at the end of the day, it might have been the case that it actually helped the process."

The Mexico-U.S. side deal marked the start of nearly two months of intense talks between Canadian and American negotiators because the Trump administration imposed a Sept. 30 deadline for Canada to sign on to the U.S.-Mexico pact or potentially be cast adrift.

Lopez Obrador won the Mexican presidency in July, branding himself a socialist reformer dedicated to ending decades of corruption and improving the plight of Mexican workers. His term didn't begin until Dec. 1, which left a window for the Pena Nieto government to finish negotiating a trade deal that Lopez Obrador would have to sell to his country's lawmakers.

During the transition, members of Lopez Obrador's team joined the Mexican negotiators, but de la Mora said they acted as observers, not participants. She said that extended to the Mexican decision to move forward with a bilateral deal without Canada.

"We were not involved in that decision at all," de la Mora said.

"If at some point during the negotiations there were misunderstandings or miscommunications, those moments are over."

She cited the fact that half a dozen of her cabinet colleagues visited Ottawa in November before they were sworn in, in order to forge a good working relationship.

"It would be very positive that the three countries have this agreement approved this year, really. It would be something that would send a really good signal to the markets."