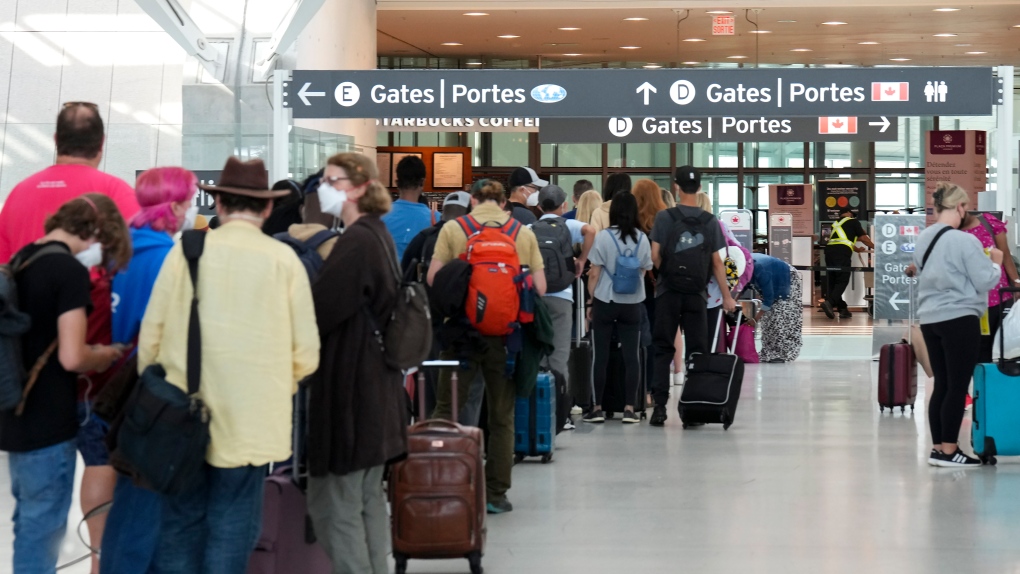 People line up before entering the security zone at Pearson International Airport in Toronto on Friday, August 5, 2022. The Federal Court of Appeal says it will uphold all but one of the rules that bolster compensation for air passengers subjected to delayed flights and damaged luggage.THE CANADIAN PRESS/Nathan Denette
OTTAWA -

The court on Tuesday dismissed the appeal that challenged the validity of the passenger Bill of Rights, with the exception of one regulation that applies to the temporary loss of baggage.

Air Canada and Porter Airlines Inc., along with 16 other appellants that include the International Air Transport Association had argued that the passenger rights charter launched in 2019 violates global standards and should be rendered invalid for international flights.

In court filings, the airlines argued the regulation exceed the Canadian Transportation Agency's authority and went against a multilateral treaty by imposing compensation requirements for flight cancellations or lost baggage that were too stringent.

The CTA and attorney general argued there is no conflict between the passenger protections and the treaty.

The FCA initially turned down a request from the airlines to suspend the Air Passenger Protection Regulations (APPR) in 2020.

This report by The Canadian Press was first published Dec. 6, 2022.

Companies in this story: (TSX: AC)