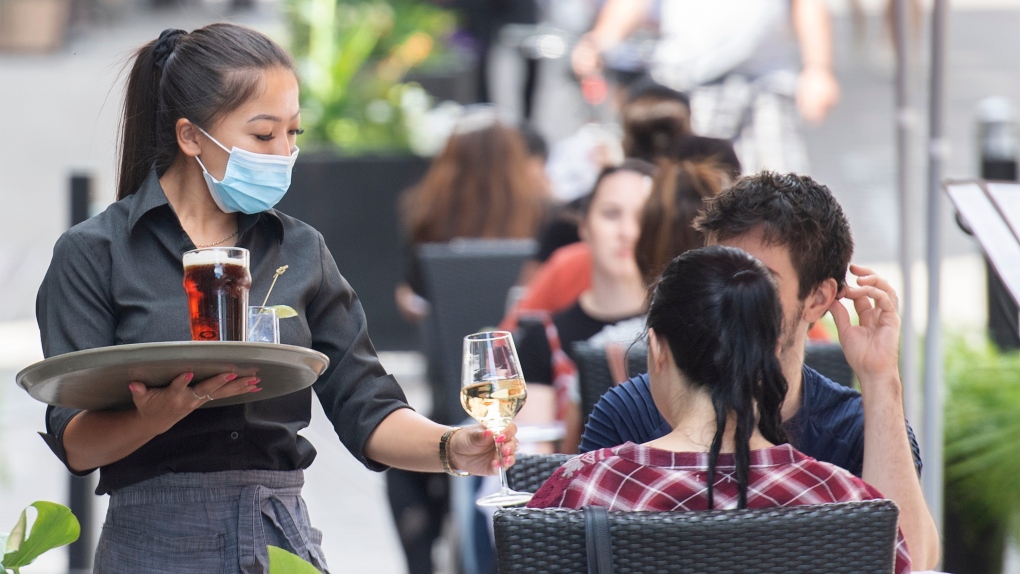 A server wears a face mask as she brings drinks to customers on a terrace in Old Montreal, Sunday, June 13, 2021, as the COVID-19 pandemic continues in Canada and around the world. THE CANADIAN PRESS/Graham Hughes

OTTAWA -- Canada's economy finished a sizzling summer by adding 90,200 jobs in August, the third consecutive monthly increase that brought the country as close as it has been to recouping historic employment losses last year.

The unemployment rate fell to 7.1 per cent for the month, compared with 7.5 per cent in July, bringing the rate to the lowest level since the onset of the pandemic last year.

Economists had expected that Friday's report from Statistics Canada would show another gain as restrictions eased in much of the country, giving another reopening bump to the labour market.

Brendon Bernard, an economist with job-posting website Indeed Canada, said the pace of gains is likely to cool with the arrival of fall because there are fewer restrictions to roll back.

The gains in August were concentrated in full-time work and in the hard-hit service sector, led by gains in accommodation and food services as restrictions eased in much of the country.

Employment increased in Ontario, Alberta, Saskatchewan and Nova Scotia in August, with little or no change in all other provinces. British Columbia remained the lone province with employment above pre-pandemic levels.

Statistics Canada said gains in the service sector pushed employment there back to pre-pandemic levels for the first time, although there is still some areas that are lagging. TD senior economist Sri Thanabalasingam wrote in a note that the level of employment in high-touch industries was 10 per cent, or nearly 300,000 jobs off its pre-pandemic mark.

Overall, employment was within 156,000 jobs, or 0.8 per cent, of the level recorded in February 2020 before the onset of the COVID-19 pandemic, which is the closest the country has been to recouping all the jobs lost during the first wave of COVID-19.

Still, there are a few flies in the ointment, said CIBC senior economist Royce Mendes, who noted the participation rate fell in August, which helped push down the unemployment rate.

Statistics Canada said the unemployment rate would have been 9.1 per cent in August, down from 9.5 per cent in July, had it included in calculations Canadians who wanted to work but didn't search for a job.

"The economy is still a long way from being fully healed," Mendes wrote in a note.

Bernard said a key area of weakness remains in the ranks of the long-term unemployed, who have been out of work for at least six months and accounted for 27.4 per cent of all unemployed in August.

While their numbers dropped by 29,000 to 394,000 in August, long-term unemployment was still 215,000 above pre-pandemic levels. Statistics Canada said about one-quarter of long-term unemployed last worked in March or April 2020 when the pandemic started.

"While there was a bit of improvement in this regard in August, there's still a ways to go to getting the number of Canadians who've been out of work for extended periods of time, back to lower, more normal levels," Bernard said.

Also of note in August was that workers with jobs felt more comfortable searching for new opportunities. Statistics Canada reported the job-changing rate was 0.8 per cent in August, back to pre-pandemic levels after dropping to zero after first-wave lockdowns.

"It's a sign that after over a year of relatively slow job hopping that we finally started to see workers show some confidence and make some changes that they might have held off on over the past year," said Bernard, who noted that job postings on Indeed have been well above pre-pandemic levels for several months.

"This is a really important trend, not just for the health of the labour market from the job-seeker side, but also from employers."

But not all those jobs are being filled. Labour supply hasn't kept pace with the robust demand for workers in high-touch industries, Thanabalasingam said, resulting in staff shortages.

"Career changes, and ongoing health concerns could be possible reasons for the lack of available workers," he said.

This report by The Canadian Press was first published Sept. 10, 2021.