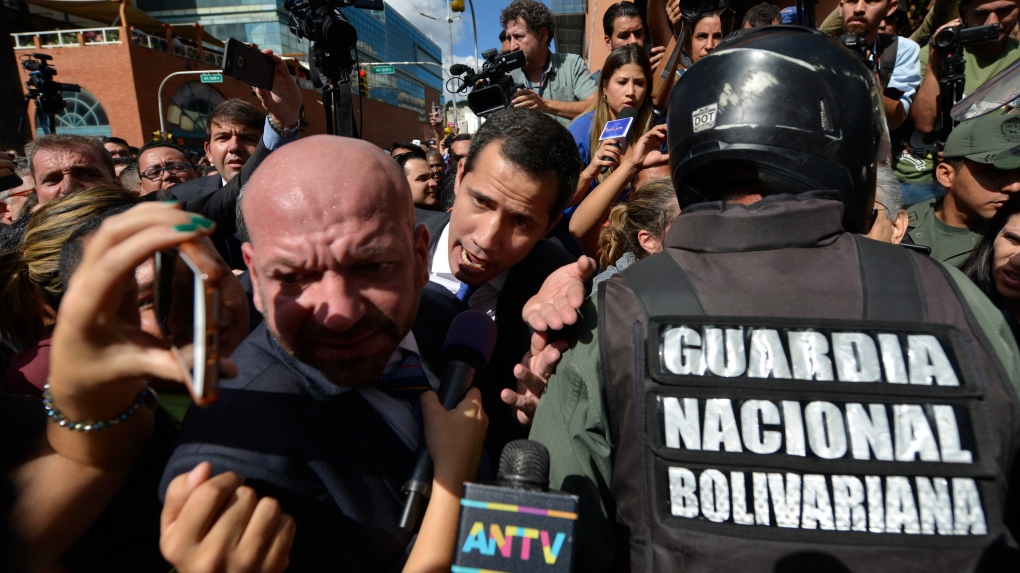 Opposition leader Juan Guaido argues for National Guards to let him and all opposition lawmakers into the National Assembly, outside the legislature in Caracas, Venezuela, Tuesday, Jan. 7, 2020. (AP Photo/Matias Delacroix)

CARACAS, VENEZUELA -- Venezuelan opposition leader Juan Guaido pushed through rows of national guardsmen blocking congress to retake his seat on Tuesday, and in a darkened building with no power he pledged to press forward in his bid to topple the country's socialist president.

The man recognized by the U.S. and over 50 other nations as Venezuela's rightful president burst through the National Assembly's wooden doors along with several dozen opposition lawmakers after navigating their way past state security officers wearing helmets and carrying shields.

"We want to regain Venezuela, damn it!" Guaido said as he pressed through the crowd of guards, lawmakers and journalists.

Once inside, he led opposition lawmakers in boisterously singing the country's anthem. Shortly thereafter, electricity in the building went out, but legislators continued in the dimly lit assembly, shouting into microphones that did not work to declare Guaido the president of the only opposition-controlled federal institution.

"This is a show of what can happen when we are united," Guaido yelled.

The dramatic meeting followed several days of upheaval in which government-backed lawmakers announced they were taking control of the National Assembly. The legislature is the opposition's lone national platform and remains a thorn in President Nicolas Maduro's quest to consolidate power.

The fight for control of the legislature comes as the opposition is struggling to regain its momentum, nearly a year after Guaido declared himself interim president as tens of thousands of Venezuelans took to the streets in protest against Maduro.

The latest brouhaha over the legislature could equip the opposition with new impetus, analysts said, but also gives Maduro an opportunity to make his apparent power-grab look more like another baffling political dispute.

"They do these things in part because they benefit from confusion," said David Smilde, a senior fellow at the Washington Office on Latin America, said of Maduro's government.

Guaido, 36, has served as leader of the National Assembly for the last year and argues that under the constitution, he is Venezuela's interim president on grounds that Maduro's 2018 reelection was not legitimate.

He was expected to be reelected the legislature's president Sunday, but government security forces blocked him and numerous other lawmakers from entering the ornate legislative building.

Instead, Luis Parra, a one-time opposition ally mired in accusations of bribe-taking, claimed he'd won and was the new legislature's president. He contends he obtained 81 votes of the 150 lawmakers present, an accusation Guaido's faction denies. Guaido oversaw a separate session at a Venezuelan newspaper Sunday in which he said that 100 lawmakers voted to renew his term as the leader of congress.

On Tuesday, Parra took a seat, purportedly as the legislature's president, and attempted to begin a session to discuss woes including Venezuela's gas shortages, but he fled hastily with his allies as Guaido made his way into the building.

The legislature's electricity then went off in what the opposition called an attempt to sabotage their session. Guaido and others turned on their cellphone flashlights and proceeded to swear him into office.

The lawmakers were allowed to leave largely peacefully, though one canister of tear gas was fired as they left the legislative grounds.

Though the opposition hailed Tuesday's events as a victory, they face a decidedly uphill battle in the months ahead. Congressional elections are due this year, which will force lawmakers to decide whether to participate in a vote while Maduro still holds power. Many in the opposition contend that fair elections are impossible under Maduro, in part because the National Electoral Council is stacked in his favour.

That could further fracture the opposition at a time when many Venezuelans are reluctant to take to the streets in protest. An estimated 4.5 million have fled and those who remain are struggling to meet basic needs.

Eduardo Salazar, 47, who is unemployed, said the recent upheaval left him with one conclusion: "This is a dictatorship."

While he wouldn't rule out the possibility that Venezuelans might take to the streets again, he said most are now hoping for an international intervention -- something rejected by neighbouring Latin American nations.

Others like Cecilia Liscano, 55, an employee at a plastic surgery clinic, said images of Guaido trying to enter congress by climbing over an iron fence were a compelling signal to Venezuelans who have doubted the opposition's ability to bring about change.

"They're doing what they need to do," she said. "They need to rescue their credibility."

For his part, Parra signalled that he'll put up a fight and continue claiming that he is the president of congress. He posted photos later Tuesday on Twitter showing himself at work in a room with a painting of South America independence hero Simon Bolivar, writing on social media that, "The National Assembly will not be silenced."

Anibal Sanchez, an electoral expert, noted that either side would have needed to have a majority of the assembly's 167 members present to hold a session. Parra has yet to provide a full tally of which lawmakers were present during Sunday's purported vote. Likewise, the opposition did not immediately provide detailed information on how many lawmakers were present on Tuesday.

Sanchez said that Guaido does appear to have risen in popularity since Sunday's events.

"Guaido now has an opportunity to unite all of the opposition," he said.

The opposition leader called for new street protests later this week, though he provided few details.

The opposition leader suffered a diplomatic setback Tuesday when the new left-leaning government of Argentina withdrew the credentials the previous conservative government had given his representative. It no longer considers him interim president.

Maduro went on national television late Tuesday to dismiss the legislative upheaval as a "show."

"Each day it's a clash, a fight amongst themselves," he said, not mentioning his government's support for the minority coalition. "Elections this year will rescue the National Assembly."

Venezuela sits atop vast oil and mineral resources, but it has been imploding economically and socially in recent years, which critics blame on failed socialist rule. The South American nation's 30 million live with soaring inflation and shortages of gasoline, running water and electricity, among basic services.

"I think it's been unifying, but it's not as developed as a unity as they need," Smilde said of the opposition's legislative takeover Tuesday. "The problem is still the elephant in the room: They have to figure out what their strategy is."