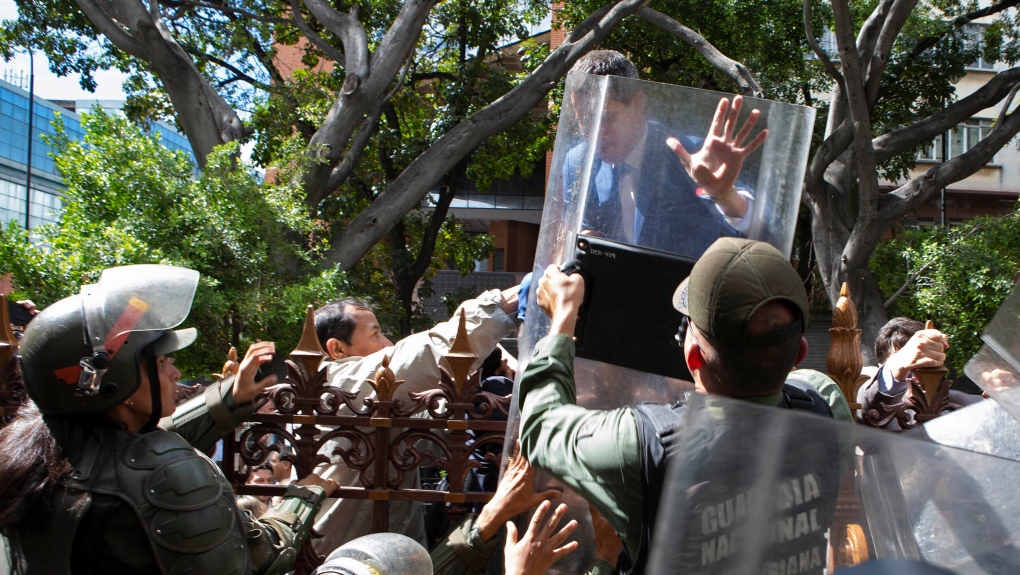 National Assembly President Juan Guaido, Venezuela's opposition leader, tries to climb the fence past National Guards to enter the compound of the Assembly, after he and other opposition lawmakers were blocked by police from entering a session to elect new Assembly leadership in Caracas, Venezuela, Sunday, Jan. 5, 2020. (AP Photo/Andrea Hernandez Briceño)

Hours later, however, a majority of congress members held an emergency meeting at an opposition newspaper office and voted to reelect Guaido as their leader.

Guaido -- whose legal challenge to the socialist government has been based on his role as head of congress -- headed a small group of lawmakers trying to access the neoclassical palace where the opposition-controlled National Assembly was set to elect its leader.

But they were pushed back by national guardsmen wielding heavy riot shields. As scuffles broke out, the U.S.-backed leader tried to mount an iron fence surrounding the legislature, only to be repelled again. His blue suit was ripped apart during the chaotic standoff.

Inside, the situation was similarly rowdy, as a rival slate headed by lawmaker Luis Parra were sworn in as legislative leaders. Opposition leaders immediately denounced the session as a "show" carried out by a group of "traitors" paid off by President Nicolas Maduro.

They complained Parra's election was invalid on numerous grounds -- arguing the session was never officially opened, no quorum count was taken and no formal vote was called -- merely a rushed show of hands as socialist deputiesstormedthe dais

When they gathered later for an impromptu session at the El Nacional newspaper, the last major daily critical of the socialist government, 100 of the legislature's 167 members voted to reelect Guaido for the final year of the Assembly's 2015-2020 term. Several of the lawmakers who have been forced into exile were represented by alternates at the impromptu session.

"The dictatorship has once again committed another mistake," said Guaido shortly after being sworn in.

Still, senior Maduro officials celebrated the gambit as a comeuppance for the 36-year-old lawmaker, who has been struggling to maintain unity in the unwieldy opposition coalition.

"This is what I've been dreaming would happen," Maduro said at an event inaugurating a baseball stadium near Caracas. "The entire country repudiates Juan Guaido as a puppet of American imperialism."

Parra, meanwhile, called a session for Tuesday, setting up a fight over the rival claims to the legislature's leadership in the days ahead.

A year ago, Guaido asserted at a street demonstration that his position as legislative leader made him Venezuela's interim president in place of the "usurper" Maduro, whose 2018 reelection has been rejected as invalid by the legislature, as well as by the U.S., European Union and several Latin American governments. Key opposition figures were barred from running in that election.

There was no indication of weakening support among the more than 50 governments that recognize Guaido as Venezuela's rightful leader. The European Union said it would continue to recognize Guaido, Brazil's government called the initial session an "affront to democracy."

U.S. Secretary of State Mike Pompeo also repeated U.S. recognition of Guaido and congratulated him on the legislative reelection.

"For months corrupt regime officials have engaged in an unlawful, violent, and despicable campaign of arrests, intimidation, and bribery to destroy the last democratic institution in Venezuela, the National Assembly," he said in a statement.

Pompeo described the earlier session at which Parra was sworn in as "a farcical `vote"' at which no quorum was present.

Meanwhile Argentina's newly installed leftist government, which has been at pains to distance itself from the conservative-led backlash against Maduro in Latin America, also criticized the move.

"To impede by force the functioning of the legislative assembly is to condemn oneself to international isolation," Argentina's Foreign Minister Felipe Sola said on Twitter. "The course to follow is exactly the opposite. The asssembly should choose its president with complete legitimacy."

Guaido faced a major test in uniting articulating a new vision in his campaign to remove Maduro. But his reelection for a second straight year as head of congress had been widely expected.

The weeks leading up to Sunday's vote were marked by tension, with the opposition denouncing a covert government campaign to intimidate and bribe lawmakers into voting against Guaido.

Parra is one of a small handful of lawmakers who recently broke with Guaido and have since been expelled from their parties for alleged involvement in a corruption scandal involving allies of Maduro.

Socialist lawmakers argued that Guaido's absence forced them to initiate their session without him. But opposition lawmakers had faced challenges from security forces who set up several barricades downtown.

At one checkpoint, security forces demanded that each lawmaker present credentials, arguing they were under orders to deny entry to several lawmakers banned from carrying out their duties by the loyalist supreme court.

"Is your family in Venezuela?" Guaido asked the young police officers, who stood firmly in nervous silence.

Support for Guaido inside the opposition has taken a hit since several minority parties in November splintered off to create a separate bloc to negotiate directly with Maduro -- something that Guaido has refused, arguing that talks are simply a time-buying exercise aimed at keeping Maduro in power.

The small group of opposition lawmakers who broke with Guaido argue that in stubbornly sticking to a naive plan of removing Maduro by force, he has put his political ambitions above the needs of Venezuelans who have largely tuned out from the political fight while enduring an economy in shambles and under stiff U.S. sanctions.

"In 2019 you represented the hopes of the nation, but today you're its biggest deception," said Jose Brito, one of the lawmakers who turned against Guaido.

Venezuela sits atop vast oil and mineral resources, but it has been imploding economically and socially in recent years. Critics blame the plunge on years of failed socialist rule and corruption, while Maduro's allies say U.S. sanctions are taking a toll on the economy. The South American nation's 30 million people suffer soaring inflation and shortages of gasoline, running water and electricity, among basic services.

An estimated 4.5 million Venezuelans have abandoned their nation in an exodus rivaling war-torn Syria.

Maduro, who took over after the 2013 death of former President Hugo Chavez, says Guaido is a puppet of the United States. Maduro also says he's determined to win control of the National Assembly in elections later this year.

Maduro maintains military backing and control over most branches of the government, despite the deepening crisis.

"Guaido will have to not only re-energize his base and convince them to stay engaged, but keep his coalition in line as well," said Geoff Ramsey, a researcher at the Washington Office on Latin America. "And the clock is ticking."

The story has been corrected to omit reference to lack of a quorum at the earlier session. The issue is in dispute.