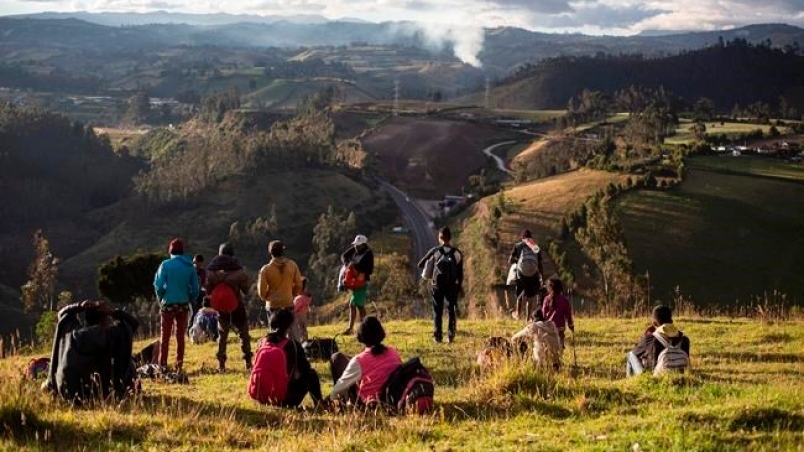 Venezuelan migrants look out from a grassy knoll at the Panamericana Highway, in Urbina, Ecuador, on August 27, 2019. THE CANADIAN PRESS/AP, Edu Leon

South America's borders remain the same, but the outflow of more than 4.5 million Venezuelan refugees in other countries is predicted to grow to more than six million by the end of 2020, according to new estimates from the United Nations refugee agency. That's nearly one in five Venezuelans.

That is putting more stress on Venezuela's neighbours, which are absorbing most of the refugees at a time of rising political uncertainty on the continent.

That includes mass protests that have rocked Chile, causing it to cancel two major international summits, a contested election in Bolivia that has sent longtime president Evo Morales into exile in Mexico, the return of a left-leaning government in Argentina and the ascent of a Trump-style populist in Brazil.

Earlier this year, Canada played a leading role in the Lima Group of the hemisphere's countries -- minus the United States -- that called on the Venezuelan military to back the ouster of the government of Nicolas Maduro. They and about four dozen other countries view Venezuelan opposition leader Juan Guaido as the legitimate interim president.

But months after that push, nothing has changed, and Venezuelans are voting with their feet by continuing to flee the country as the economy, health and education systems collapse, a situation widely blamed on Maduro's mismanagement and corruption.

"It creates a big vacuum in Venezuela. If this situation is prolonged it will be even more difficult to think about the reset of Venezuela," said Renata Dubini, the Americas director for the United Nations High Commissioner for Refugees.

"It will for sure change the profile of Latin America, this movement of people. We are speaking about six million people. It will have an impact no doubt on the future of Venezuela proper and in the receiving countries."

Venezuela was once an oil-rich state, before a rapid economic decline started in 2014, one year after Maduro succeeded long-time socialist Hugo Chavez. Hyperinflation and shortages of food and medicine eventually fuelled the exodus of a skilled, educated population.

Despite the intervention by Canada, its Lima Group allies and other countries, that decline now looks irreversible.

"It's the largest human migration in the history of this hemisphere since the arrival of Europeans," said Ben Rowswell, Canada's last ambassador to Venezuela until diplomatic relations were broken off leading to his expulsion in 2017.

During his first two years in Venezuela, starting in 2014, Rowswell said he noticed the influence and presence of another diaspora community -- the Colombians, many of whom had decamped their country during a decades-long civil war that ended in 2016.

"For 50 years it was Colombia that was the unstable country with extraordinary levels of violence and organized-crime activity. And Colombians were voting with their feet as well and they established themselves in all kinds of Latin American countries," said Rowswell.

"The Venezuelans of 2019 are starting to occupy the role that Colombians have played for so many years. I suspect that Venezuelan communities are going to become relatively permanent fixtures of so many other Latin American countries over the generations to come."

Dubini said there is growing anecdotal evidence that those now fleeing Venezuela have little expectation of ever returning home.

A recent survey by Peru's foreign ministry of new arrivals found that 90 per cent said they didn't want to go back to Venezuela, she said. The 861,000 Venezuelans now in Peru are expected to increase to 978,000 by the end of next year, making the country the second-largest recipient of its refugees after Colombia, which is expected to see its 1.4 million refugees balloon to almost 2.4 million by the end of 2020.

Fleeing Venezuelans are "a very qualified population" from a range of educated professions such as doctors, nurses and engineers, Dubini said, but the host countries will need structural support to cope with the influx.

She said Canada has asked that the World Bank grant Colombia, Peru and Ecuador new and stable financial assistance. That usually means decades-long loans that would come with no-payment grace periods of several years.

This would provide long-term support beyond the Band-Aid of humanitarian assistance, which in Canada's case has amounted to $2.2 million for Venezuela.

It would help Colombia and Peru cope with paying for education and health care for their new Venezuelan residents, she said.

"These countries seem to be willing to integrate Venezuelans, but they cannot do it alone," said Dubini.

Meanwhile, the hollowing-out of Venezuela is posing a separate set of challenges.

"When you have four-and-a-half million people leaving a country, you get a brain drain, you get a deterioration in basic services because medical staff, teaching staff, businesspeople leave. It contributes to the degradation of that society," said Dr. Hugo Slim, the Geneva-based head of policy and human diplomacy at the International Committee of the Red Cross.

His organization, in tandem with the International Federation of the Red Cross and Red Crescent, is trying to bolster Venezuela's fading health-care system by training doctors and providing equipment.

"We're trying to train doctors and military doctors and civilian doctors in health-care work because medical systems are degrading fast as people leave," said Slim. "We are putting the whole weight of the movement into trying to maintain the health system."

Rowswell said that it is not too big a stretch to begin thinking about Venezuela as a new version of Haiti, which has traditionally been the poorest, most aid-dependent country in the Americas.

"I'm painting a rather bleak notion of Venezuela being the new Haiti," he said. "Over the years and years to come, decades to come, there's going to be a requirement for a very significant economic and humanitarian support. That's going to be the challenge for the Canadian government going forward."

This report by The Canadian Press was first published Nov. 15, 2019.