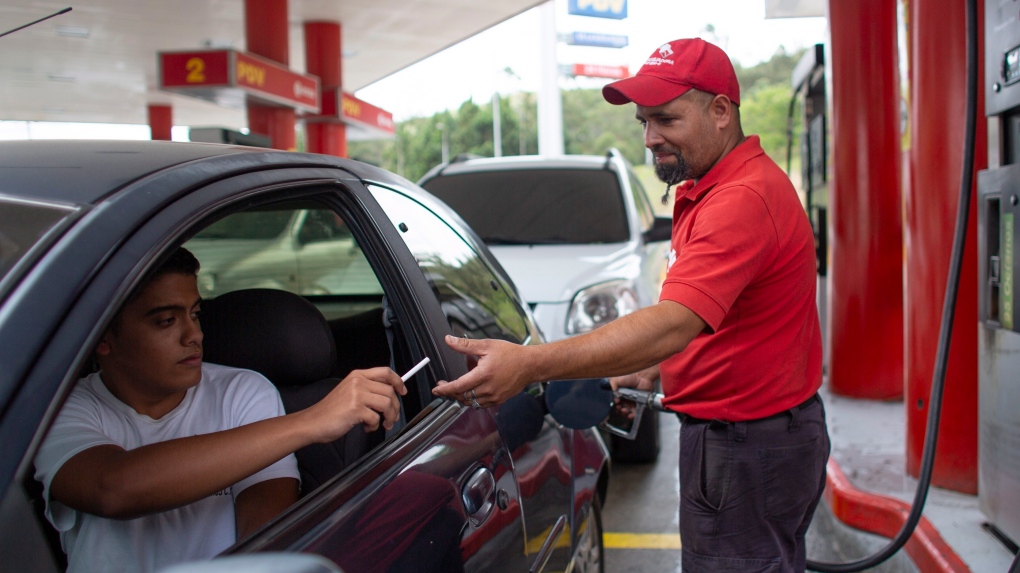 In this Oct. 8, 2019 photo, gas station attendant Leowaldo Sanchez takes a cigarette as payment from a motorist as he fills the tank in San Antonio de los Altos on the outskirts of Caracas, Venezuela. (AP Photo/Ariana Cubillos)

CARACAS, Venezuela -- Motorists in socialist Venezuela have long enjoyed the world's cheapest gasoline, with fuel so heavily subsidized that a full tank these days costs a tiny fraction of a U.S. penny. But the economy is in such shambles that drivers are now paying for fill-ups with a little food, a candy bar or just a cigarette.

Bartering at the pump has taken off as hyperinflation makes Venezuela's paper currency, the bolivar, hard to find and renders some denominations all but worthless, so that nobody will accept them.

Without cash in their wallets, drivers often hand gas station attendants a bag of rice, cooking oil or whatever is within reach.

"You can pay with a cigarette," said Orlando Molina, filling up his subcompact Ford Ka in Caracas. "Heck, it's no secret to anyone that it goes for nothing."

Gas is so dirt-cheap that station attendants don't even know the price. Emptyhanded drivers get waved through, paying nothing at all.

This barter system, while perhaps the envy of cash-strapped drivers outside the country, is just another symptom of bedlam in Venezuela.

The South American nation of roughly 30 million people is gripped by a deepening political and economic crisis. People live with a nagging feeling that anything from violent street protests to a massive power failure could throw their lives into chaos at any moment.

The International Monetary Fund says inflation is expected to hit a staggering200,000% this year. Venezuela dropped five zeros from its currency last year in a futile attempt to keep up with inflation. Soaring prices quickly devoured the new denominations.

The smallest bill in circulation, 50 bolivars, is worth about quarter of a U.S. penny. City buses and even banks don't accept it, arguing it would take such a thick wad of bills to pay for even the most modest items that it wouldn't be worth the trouble. The largest bill, 50,000 bolivars, equals $2.50.

Venezuela, which sits atop the world's largest oil reserves, was once rich. But the economy has fallen into ruin because of what critics say has been two decades of corruption and mismanagement under socialist rule.

President Nicolas Maduro's hold on power is under challenge from opposition politician Juan Guaido, who has the backing of the United States and more than 50 other countries that contend Maduro's re-election in 2018 was crooked.

Gasoline prices are a deadly serious matter in Venezuela. Roughly 300 people died in 1989 during riots that erupted after the country's president at the time ordered a modest rise in fuel prices.

Amid the economic crash, Maduro has not substantially raised gas prices, a strategy that was probably reinforced after violent protests recently forced the president of Ecuador to back off plans to end fuel subsidies there.

Maduro has acknowledged that the state-run oil company, PDVSA, loses billions of dollars a year because of the discrepancy between the price of gasoline and the costs of production.

At the most, a tank of Venezuelan gasoline has historically cost the equivalent of a few U.S. pennies. Because of inflation and devaluation of the currency, that has plunged even further.

Caracas resident Maria Perez filled up one day recently, handing the attendant the equivalent of one penny, the smallest bill she had. Most drivers would gladly pay the true price of gas if the government would use the proceeds to invest in services, she said.

"Our roads are unbearable," she said while running errands on her day off with her mother in the passenger seat. "There are huge holes -- craters -- that not only damage our cars but also put our own lives at risk."

Gasoline in Venezuela's capital of Caracas, the seat of power and largest population centre, has so far been immune from the shortages and mile-long lines that plague other parts of the country and can leave drivers waiting for days to reach the pump. Officials blame the shortages on U.S. sanctions against PDVSA.

Service station attendant Orlando Godoy stacked the food and drinks he received from drivers on top of the pumps -- a bag of cooking flour, cooking oil, a bottle of mango juice. He earns minimum wage, which amounts to a few dollars a month, so the food helps feed his family.

"A lot of people show up saying they don't have cash to pay," he said. "The idea is to help people because Venezuelans are going through a rough situation."