U.S. says 'all options' on the table over Russian troop buildup near Ukraine 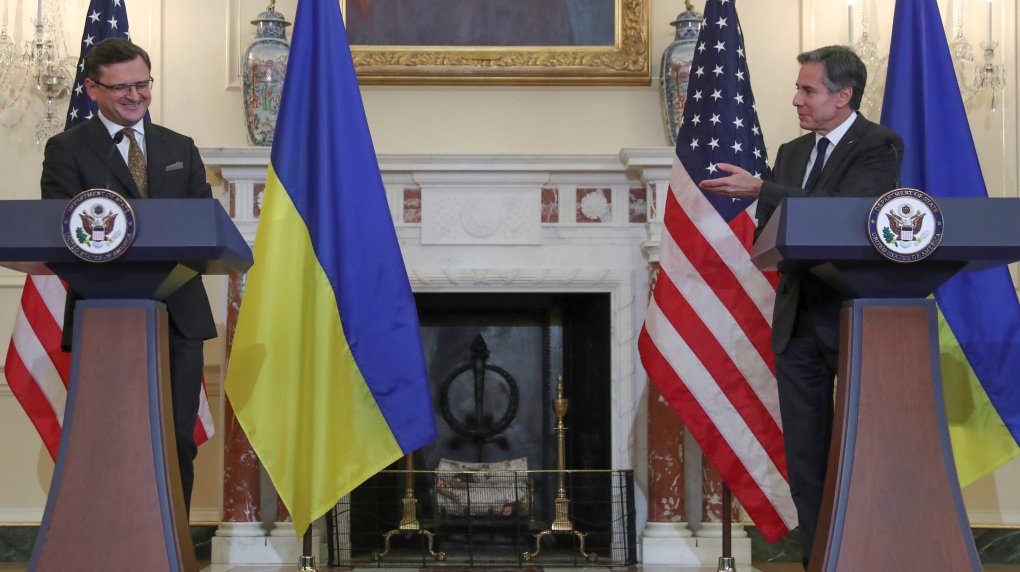 WASHINGTON -- (Reuters) - All options are on the table in how to respond to Russia's "large and unusual" troop buildup near Ukraine's border, and the NATO alliance will decide on the next move following consultations next week, the State Department's top U.S. diplomat for European affairs said on Friday.

"As you can appreciate, all options are on the table and there's a toolkit that includes a whole range of options," Assistant Secretary of State for European and Eurasian Affairs Karen Donfried told reporters in a telephone briefing.

U.S. President Joe Biden said he was concerned about the situation in Ukraine, repeated Washington's support for Ukraine's territorial integrity and added that he will "in all probability" speak with his Ukrainian and Russian counterparts Volodymyr Zelenskiy and Vladimir Putin.

The comments came as U.S. Secretary of State Antony Blinken is heading to Latvia and Sweden next week to attend meetings of NATO and the Organization for Security and Cooperation in Europe (OSCE). Donfried said Moscow's "large and unusual" troop buildup would top the agenda at the NATO summit.

"It's now for the alliance to decide what are the next moves that NATO wants to take," Donfried said. "Next week, we will talk about our assessment of what's happening on Russia's border with Ukraine and we will begin that conversation of what are the options that are on the table and what it is that NATO as an alliance would like to do together," she said.

U.S., NATO and Ukrainian officials have raised the alarm in recent weeks over what they say are unusual Russian troop movements closer to Ukraine, suggesting that Moscow may be poised to launch an attack on its neighbor, accusations Russia has rejected as fear-mongering.

Asked if Blinken was going to meet with Russian Foreign Minister Sergei Lavrov while in Stockholm, Donfried said she had no such announcements to make but added: "Stay tuned."

On Friday, U.S. National Security Advisor Jake Sullivan and Ukraine's head of presidential administration, Andriy Yermak, in a call spoke about their concerns over Russian military activities near Ukraine's border.

The head of Ukraine's military intelligence told the Military Times outlet this weekend that Russia had more than 92,000 troops massed around Ukraine's borders and was preparing for an attack by the end of January or beginning of February.

Moscow has dismissed such suggestions as inflammatory and said it was not threatening anyone and defended its right to deploy its troops as it wished.

Donfried was asked what the United States saw specifically different in Russia's troop buildup this time, but she did not elaborate aside from saying it was "large and unusual."

Russia's intentions remain unclear, and East-West tensions are running high with Ukraine, Russia and NATO all conducting military drills and Moscow accusing Washington of rehearsing a nuclear attack on Russia earlier this month.

Asked if recent escalation has prompted Washington to consider more seriously deploying permanent troops in NATO's eastern flank, Donfried did not elaborate on the specific point but said NATO foreign ministers next week would be discussing the wider strategy for the alliance's posturing in the 21st century.

At the OSCE meeting in Stockholm, Donfried said, Blinken will also raise Russia's occupation of Ukrainian and Georgian territories, the conflict in Nagorno-Karabakh and the crisis in Belarus.