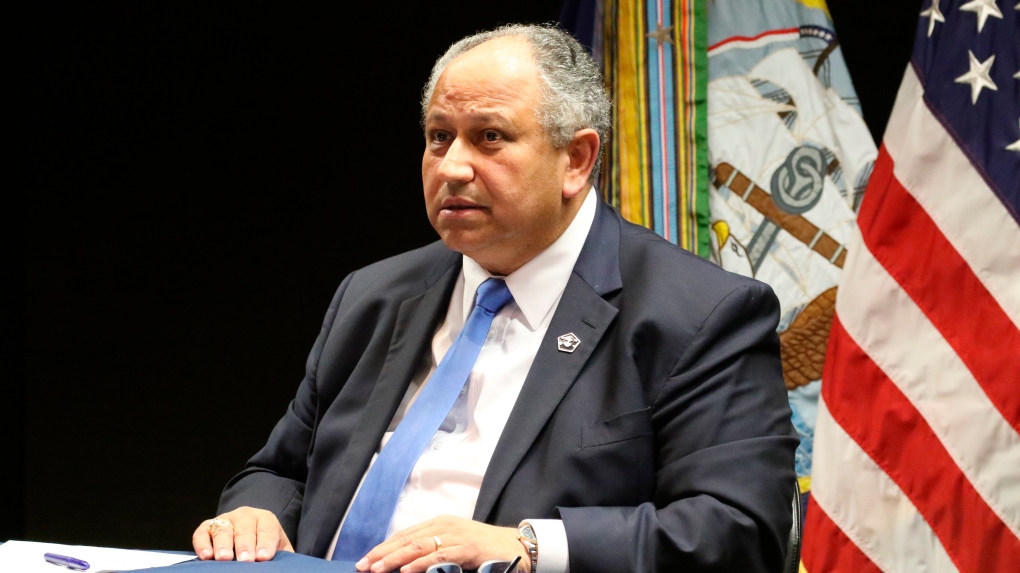 Navy Secretary Carlos Del Toro speaks at a news conference at Joint Base Pearl Harbor-Hickam on Monday, Dec. 6, 2021. The U.S. Navy announced Monday that it is suspending use of a massive World War II-era fuel storage complex above a Hawaii aquifer that supplies nearly 20 per cent of Honolulu's drinking water following days of complaints that tap water smells like fuel and has sickened some people. (AP Photo/Audrey McAvoy)

HONOLULU -- The U.S. Navy is contesting orders from Hawaii to suspend use of fuel tanks and drain them at a complex above an aquifer that supplies nearly 20 per cent of Honolulu's drinking water until certain conditions are met.

The Navy has already said it was suspending use of the massive World War II-era fuel storage complex near Pearl Harbor following days of complaints that tap water smells like fuel and has sickened some people.

But Hawaii's state government order demands that the suspension remain in effect until independent evaluators can ensure that appropriate actions are taken to protect drinking water.

Putting the storage facility out of use could affect operations at a critical time for the Navy, especially as tensions rise in the Pacific with China's rhetoric about Taiwan ramping up over the past year, said Lyle Goldstein, a Pacific Ocean maritime security and director of Asia Engagement at Defense Priorities think tank.

The Hawaii Department of Health on Monday ordered the Navy to suspend operations at the fuel facility, citing the governor's power to act if there is "imminent peril to human health and safety or the environment" caused by a leak or operation of an underground storage tank system.

The order came shortly after Navy officials said they already had suspended fuel complex operations. The state health department set a hearing for Tuesday afternoon, but it was postponed after the Navy informed state officials that it planned to contest the emergency order.

Navy officials on Tuesday did not respond to emails and phone messages seeking comment on why the order was being contested even though use of the fuel complex was already suspended.

"Hawaii's wellbeing and the safety of our residents, including military families, must come first. We cannot have national security without ensuring public health and safety," Gov. David Ige, a Democrat, said in a statement.

In announcing the shutdown of the complex that supplies fuel to U.S. military ships and planes that patrol the Pacific, Navy Secretary Carlos Del Toro on Monday did not say how long it would last but insisted that the cutoff's impact on military operations would "have a very minimal effect, if any, at all right now."

But Goldstein, of Asia Engagement at Defense Priorities, said losing the option of using the fuel filling complex poses a strategic challenge for the U.S. military's ability to operate effectively.

"Hawaii is really probably the most important US base in the whole Asia Pacific, so undoubtedly this is a big challenge for the Navy," he said. "I can't emphasize enough that the fleet cannot operate without fuel and the amount of fuel consumed is truly enormous. I don't think people realize what it takes to keep a carrier group moving and flying."

Although the Navy uses nuclear-powered aircraft carriers, immense amounts of traditional fuel are required for the aircraft operating from the carriers and for the ships that protect them.The Navy's submarines run on nuclear power and would not be affected, Goldstein said.

Del Toro said he did not "want to get into topics with conversations with regards to how long we can continue to do this for national security reasons, but there's really no minimum operation to our fleet's activities or activities impacting the Air Force or the Army or the Marine Corps for any near term at all."

The Roosevelt administration during World War II ordered the construction of the Red Hill underground facility. Experts have said Japan during its attack of Pearl Harbor could have done much more damage and possibly altered the outcome of the war if it had attacked fuel storage on Hawaii instead of U.S. ships.

Ige was not available to comment Tuesday in more detail on the state's efforts for suspending use of the fuel tank complex because he was participating in events marking the 80th anniversary of the Pearl Harbor attack, said Ige spokesperson Cindy McMillan.

The Navy's water system serves about 93,000 people in and near Pearl Harbor and nearly 1,000 military households have complained about their tap water. Some have said they have suffered physical ailments such as cramps and vomiting recently after drinking it.

Water sample testing last week showed the presence of petroleum in water that comes from a well near the underground fuel tank complex that has been the source of multiple fuel leaks over the years.

Del Toro on Monday said officials were getting close to determining the cause of the problem and that when the investigation is completed and reviewed, the Navy will adopt water safety precautions.

He apologized for what he called a "horrible, horrible tragedy."