U.K.'s May deploys ministers to sell Brexit deal to public 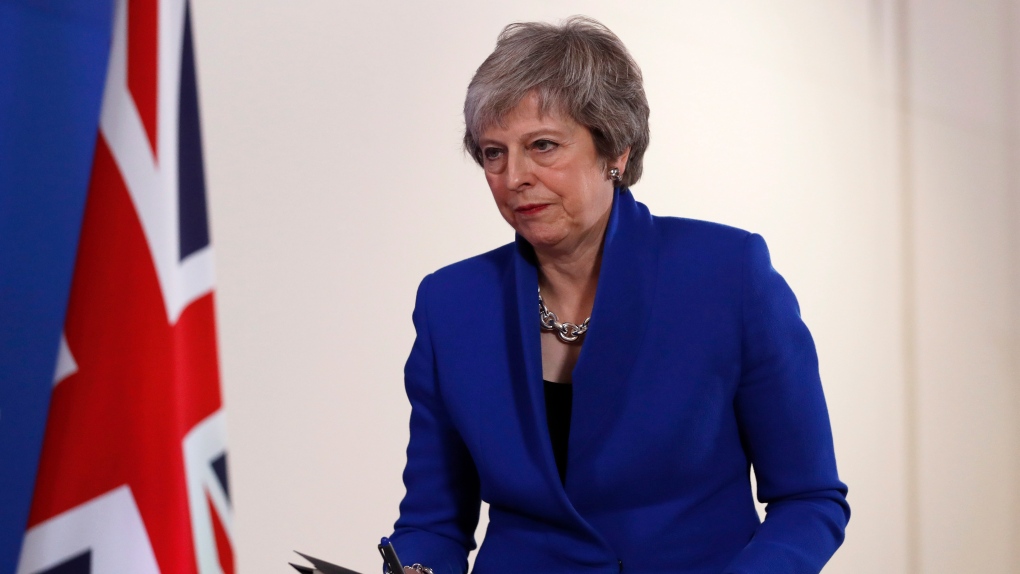 British Prime Minister Theresa May leaves after a media conference in Brussels, Sunday, Nov. 25, 2018. European Union gathered on Sunday to seal an agreement on Britain's departure from the bloc next year, the first time a member country will have left the 28-nation bloc. (AP Photo/Alastair Grant)

LONDON -- British Prime Minister Theresa May sent 30 members of her government around the country Friday to rally popular support to pressure lawmakers to approve her Brexit agreement on leaving the European Union.

The Brexit deal is proving a tough sell, and May is coming under increasing pressure to delay a parliamentary vote scheduled for next week in hopes of wringing concessions out of the EU. With three days of British lawmakers' five-day debate on the deal over, an analysis by Britain's Press Association showed that just 27 of the 163 lawmakers who have spoken out indicated they would back the deal, compared with 122 who say they will vote against it. That latter number includes 29 members of May's own Conservative Party.

The proposal has sparked opposition from all sides because the U.K. would be unable to leave the backstop without approval from the EU. Northern Ireland's Democratic Unionist Party, whose 10 lawmakers prop up May's minority government, oppose the measure because it would treat Northern Ireland differently from the rest of the U.K.

Boris Johnson, May's former foreign secretary who is firmly against her Brexit deal, said the backstop "hands the EU the indefinite power to bully and blackmail this country to get whatever it wants" in negotiations over the future relationship between the two sides.

Terms of the deal "resemble the kind of diktat that might be imposed on a nation that has suffered a military defeat..." he wrote in a Facebook post. "The Spanish will make another push for Gibraltar. The Germans will almost certainly want concessions on EU migrants. And the French President Emmanuel Macron has made it clear that he will not let Britain out of jail until we have satisfied his demands for U.K. fish."

The House of Commons is scheduled to vote on the plan Tuesday. May's government has so far rejected calls to postpone the vote.

Instead, she has sent her most senior advisers, including Treasury chief Philip Hammond and Health Secretary Matt Hancock, to schools, hospitals and small businesses around the country to take her case to the British people.

May says most people "want us to get on with it," and that it's important for ministers speak with communities to explain how her Brexit deal "works for them."

The prime minister argues that the agreement she spent the last 2 1/2 years negotiating is the best one Britain is going to get and the alternative is crashing out of the EU without a deal, which could have devastating effects on the economy. EU officials have warned that May's Brexit deal is the only one on offer.

Alan Wager of the non-partisan research group UK in a Changing Europe said it is not so important whether May loses --but by how much. He argued that May must convince many of her own party's lawmakers to take her side in order to make it plausible to go back to the EU and have another try.

"The scale of the defeat in Parliament is the most important thing here, not whether there's a defeat or not," he said. "She would need to lose by less than 50 MPs (lawmakers) to keep in office probably."

Planning for a no-deal Brexit is continuing apace, however, both by the government and by British firms. A key desire is to make sure that crucial imports get into the country after March 29, when Britain is scheduled to leave the EU, even if there is some chaos at the ports.

Hancock said the government was buying refrigeration units to stockpile drugs. Planes could be used to fly in medicines, bypassing gridlocked ports.

"If there is serious disruption at the border we will have prioritization, and prioritization will include medicines and medical devices," he told the BBC.