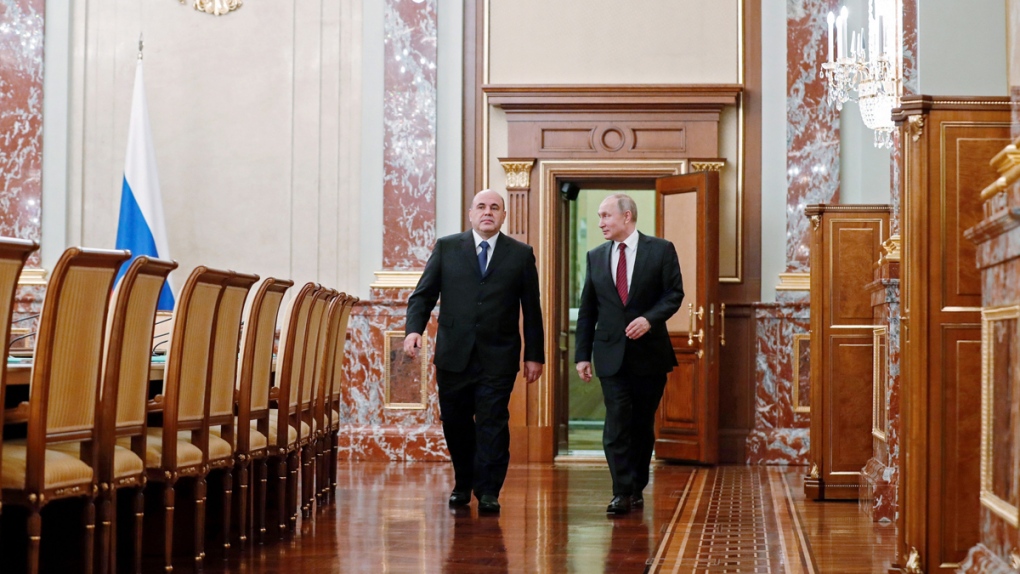 MOSCOW -- Russian President Vladimir Putin formed his new Cabinet Tuesday, replacing many of its members but keeping his foreign, defence and finance ministers in place.

The Cabinet shake-up comes as Putin has launched a sweeping constitutional reform that is widely seen as an attempt to secure his grip on power well after his current term ends in 2024.

Immediately after announcing the proposed changes last week, Putin fired Prime Minister Dmitry Medvedev, who had the job for eight years, and named tax chief Mikhail Mishustin to succeed him.

On Tuesday, Putin issued a decree outlining the structure of the new Cabinet and named its members. He appointed his economic adviser Andrei Belousov as first deputy prime minister and named eight deputy prime ministers, including some new names, such as Dmitry Chernyshenko who was the head of the organizing committee for the 2014 Sochi Olympics.

Foreign Minister Sergey Lavrov, Defence Minister Sergei Shoigu and Finance Minister Anton Siluanov have retained their jobs. Siluanov, however, was stripped of his additional role of first deputy prime minister, which he had in the old Cabinet.

Medvedev's longtime associate, Alexander Konovalov, lost the job of justice minister, and Konstantin Chuikchenko, who was chief of staff in the old Cabinet, was moved to succeed him.

Kolobkov was replaced with Oleg Matytsin, who served as president of the International University Sports Federation, a body which often works closely with Olympic sports bodies. His connections could be important as Russia appeals against a ban on its name and flag at events like the Olympics over doping-related issues.

Along with the Cabinet members, Putin also dismissed Prosecutor General Yuri Chaika and replaced him with Igor Krasnov.

Putin met with members of the new Cabinet on Tuesday, hailing it as "well-balanced."

"The most important tasks are to increase the well-being of our people and to strengthen our state and its global standing," he said.

Putin, 67, has been in power for more than 20 years, longer than any other Russian or Soviet leader since Josef Stalin, who led from 1924 until his death in 1953.

Under the current constitution, Putin must step down as president when his current term ends in 2024, and the set of constitutional changes he proposed last week are widely seen as part of his efforts to continue calling the shots.

Putin's proposes that parliament will have a broader say over Cabinet appointments, but maintain and even strengthen the powers of the presidency.

Putin also suggested that the constitution must specify the authority of the State Council, an advisory body that consists of regional governors and top federal officials. The Kremlin's constitutional bill submitted to parliament empowers the council to "determine the main directions of home and foreign policy," its specific authority yet to be spelled out in a separate law.

It remains unclear what position Putin may take to continue calling the shots, but observers say that the proposed changes could allow him to stay in charge by shifting into the position of the State Council's head.

The lower house quickly scheduled the first of three required readings of the constitutional bill for Thursday.

Putin said that the constitutional changes need to be approved by the entire nation, but it wasn't immediately clear how such a vote would be organized.

Russia's leading opposition politician, Alexei Navalny, and other Kremlin foes have denounced Putin's move as an attempt to secure his rule for life, but the proposals didn't immediately trigger any major protest. The public response was muted by the vagueness of Putin's constitutional changes, and the dismissal of the unpopular Medvedev also helped divert attention from the suggested amendments.

James Ellingworth in Dusseldorf, Germany, contributed to this report