Putin fast-tracks effort to extend his rule in Russia 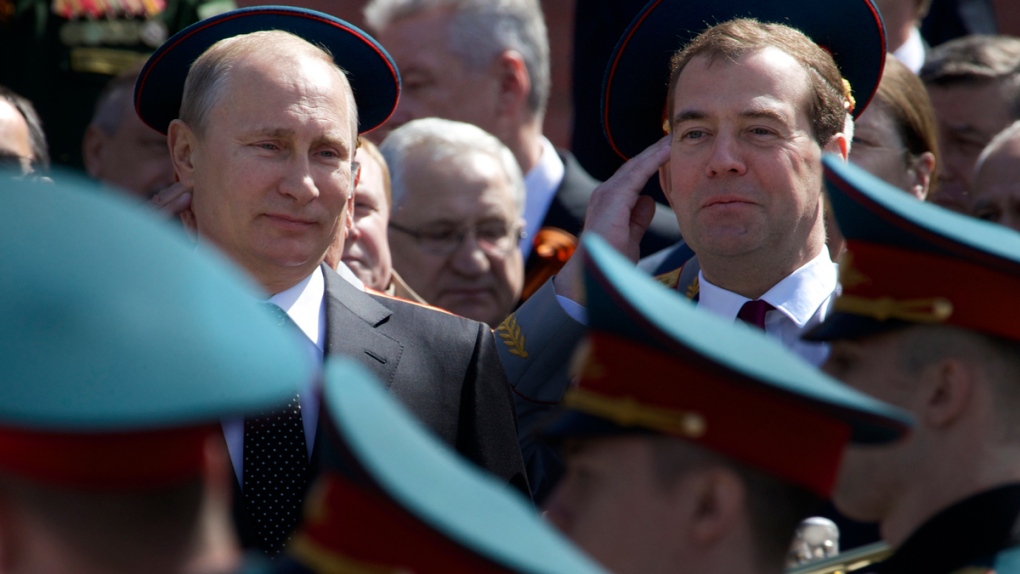 MOSCOW -- President Vladimir Putin on Thursday fast-tracked work on constitutional changes that could keep him in power well past the end of his term in 2024 while lawmakers quickly sealed his choice for new prime minister.

Speaking to a working group created to draft constitutional changes, Putin cast his proposals as a way to strengthen parliament and to bolster democracy. Kremlin critics described the proposed changes as an attempt by Putin to secure his rule for life.

The Russian leader proposed the sweeping amendments to the country's constitution in Wednesday's state of the nation address. Hours later, he fired Prime Minister Dmitry Medvedev, who had the job for eight years, and named tax chief Mikhail Mishustin to succeed him.

The reshuffle has shaken Russia's political elites, who were left wildly speculating about Putin's intentions and future Cabinet appointments.

A constitutional reform announced by Putin indicated he was working to carve out a new governing position for himself after his current six-year term ends in 2024, although it remains unclear what specific path he will take to stay in charge.

The former KGB operative has been in power for more than 20 years, longer than any other Russian or Soviet leader since Josef Stalin, who led from 1924 until his death in 1953. Under the law now in force, Putin must step down when his current term ends.

Putin suggested amending the constitution to allow lawmakers to name prime ministers and Cabinet members. The president currently holds the authority to make those appointments.

Speaking to the group that will draft the amendments, Putin emphasized that the changes are intended to "strengthen the role of civil society, political parties and regions in making key decisions about the development of our state."

"The role of parliament will grow, and the interaction between parliament and the Cabinet will strengthen," he said.

At the same time, Putin argued that Russia would not remain stable if it were governed under a parliamentary system. The president should retain the right to dismiss the prime minister and Cabinet ministers, to name top defence and security officials, and to be in charge of the military and law enforcement agencies, he said.

In his address, Putin said the constitution must also specify the authority of the State Council, a body that consists of regional governors and top federal officials.

Observers speculated that Putin might try to stay in charge by shifting into the prime minister's seat again after increasing the powers of parliament and the Cabinet and curtailing presidential authority.

Others suggested that he could continue pulling the strings as head of the State Council, similar to what the longtime ruler of Kazakhstan did last year. Nursultan Nazarbayev resigned as president and had a protege elected to the post, but the 79-year-old retained his grip on power by securing a prominent position as head of the nation's security council.

Another potential option is a merger with neighbouring Belarus that would create a new position of the head of a new unified state. That prospect has been rejected by Belarusian President Alexander Lukashenko, an autocratic ruler who has been in power for more than quarter century, but the Kremlin has kept pushing him to accept stronger integration.

Few observers expect Putin to follow the example of Chinese leader Xi Jinping, who in 2017 had term limits abolished, which would effectively keep him in power for life. Putin, a law faculty graduate, appears to favour more intricate ways of staying in charge that have a democratic veneer.

Among other amendments suggested by Putin is a proposal to give the constitution a clear priority over international law -- a tweak seen as a reflection of the Kremlin's irritation over the European Court of Human Rights' rulings that held Russia responsible for human rights violations.

Putin charged Thursday that the Strasbourg-based court had made some "unlawful" decisions, calling the situation when Russia is obliged to unconditionally follow its verdicts "unacceptable."

Putin said that the constitutional changes need to be approved by the entire nation, but it wasn't immediately clear how such a popular vote would be organized.

Upper house speaker Valentina Matviyenko said that lawmakers will work on amending the constitution and complete it in the spring.

Observers say that Putin's move to modify the constitution four years before the end of his term may reflect the Kremlin's concerns that his popularity may suffer amid an anemic economy and stagnant living standards. Parliamentary elections are scheduled for 2021, but some speculated that an early vote could be held.

Putin has kept his longtime ally Medvedev in his close circle, appointing him to the newly created post of deputy head of the presidential Security Council. Medvedev's popularity has suffered in recent years amid Russia's economic troubles. Mishustin also joined the council on Thursday.

Medvedev served as president from 2008 to 2012, keeping the seat warm for Putin who continued calling the shots as prime minister when he was forced to step down from the top job due to term limits. Under Medvedev, the constitution was amended to extend the presidential term from four years to six, although it limits the leader to two consecutive terms.

The 53-year-old Mishustin is a career bureaucrat who has worked as the tax chief for the past 10 years, keeping a low profile and showing no political ambitions. He has won a good reputation among experts who praised him for boosting tax collection and streamlining Russia's rigid tax administration system.

"The president wants the Cabinet to spearhead economic growth and help create new jobs," he said. Raising real incomes is a priority for the government."