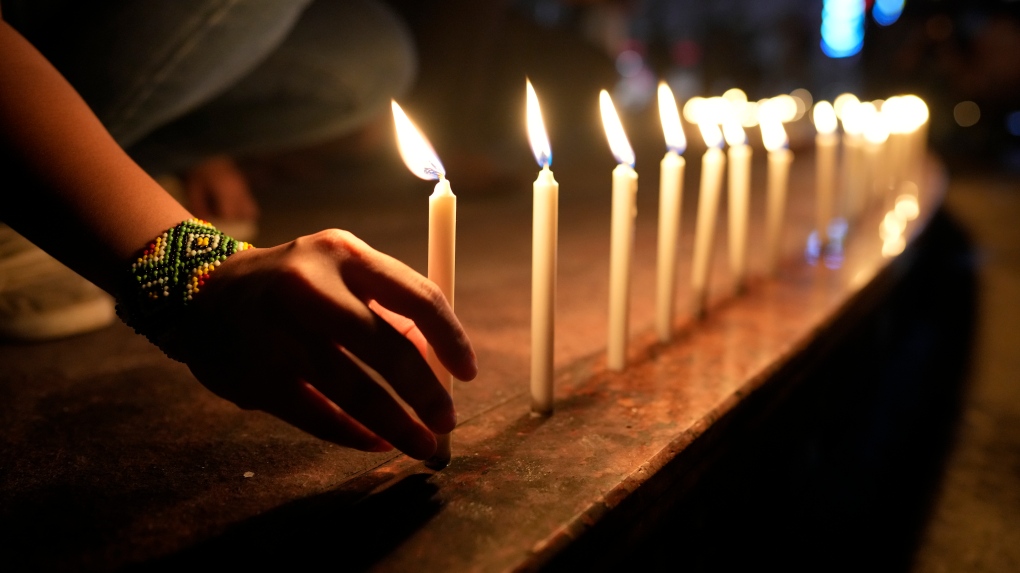 Activists light candles as they condemn the killing of Filipino journalist Percival Mabasa during a rally in Quezon city, Philippines on Tuesday Oct. 4, 2022. Motorcycle-riding gunmen killed a longtime radio commentator in metropolitan Manila in the latest attack on a member of the media in the Philippines, considered one of the world's most dangerous countries for journalists. (AP Photo/Aaron Favila)
MANILA, Philippines -

Motorcycle-riding gunmen killed a longtime radio commentator in metropolitan Manila in the latest attack on a member of the media in the Philippines, considered one of the world's most dangerous countries for journalists.

Police said Percival Mabasa, 63, was driving his vehicle Monday night when two men on a motorcycle approached and shot him twice in the head in suburban Las Pinas City.

The attackers escaped and an investigation is underway to identify and locate them, police officials said. They said investigators are trying to determine the motive for the attack.

Mabasa, who used the broadcast name Percy Lapid, was critical of former President Rodrigo Duterte, who oversaw a deadly crackdown on illegal drugs, and his successor, Ferdinand Marcos Jr., the son of a dictator who was ousted in a 1986 pro-democracy uprising.

"That the incident took place in Metro Manila indicates how brazen the perpetrators were and how authorities have failed to protect journalists as well as ordinary citizens from harm," the National Union of Journalists of the Philippines said in a statement.

Amnesty International said the attack "bears all the hallmarks of an extrajudicial execution and an attempt to silence voices critical of the government."

The victim's family condemned the "brutal and brazen killing" and demanded that the perpetrators to be brought to justice.

Mabasa is the second journalist killed under Marcos Jr., who took office in June. Radio broadcaster Rey Blanco was stabbed to death during an altercation last month in central Negros Oriental province. The suspect immediately surrendered to police.

Nearly 200 journalists have been killed in the Philippines since 1986, when Marcos Sr. was overthrown, according to the journalists' union. The group led a protest Tuesday night and called on the government to do more to stop the killing of journalists.

In 2009, members of a powerful political clan and their men killed 58 people, including 32 media workers, in an execution-style attack in southern Maguindanao province that horrified the world.

The mass killing, linked to a political rivalry, demonstrated the dangers journalists face in the Philippines, which has many unlicensed guns, private armies controlled by powerful clans and weak law enforcement, especially in rural regions.

Russia freed WNBA star Brittney Griner on Thursday in a dramatic high-level prisoner exchange, with the U.S. releasing notorious Russian arms dealer Viktor Bout, American and Russian officials said. The swap, at a time of heightened tensions over Ukraine, achieved a top goal for U.S. President Joe Biden, but carried a heavy price -- and left behind an American jailed for nearly four years in Russia.