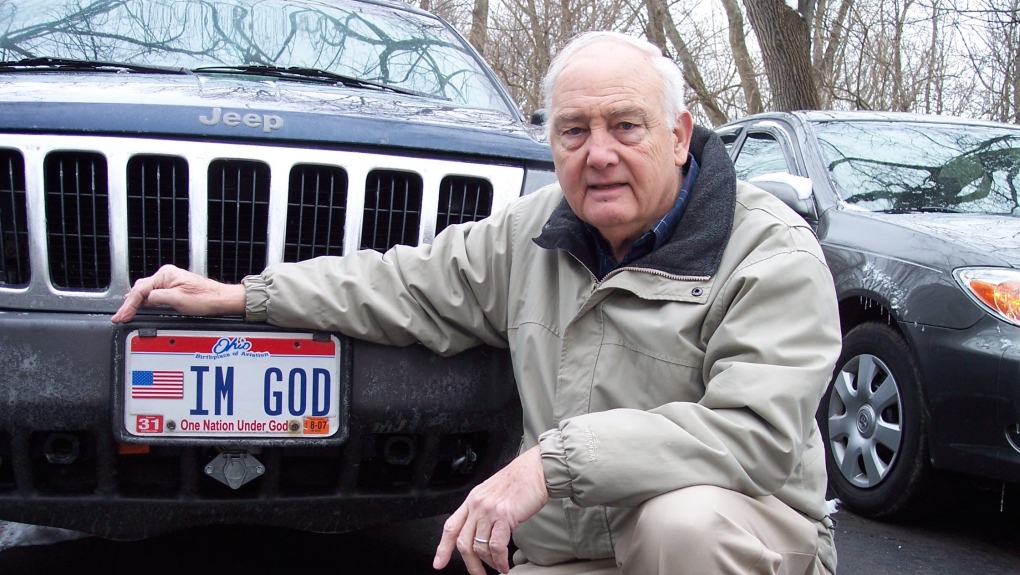 Kentucky officials have been ordered by a federal judge to pay US$150,000, after losing a lawsuit against a man with 'IM GOD' licence plates. (Freedom From Religion Foundation)

TORONTO -- One man in the “Bluegrass State” is likely feeling heavenly today.

Kentucky Transportation officials have been ordered by a federal judge to pay US$150,715, after losing a lawsuit against a man who was initially denied ‘IM GOD’ licence plates. The money will go towards paying the man’s legal fees.

The outcome is likely a godsend to Ben Hart, who’s been waiting for the verdict for years.

In 2016, he applied for the vehicle plates but was denied because they didn’t “meet the requirements” for obtaining personalized plates, according to court documents obtained by CTVNews.ca. Hart, a retired postal worker, grew up religious but now identifies as an atheist, his lawyers said.

When he was denied the “IM GOD” plates, his lawyers argued the state’s existing law was unconstitutional. And according to other court documents, the team also claimed similar plates had been approved, such as "GODLVS," "TRYGOD," "1GOD" and "NOGOD."

According to Kentucky law, the state allows people to have personalized, vanity licence plates as long as they’re not discriminatory on the basis of sex, race, religion or nationality.

On Monday, the judge ruled that Kentucky transportation officials had to pay Hart’s legal fees.

Lawyers for the state had fought the costs, which they called excessive.

They also argued that Hart’s team hadn’t proven that the Kentucky statute was unconstitutional, but that Hart had simply proven he was allowed to get the plates.

The money will go towards Hart’s lawyers, including some from the American Civil Liberties Union of Kentucky and the Freedom From Religion Foundation.

In a joint statement from both groups in November, they said: "The Commonwealth does not allow drivers to say anything they want with a license plate message. That’s fine, but the First Amendment also imposes limits on the Commonwealth. And in this case, as explained below, the Commonwealth went too far."