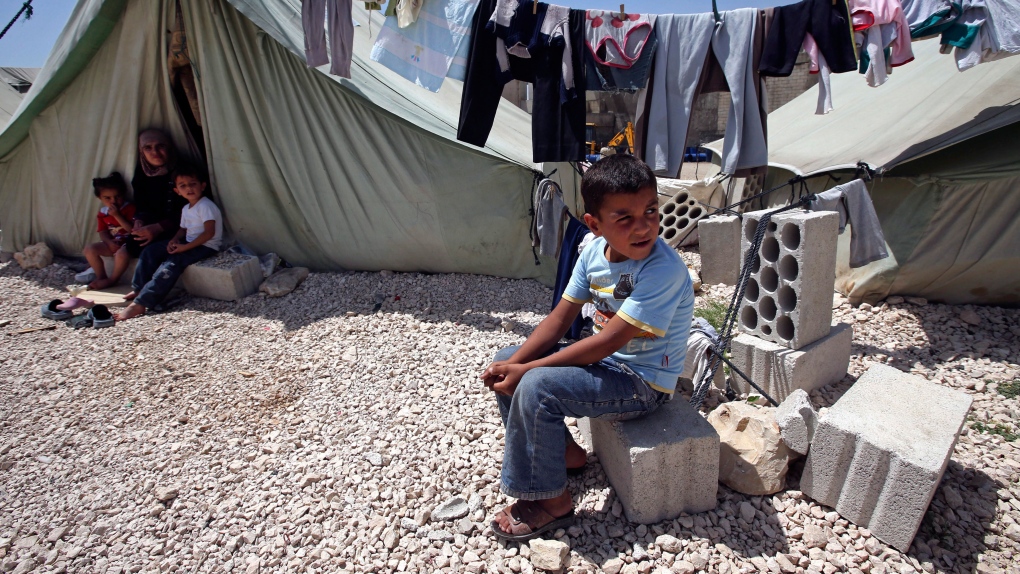 A Syrian refugee boy, right, sits outside his tent next to his family at a temporary refugee camp in the eastern Lebanese town of Marj near the border with Syria, Lebanon, Monday, May 20, 2013. (AP / Hussein Malla)

A four-year-old Canadian orphan, the sole survivor of a family that joined ISIS, is trapped in a Syrian refugee camp and her uncle is desperate to bring her home despite little help from the federal government.

The little girl named Amira was sent to the Al-Hawl refugee camp in eastern Syria earlier this year after her parents and three siblings were killed in an airstrike. The parents had travelled from Canada to Syria to become ISIS fighters.

“She was found on the side of the road by herself,” her uncle, who did not want to be named out of fear for his family’s safety, told CTV News’ Paul Workman from Toronto. “In her own words, she said she saw everybody lying down. She was just wandering by herself. Somebody found her and brought her to the camp.”

Amira’s uncle has been trying to bring her to Canada since he was sent a heartbreaking image of his niece. The picture shows a smiling little girl in a yellow shirt sitting next to a backpack. She appears to have some scarring on her forehead.

“I'm terrified for her health and her security,” he said. “She's only four years old. She's just a little girl.”

“She doesn't even know that we even exist. She thinks her whole family is gone. She doesn’t even know that she has aunts and uncles and grandparents and cousins who love her (and) who are waiting to see her.”

Al-Hawl is a sprawling refugee camp providing shelter to some 40,000 people, including the families of fallen ISIS fighters. In the past few months, reports out of Al-Hawl suggest the camp is becoming more and more overcrowded, while supplies are running dry.

“She’s alone,” Amira’s uncle said. “She doesn’t have anyone there to look out for her best interests. It’s tough conditions over there and everybody’s going to be looking out for themselves.”

The camp is also becoming increasingly dangerous for those housed there. Some of the women have reported assaults at the hands of the Kurdish guards, while one woman was allegedly strip-searched.

CTV News has previously reported the stories of two so-called “ISIS brides” from Canada – Aimee from Alberta and Kimberly from British Columbia -- who are desperate to return to Canada from Al-Hawl, but haven’t had success.

Much like these two ISIS brides, Amira’s uncle said he has run into numerous road blocks in trying to bring Amira home. She was born in Syria, meaning the family needs a DNA test to prove her parents are Canadian and Amira would also need temporary documentation to travel.

Amira’s uncle has been told the DNA test alone could take six months, while the documents provide a whole set of logistical issues.

“I'll do whatever it takes to get her out of her condition,” he said. “I've offered to go myself to the camp (and) pick her up.”

Global Affairs Canada has previously said it cannot offer much in the way of consular services to the Canadians detained at Al-Hawl, in part due to the danger presented in the area, but earlier this month French and Dutch officials arranged for the return of dozens of orphans from the camp.

“I’m just confused why so many countries…can bring their orphans back, but my government is leaving my niece alone,” Amira’s uncle said.

CTV News reached out to the Canadian foreign affairs minister about Amira’s case, but her office referred questions to the immigration minister.

In recent months, Swedish, German and American officials have also arranged for some of those detained at the camp to return home.

In a statement to CTV News about Amira's case on Tuesday, a Global Affairs spokesperson said they are aware of "these troubling reports" and are working to obtain more information from people on the ground.

"Given the security situation on the ground, the government of Canada’s ability to provide consular assistance in any part of Syria is extremely limited," the statement continued.