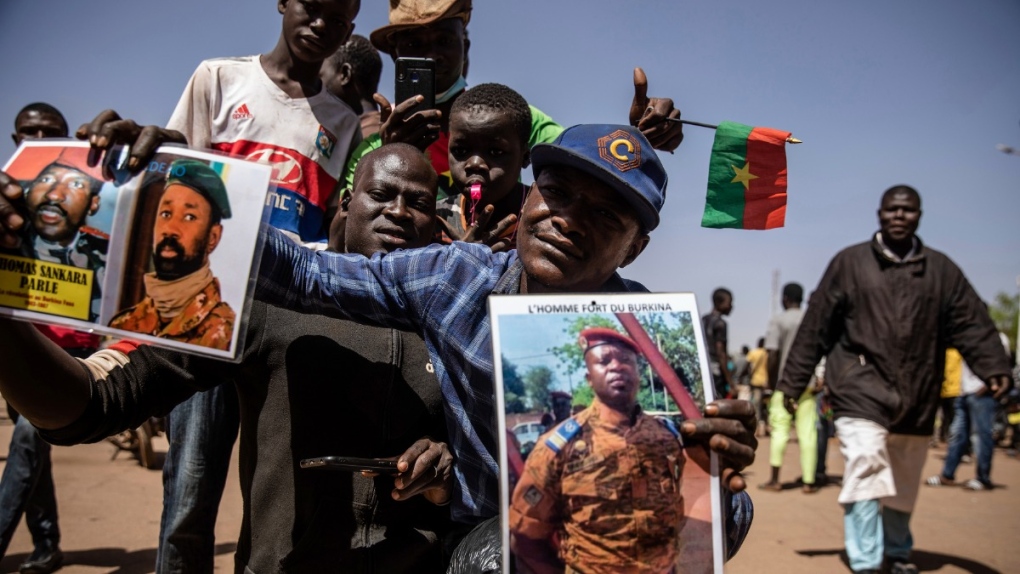 A man holds a portait of Lt. Col. Paul Henri Sandaogo Damiba who has taken the reins of the country in Ouagadougou, on Jan. 25, 2022. (Sophie Garcia / AP)
OUAGADOUGOU, Burkina Faso -

Hundreds of people marched through the streets of Burkina Faso's capital Tuesday in a show of support for the new military-led junta that ousted democratically elected President Roch Marc Christian Kabore and seized control of the country.

Days of gunfire and uncertainty in Ouagadougou ended Monday evening when more than a dozen soldiers on state media declared that the country is being run by their new organization, the Patriotic Movement for Safeguarding and Restoration.

"Today's events mark a new era for Burkina Faso. They are an opportunity for all the people of Burkina Faso to heal their wounds, to rebuild their cohesion and to celebrate what has always made us who we are: integrity," said Capt. Sisdore Kaber Ouedraogo.

On Tuesday, Ouagadougou was packed with people cheering, singing and dancing and there were reports of celebrations in other parts of the country. The coup came after several demonstrations were held against the Kabore government which was criticized for its ineffective response to Islamic extremist violence.

"I'm happy to be here this morning to support the junta in power. We wish that terrorism be eradicated in the months or the years to come," said Salif Kientga who was at the rally in the capital.

Some supporters waved Malian and Burkina Faso flags and held up photos of Mali's junta ruler, Col. Assimi Goita, beside Burkina Faso's new leader, Lt. Col. Paul Henri Sandaogo Damiba, saying that military rule was the only way to pull both countries out of crisis. Others chanted "Down with ECOWAS," the West African regional bloc that recently sanctioned Mali for delaying elections and which has also condemned the military takeover in Burkina Faso.

The junta closed the borders, imposed a curfew, suspended the constitution and dissolved the government and parliament and said it would return Burkina Faso to constitutional order, but did not specify when. The soldiers said the overthrown president is safe, but did not reveal where he is being held. A publicly circulated resignation letter signed by Kabore said that he was quitting his office in the best interest of the country.

The coup comes after months of growing frustration at the Kabore government's inability to stem a jihadist insurgency that's wracked the country, killing thousands and displacing 1.5 million people. However, it's unclear what might change under the new junta, as the ill-equipped military has struggled to battle the jihadists linked to al-Qaida and the Islamic State group.

"A simple change in leadership is unlikely to turn the tide," said Constantin Gouvy, a Burkina Faso researcher who works for the Netherlands-based Clingendael Institute. "If they choose to redouble military efforts, the coup leader, Damiba, has gained experience in a key military leadership position as the commander of the country's 3rd military region ... But a change in leadership is likely not enough on its own to reverse the deteriorating trend we've been seeing. Burkinabe forces are generally ill-equipped to fight this war."

While not much is known about the new leaders, they appear young and are said to be mid-ranked officers. The new apparent leader, Lt. Col. Paul Henri Sandaogo Damiba, is a published author in his early 40s and was recently promoted by Kabore.

One mutinous soldier who insisted on anonymity for his security told The Associated Press that younger officers who had experienced war should run the country, rather than older ones who had never used their guns outside of military training, in a nation that had never previously seen fighting. He said the younger men might not have governance experience but they could learn. The junta is now meeting with religious and community leaders as well as the previous government to discuss a way forward, he said.

To some in Burkina Faso, the soldiers' youth is one of the reasons they believe they'll be able to succeed.

"If you look at those who have taken power they seem to be younger and we hope they will bring younger ideas, bring better ideas than we have seen up until now," said Aliou Ouedraogo, a resident of Ouagadougou.

Meanwhile, the international community has condemned the takeover.

The West African regional bloc known as ECOWAS, demanded that the soldiers return to their barracks and urged dialogue with the authorities to resolve the issues. United Nations Secretary-General Antonio Guterres called on coup leaders to put down their arms.

On Tuesday, French President Emmanuel Macron, said he stands by ECOWAS in condemning the coup and that his priority is seeing that Kabore is safe and keeping the situation calm. He said France is monitoring the situation closely. The United Nations High Commissioner for Human Rights, Ravina Shamdasan, said she "deeply deplores" the military takeover and called on the military to immediately release Kabore and other high-level officials who have been detained.

The U.S. State Department said it was deeply concerned by events in Burkina Faso, calling for restraint by all actors, adding that it would be carefully reviewing the events on the ground for any potential impact on assistance.

"We condemn these acts and call on those responsible to deescalate the situation, prevent harm to President Kabore and any other members of his government in detention, and return to civilian-led government and constitutional order," said a statement from department spokesman Ned Price issued late Monday. "We acknowledge the tremendous stress on Burkinabe society and security forces posed by ISIS and JNIM but urge military officers to step back, return to their barracks, and address their concerns through dialogue."

Mattel is honouring Laverne Cox with a Barbie doll in her likeness to celebrate the Emmy-winning actress and trans rights advocate’s 50th birthday.

Meta Platforms Inc's image-sharing platform Instagram was down for thousands of users on Thursday, according to outage-tracking website Downdetector.com.