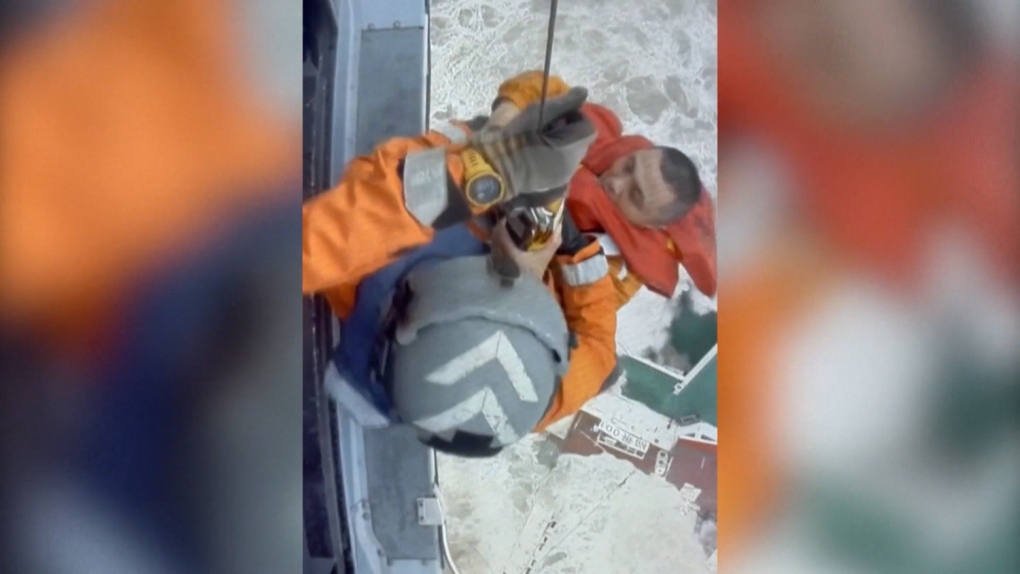 A search for more than two dozen crew members whose ship broke in half and sank after being caught near the centre of Typhoon Chaba was under way on Saturday. (Hong Kong Government Flying Service/AFP/CNN)

A search for more than two dozen crew members whose ship broke in half and sank after being caught near the centre of Typhoon Chaba was under way on Saturday, according to the Hong Kong search and rescue authorities.

The Honk Kong Government Flying Service (GFS) said the vessel sunk some 300 kilometres, or 185 miles, southwest of the island.

In a post on its Instagram account, the GFS said it received a rescue request at 7:25 a.m. local time on Saturday. It said the vessel's crew abandoned ship after it suffered substantial damage in the South China Sea.

A dramatic video from the rescue operation showed a crew member being pulled up on a rope into a helicopter from the ship as it was sinking.

Three crew members were rescued, but the fate of the remaining 27 people who were on board the ship remains unclear, GFS said, adding that harsh weather conditions were hampering the search and rescue operations.

Four helicopter and two fixed-wing aircraft sorties were deployed to the scene to conduct search and rescue operations, the GFS added.

The storm caused disruptions across the region, with flights canceled and some businesses closed due to strong winds and heavy downpours.

Hong Kong authorities have issued a warning over the typhoon on Thursday, during the highly anticipated visit of Chinese leader Xi Jinping. The grand opening of a new Hong Kong Palace Museum that was meant to coincide with the 25th anniversary of the city's handover from British to Chinese rule was postponed until Sunday because of the storm.

Chaba has made landfall in Guandong Province in China at about 3 p.m. local time (3 a.m. ET).