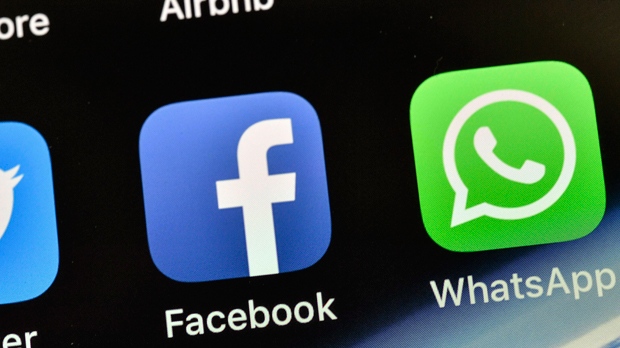 In this Nov. 15, 2018, file photo the icons of Facebook and WhatsApp are pictured on an iPhone in Gelsenkirchen, Germany. (AP Photo/Martin Meissner, File)

The world’s most popular social media sites all experienced technical problems on Wednesday.

Facebook, which has an estimated 2.3 billion monthly users, had problems uploading or sending images, videos and other files over the app.

“We're sorry for the trouble and are working to get things back to normal as quickly as possible,” the social media giant said in a statement on Twitter.

Instagram, which is owned by Facebook, issued the same apology after users also experienced problems uploading or sending images and video.

Twitter was having “issues” too with direct messages and notifications.

“We're working on a fix and will follow up as soon as we have an update for you,” Twitter tweeted Wednesday afternoon.

Facebook and Instagram were “back at 100%” around 8 p.m., about eight hours after the problems were first reported, the company said in statement.

Earlier in the day, hundreds of users of the various apps took to Twitter to vent their frustration and joke about the problems.

“Just tell Putin to put the bots on ‘idle’ for an hour or two,” Samantha Hagan wrote.

“This is horrible. How do you want to start a whole cryptocurrency when you cannot even maintain (a)person’s timeline. This is horrible!,” wrote Lyndon Mack.

One user urged a sense of calm.

We’re aware that some people are having trouble uploading or sending images, videos and other files on our apps. We're sorry for the trouble and are working to get things back to normal as quickly as possible. #facebookdown