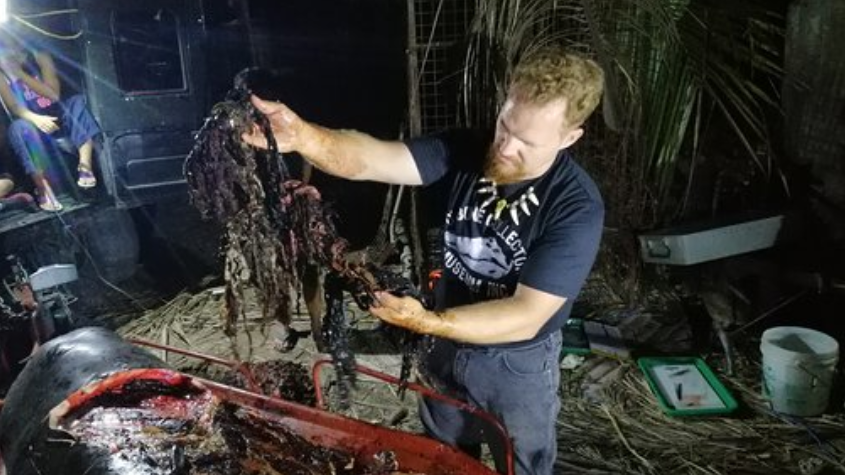 A dead whale swallowed roughly 40 kilograms of garbage including rice sacks and grocery bags, according to a necropsy conducted by a non-profit in in the Philippines. (Darrell Blatchley, Mary Gay Blatchley/ D' Bone Collector Museum)

A dead Cuvier's beaked whale swallowed roughly 40 kilograms of garbage which included grocery bags, rice sacks and banana plantation bags, before it washed up on a Philippine shore.

On Saturday, Philippines’ Bureau of Fisheries and Aquatic Resources reported that a recently deceased, 4.69-metre whale was stuck on the shores of the Mabini Campostela Valley, just 93 kilometres east of Davao City.

Darrell Blatchley, who founded the non-government organization D’ Bone Collector Museum Inc., told CTVNews.ca that his team arrived as soon as they heard of the beached whale.

“I was not prepared for the amount of plastic,” he wrote over Facebook messenger, following a necropsy his team conducted. “It was disgusting and heartbreaking. It was like the plastic was never ending.”

“I couldn't imagine how much this animal had suffered,” he said.

The whale had 16 rice sacks in its stomach and Blatchley said some of the plastic had begun calcifying or hardening. His team believes the whale died from plastic ingestion and starvation.

Cuvier's beaked whales are cetaceans -- aquatic mammals like dolphins or beluga whales -- which don’t drink water from the ocean and instead get their fresh water from the food they eat.

But in this case, Blatchley explained that all the plastic prevented food from reaching its intestines to be absorbed and further broken down by the body.

“[The whale] was showing signs of being emaciated and dehydration. It had been vomiting blood before it died,” he said.

Blatchley was not surprised at how the whale had died. In the past ten years, he said his team has found 61 whales and dolphins -- 57 of which had died from fishing nets, ingesting plastic garbage or as a result of dynamite fishing, which uses explosives.

“This cannot continue,” he lamented. “The Philippines needs to change … or nothing will be left.”

A 2015 report by the Ocean Conservancy charity and the McKinsey Centre for Business and Environment ranked the Philippines as the third-largest source of plastic which ends up in the ocean, just after China and Indonesia.