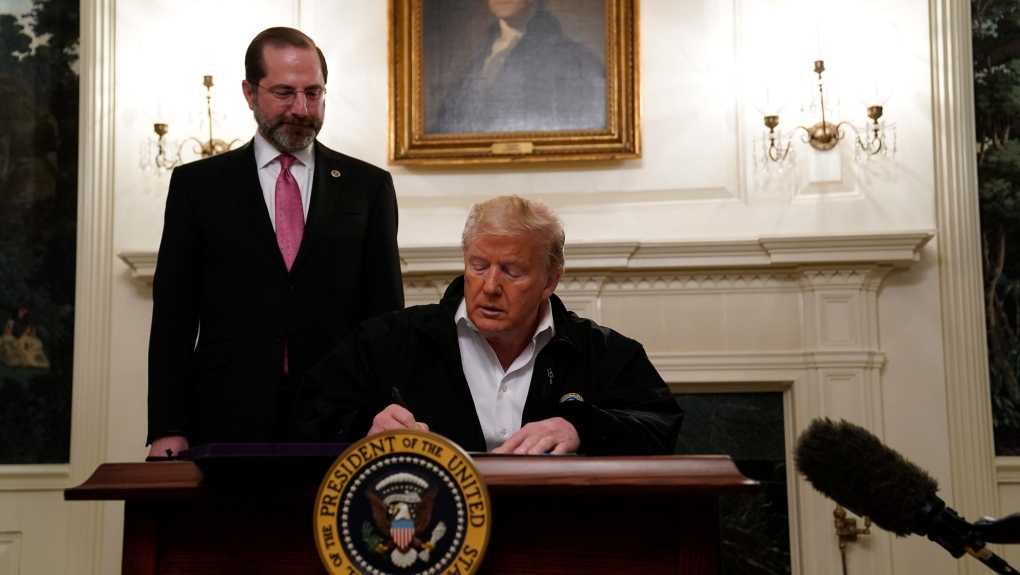 U.S. President Donald Trump signs an $8.3 billion bill to fight the coronavirus outbreak in the U.S., Friday, March 6, 2020 at the White House in Washington, as Department of Health and Human Services Secretary Alex Azar, looks on. (AP Photo/Evan Vucci)

OTTAWA -- Members of the federal government's COVID-19 vaccine task force are casting worried eyes at the Trump administration's political push to get a vaccine approved before the U.S. presidential election in November.

Dr. Joanne Langley, the task force co-chair, and member Alan Bernstein say they are concerned about "vaccine hesitancy" in Canada, the phenomenon where people have doubts about taking a readily available vaccine because of concerns about its safety.

Langley says that when a vaccine against COVID-19 is eventually found, governments and health-care professionals will have to mount a vigorous information campaign to counter opposition.

And it won't help that President Donald Trump has said a pandemic-ending vaccine could be rolled out as soon as October, stoking concern that he is rushing the timeline to further his re-election chances on Nov. 3.

Countering concerns that an apparent hurry to approve a vaccine could spook people out of getting it is an ongoing concern among the approximately one dozen health experts on the government's vaccine advisory panel.

It's tasked with recommending which vaccine candidates the government should be spending money on.

This past week, Trump chided the director of the Centers for Disease Control and Prevention for being "confused" when he testified at a Senate committee that a safe and effective vaccine wouldn't be ready by U.S. election day.

"As a scientist, and as a citizen, that's concerning to me because the regulator is designed to be independent of any political influence," Langley said in an interview. She is an expert in pediatric infectious disease at the Canadian Centre for Vaccinology at Dalhousie University.

"All the decisions are made based on the evidence of science, which includes the immune response, how well it protects, all of the adverse events," she added. "And really, politicians have nothing to do with that."

Bernstein said if politicians successfully pushed health regulators to approve a vaccine prematurely, that would violate public trust and discourage the widespread vaccine use needed to end the pandemic.

"I think it would be a big mistake. So I don't see it happening before Nov. 3, no," Bernstein said in an interview. Bernstein is the head of CIFAR, a Canadian-based global research organization.

"What a disaster it would be if we actually got a great vaccine, but in the U.S., the population didn't trust it, because they felt that the decision was being compromised."

In Canada, the federal government has made advance purchase deals with a handful of international biotech companies for tens of millions of vaccine doses if they are found to be safe and effective.

Canadian politicians and public health officials have said that widespread use of a vaccine is key to stamping out the novel coronavirus.

Bernstein said the government's purchasing decisions have been based on recommendations born out of the painstaking research that his advisory group has undertaken. The task force reports to Health Minister Patty Hajdu and Innovation Minister Navdeep Bains.

"They've been very conscientious in terms of listening to us, visiting with us, talking with us. Both ministers," said Bernstein, who was the first president of the Canadian Institutes of Health Research. He serves on medical advisory boards in the U.S., Britain and Australia, and with the Bill and Melinda Gates Foundation.

"Science is driving the decisions."

Langley said there is an onus on governments and health professionals to communicate to Canadians the merits of taking a safe vaccine when a viable candidate is found and approved for use.

"We want to make sure that the Canadian public has a chance to learn about the very high standards that will have to be met for these vaccines," she said, "and that they feel confident that people have chosen these vaccines with a view to their best interest."

Bernstein said Canadians have a high level of trust in the institutions and political leaders.

"I'm not a Liberal or Conservative. I'm not commenting on Prime Minister Trudeau, but just in general, Canadians are pretty trusting, and that trust has been earned."

Langley and her co-chair Mark Lievonen spent half a day briefing the Liberal cabinet during its two-day retreat in Ottawa this past week.

"It was all about the health consequences for Canadians of COVID and what we know so far, and what we might further be able to do and what the future is going to look like," said Langley.

The vaccine task force was formally announced by the government in early August but it has been working since June. Over the summer it met in six-hour Zoom sessions at least twice a week, "interviewing various companies, various scientists, comparing notes with other national task forces to hear what they're up to," said Bernstein.

He and Langley are hopeful at least one viable vaccine candidate will emerge before the end of December from the several ongoing human trials.

They both say it could take several months after that before Health Canada gives the necessary final approval.

"We have to educate the public," said Langley.

"It will be absolutely our responsibility to make sure that the public is informed so that they're confident and can get those vaccines for themselves and their families knowing that the regular high standards that we have in Canada for vaccines are all met."