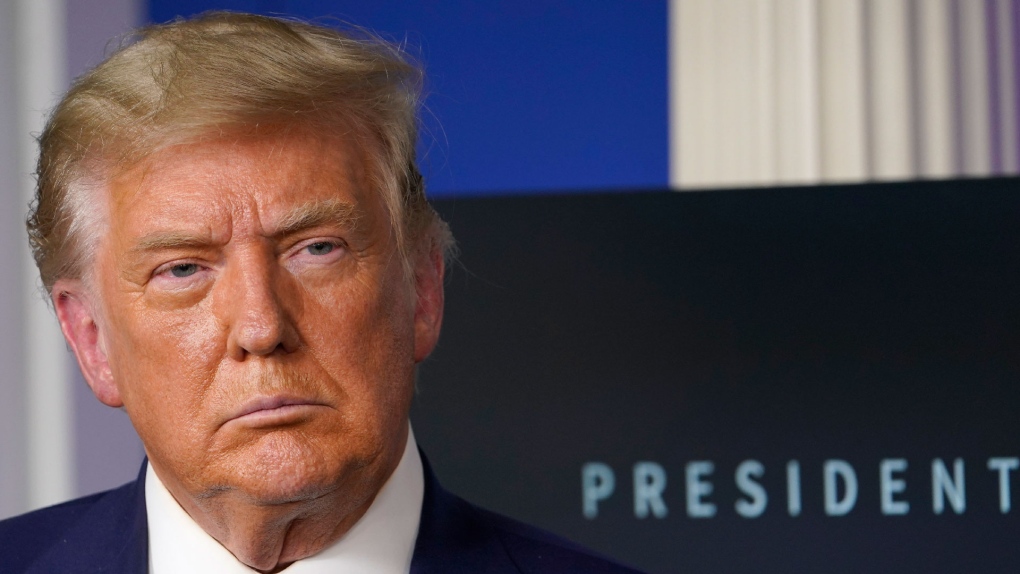 In this Friday, Nov. 20, 2020 file photo, U.S. President Donald Trump listens during an event in the briefing room of the White House in Washington. (AP / Susan Walsh, File)

EDMONTON -- Calls to “Release the Kraken,” once reserved for tales of Scandinavian folklore and rum commercials, have become the latest rallying cry for pro-Trump groups spreading unsubstantiated claims of widespread voter fraud in the U.S. election.

Pro-Trump groups, including QAnon conspiracy theorists, have been sharing the hashtag #ReleaseTheKraken in the weeks following President-elect Joe Biden’s declared victory in an effort to support the legal campaign to challenge the election results.

But how did the Kraken – a gigantic sea monster from Scandinavian folklore that rises up from the ocean to devour its enemies and a famous line from "Clash of the Titans" – become the symbol of this campaign?

The hashtag appears to stem from comments made by Sidney Powell, a lawyer for former U.S. national security adviser Michael Flynn.

During an interview with Fox Business Network on Nov. 13, Powell claimed the president’s team had substantial evidence to prove widespread voter fraud in several key states.

“We are talking about hundreds of thousands of votes. President Trump won this election in a landslide,” she said during the interview.

Powell claimed that she had seen a growing body of evidence and testimony from voters to prove that Dominion voting machines altered ballots in key swing states, claiming the machines were developed to rig elections in countries such as Venezuela, Cuba, and China.

When asked if she believed her claims of voter fraud were the “culmination of an four-year effort to overthrow Trump’s presidency,” she alleged that voter fraud had been organized and conducted with the help of tech companies, social media companies, and the media.

“I’m going to release the Kraken,” she stated.

The hashtag has continued to gain traction on Twitter as pro-Trump supporters spread news of efforts to legally challenge the election results. Though, on Saturday, some of the tweets appeared to poke fun at the effort as users shared images of The Kraken rum bottles, and images of octopuses, which are commonly used to depict the fictional creature.

Or you can just release the other real Kracken. #ReleaseTheKraken pic.twitter.com/wEOnBO7tdy

No evidence has emerged of the widespread voting fraud that Trump and his legal team have repeatedly alleged, which has been slapped down by judges and state election officials.​

The Kraken line first came to the internet’s attention following the release of 2010's “Clash of the Titans” remake. The line, uttered by Zeus, then became a popular meme and one of TIME magazine’s Top 10 Buzzwords of the year.