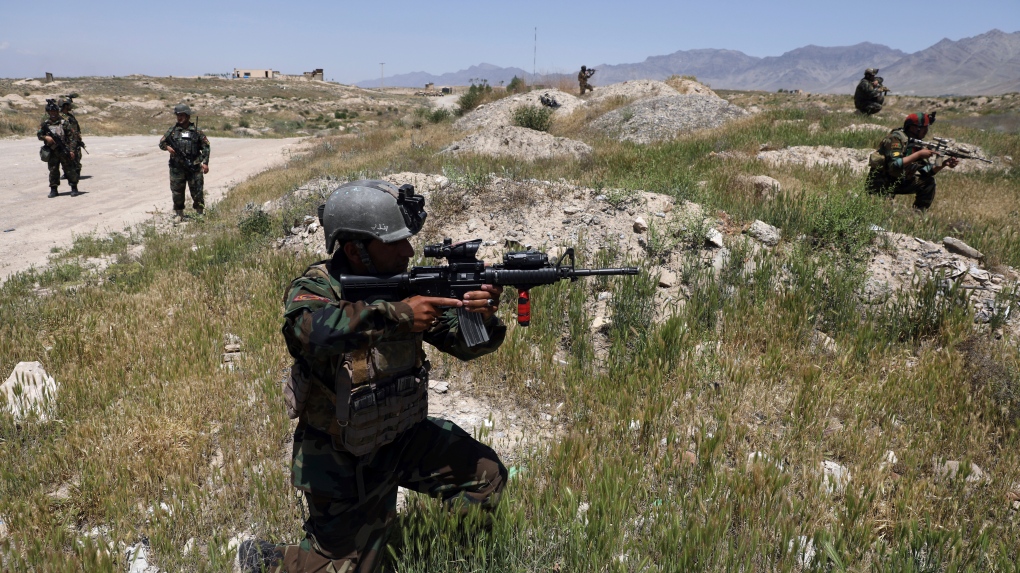 This file photo shows Afghan soldiers patrolling outside their military base on the outskirts of Kabul, Afghanistan, Sunday, May 9, 2021. (AP Photo/Rahmat Gul)

Dozens of Afghan soldiers slipped across the border into northwestern Pakistan, the Pakistani army said Monday. The Afghan troops were fleeing after their border post was overrun, apparently by the Taliban.

The statement said 46 members of the Afghan forces, including five officers, crossed the border late Sunday near the Pakistani border town of Chitral in Khyber Pakhtunkhwa province.

The Afghan soldiers "have been provided food, shelter and necessary medical care as per established military norms," the Pakistani army said, adding that it had informed Afghan authorities of the development.

The Afghan government denied Monday its troops crossed into Pakistan.

"This issue is not true. No Afghan military personnel have taken refuge in Pakistan, the sensitivity that all Afghans have against Pakistan and especially our military, is clear to all," said Gen. Ajmal Omer Shinwari, spokesman for the Afghan National Defense and Security Forces. He made the statement at a press conference in the Afghan capital Kabul.

But early on Tuesday, Pakistan's military distributed a video of Afghan soldiers in uniform being greeted by Pakistani troops. An accompanying statement read: "The said soldiers have now been amicably returned to Afghan authorities on their request along with their weapons and equipment. Pakistan will continue to extend all kinds of support to our Afghan brethren in time of need."

Neither Pakistan nor Afghanistan provided information about fighting on the Afghan side of the border. Pakistan's military dismissed the Afghan denial.

The Taliban have swiftly captured territory in recent weeks in Afghanistan, and seized strategic border crossings with several neighboring countries. They are also threatening a number of provincial capitals -- advances that come as the last U.S. and NATO soldiers complete their final withdrawal from Afghanistan.

The insurgents are said to now control about half of Afghanistan's 419 district centers. The rapid fall of districts and the seemingly disheartened response by Afghan government forces have prompted U.S.-allied warlords to resurrect militias with a violent history.

For many Afghans weary of more than four decades of wars and conflict, fears are rising of another brutal civil war as American and NATO troops leave the country.

Relations between Afghanistan and Pakistan -- long fraught with suspicion and deep mistrust -- deteriorated further when the Taliban overran the Afghan border town of Spin Boldak earlier this month. Taliban fighters at the time were seen receiving medical treatment in a Pakistani hospital in the town of Chaman, across the border from Spin Boldak.

Afghan officials have accused Islamabad of providing sanctuary to the Taliban as Afghan forces battle to retake Spin Boldak. The U.S. last week carried out airstrikes in support of Afghan troops in the southern city of Kandahar, about 100 kilometers (60 miles) west of Spin Boldak.

Also this month, Kabul recalled its ambassador and other diplomats from Islamabad after the 26-year-old daughter of Afghanistan's ambassador was brutally attacked in the Pakistani capital. Pakistan still hosts about 2 million Afghans as refugees from decades of war in their homeland.

The Taliban surge gained speed after President Joe Biden announced in mid-April that the last American and NATO troops would soon leave Afghanistan. The 2,500-3,500 American soldiers and 7,000 NATO allies have mostly left the country at this point, with the few remaining soldiers to be gone by Aug. 31.

Pakistan has dismissed allegations of aiding the Taliban, and points out that it succeeded in pressuring the insurgents into peace talks last year. For its part, Pakistan accuses Afghanistan of harboring the Pakistani Taliban, a militant group separate from the Afghan Taliban that has stepped up attacks on the Pakistani military.