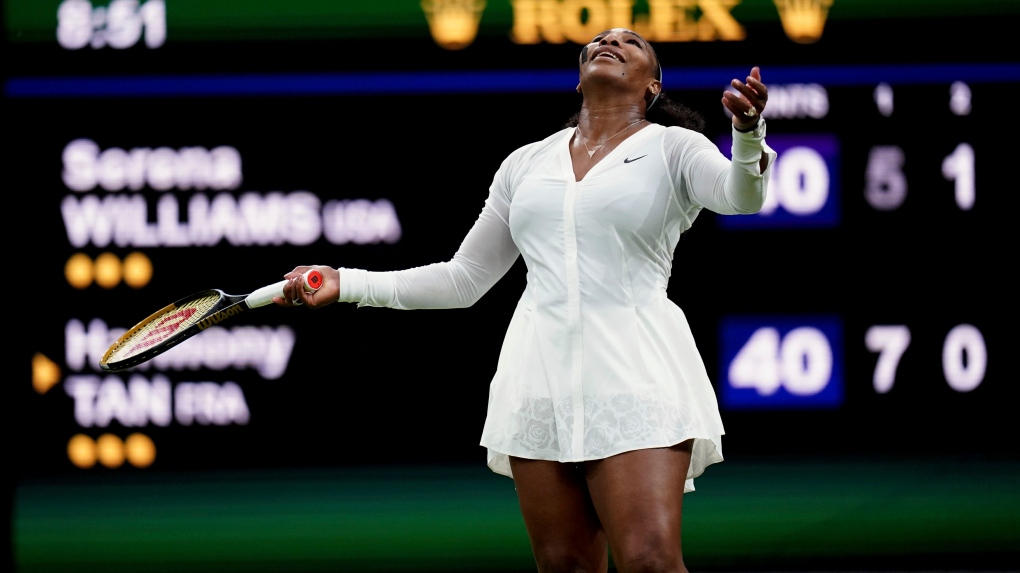 Serena Williams of the U.S. reacts as she plays France's Harmony Tan in a first round women's singles match on day two of the Wimbledon tennis championships in London, Tuesday, June 28, 2022. (John Walton/PA via AP)
WIMBLEDON, England -

Serena Williams began - and ended - her comeback at Wimbledon after 364 days out of singles competition looking very much like someone who hadn't competed in just that long. She missed shots, shook her head, rolled her eyes.

In between, there were moments where Williams played very much like someone whose strokes and will have carried her to 23 Grand Slam titles. She hit blistering serves and strokes, celebrated with arms aloft.

Returning to the site of her last singles match, which she had to stop after less than a set because of an injury on June 29, 2021, and seven of her major championships, the 40-year-old Williams came within two points of victory. But she could not finish the job against an opponent making her Wimbledon debut and bowed out with a 7-5, 1-6, 7-6 (10-7) loss to 115th-ranked Harmony Tan of France.

“For my first Wimbledon, it's: Wow. Just wow,” said Tan, who recalled watching Williams on TV as a youngster.

With her older sister, Venus, jumping out of her guest box seat at Centre Court to celebrate the best of points, Serena Williams was oh-so-close to pulling out a topsy-turvy match that lasted 3 hours, 11 minutes and was contested with the retractable roof shut for the last two sets.

This is one indication of how things were at the get-go: Of the 24-year-old Tan's first 11 points, only one came via a winner she produced. Others came via errors by Williams, either forced or unforced.

While Williams - who wore two pieces of black tape on her right cheek; the reason was not immediately clear - recovered from dropping the opening two games to lead 4-2, she reversed course again and allowed Tan to quickly climb back into that set.

When Tan pulled even at 4-all by striking a down-the-line backhand winner, she celebrated with a yell; that shot was so good that even Williams felt compelled to applaud.

Tan came into the day with a 2-6 career record at all Grand Slam tournaments. Clearly enjoying herself - and the setting, the moment, the way it all was going - she broke to lead 6-5 with the help of a cross-court forehand winner, looked at her guest box, raised a fist and waved her arms to ask for more noise from a crowd that was loudly backing Williams.

Soon enough, a forehand passing winner gave Tan that set. At that point, it seemed reasonable to ask: Could Tan pull off by far the biggest victory of her career? Might Williams exit a major in the first round for only the third time in 80 appearances (the previous two were a loss at the 2012 French Open and that mid-match retirement at Wimbledon last year)?

The latter is what happened, of course, although Williams certainly played spectacularly in the second set. She won a monumental game to lead 2-0, breaking after 30 points and 12 deuces across almost 20 minutes when Tan shanked a forehand into the chair umpire's stand.

In a blink, then, it was 5-0 and sure seemed as if Williams was on her way.

In the third set, Williams was two points from advancing while serving for the match at 5-4 but couldn't get closer.

Tan was a point from victory at 6-5, and Williams erased that with a forehand winner - beginning a seven-point run that not only sent the match to a tiebreaker but put her ahead 4-0 in it.

Yet Tan would not go gently. She grabbed five points in a row for a 5-4 lead in the new final-set tiebreaker format adopted this year by all four tennis majors: first to 10 points, win by two.

At crunch time, when Williams has excelled so often on so many big stages, she faltered. Tan came through.