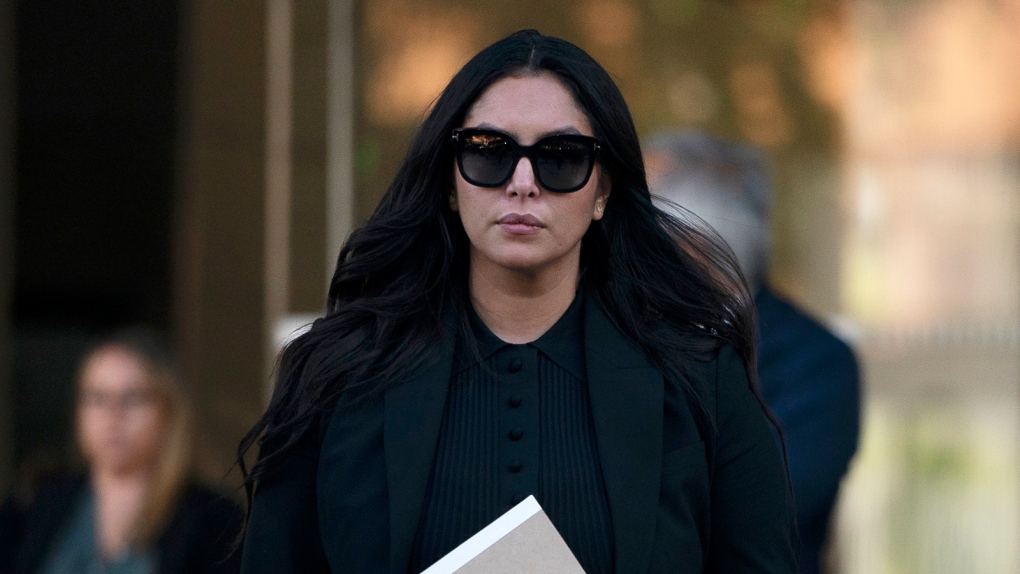 Vanessa Bryant, widow of NBA legend Kobe Bryant, broke down at times Friday as she testified that she experiences panic attacks and anxiety over the possibility of seeing photos from the 2020 helicopter crash that killed her husband, their teenage daughter and seven others.

On the witness stand in her federal lawsuit against Los Angeles County, Vanessa Bryant recalled being at home with her family, breastfeeding her 7-month-old daughter Capri, when she learned of a Los Angeles Times report about county sheriff's deputies sharing the graphic photos.

"I just remember not wanting to react cause the girls were in the room," she testified, her voice rising with emotion. "I said, 'I can't do this.' ... And I bolted out of the house and I ran to the side of the house so the girls couldn't see me. I wanted to run... down the block and just scream. I can't escape my body. I can't escape what I feel."

Along with Chris Chester, whose wife and daughter also died in the crash, Bryant filed a federal civil lawsuit alleging Los Angeles County invaded their privacy and inflicted emotional distress by not properly containing the spread of the photos which, according to witness testimony, show not just helicopter wreckage but the mangled bodies of the victims.

Bryant admitted to being nervous on the stand and cried when talking about her late daughter Gianna. She had to gather herself when describing the day it took to find Gianna's body in the wreckage. She sobbed as she recalled looking at a secure NTSB website to identify clothing and other personal items of the victims.

Bryant recounted her interaction after the crash with Los Angeles County Sheriff Alex Villanueva, who informed her that her husband and daughter had been killed. She broke down at times when recalling the events.

"I'm sorry Mrs. Bryant. Is there anything I can do for you?" Bryant recalled Villanueva asking.

"If you can't bring my babies back, then please secure the area. I'm concerned about paparazzi," she recalled telling him.

The sheriff assured her that he would, but he remained in the room, Bryant said. She urged him to leave and to handle her request immediately.

According to Bryant, Villanueva stepped out and returned, telling her he had secured a temporary flight restriction over the area through the U.S. Federal Aviation Administration.

Bryant testified that she had to remove comments from her Instagram feed after the images were distributed. Her attorney Luis Li displayed a comment sent to her shortly after the LA Times story published.

Defence attorneys, in court filings, have indicated they plan to address Bryant's own Instagram posts, including one from Halloween in which she is dressed as Cruella de Vil, a villain depicted in Disney movies.

"They say there are five stages of grief: Denial, anger, bargaining, depression, and acceptance. Well, I'd like to add one more...revenge. -- Cruella," the caption reads.

Li asked Bryant about the post. She testified that the choice of costume was consistent with other Halloween outfits she has worn, including the Wicked Witch from "The Wizard of Oz" and Darth Vader.

Bryant said she dresses up as the bad characters to allow her girls to be the good ones.

SHERIFF TESTIFIES HE DEVISED A 'BARGAIN' TO ENSURE PHOTOS WERE DELETED

During cross examination, the defence sought to show that Bryant had other sources of stress beyond the photo controversy, including a lawsuit filed against her by her mother. Bryant testified that her mother "thought she was entitled to money."

Defence attorney Mira Hashmall told Bryant that her mother "accused you of fraud... elder abuse, that must have been stressful."

"It was definitely hurtful," Bryant said, adding that she also felt betrayed.

"I'm sure that was stressful," Hashmall asked.

"Yeah, it wasn't easy," Bryant replied, adding that the lawsuit was settled and it didn't cause the kind of lasting fear she has of the crash scene photos surfacing.

"That was a stress at the time, but my mother gave birth to me. She raised me. And like I said, it has been resolved," Bryant said of the lawsuit.

The defence pressed Bryant on whether her goal was for the photos to never be seen -- which the L.A. County claims its actions accomplished.

"I would have wanted someone to recover all the photographs and investigate" who shared what, Bryant said.

The first witness for the defence, Sheriff Villanueva, testified about the need for expediency in handling the leaked photos. He said that opening a formal investigation would invoke union legal rules that could involve attorneys and delays and allow more opportunity for the photos to spread.

"There's one way we're going to get them immediately," Villanueva said, referring to the crash scene, so he devised what he called a "bargain."

The deputies involved in the leak would prove the photos were deleted and get a note about their conduct in a performance log, Villanueva testified.

Attorneys for the plaintiffs sought to show that the handling of the episode limited internal affairs from later conducting an investigation into alleged wrongdoing.

"You can't have the accountability and (also) risk the photos getting out," Villanueva testified. "And we picked the right one."

Bryant had earlier testified that she lives in fear because a formal investigation could not confirm all crash site photos were accounted for and destroyed.

The trial has so far seen testimony by several law enforcement personnel, including a deputy who testified he showed graphic images from the scene while at a bar, another deputy who said he shared photos while playing a video game, a deputy who sent dozens of photos to someone he didn't know, and a fire official who showed the images to other personnel during an awards ceremony cocktail hour.

Chester, who along with Bryant filed the suit, testified on Thursday, saying he lives in fear that the graphic photos taken of his loved ones' bodies may resurface one day.

Chester took the stand after several days of testimony from the law enforcement officials -- some of whom offered apologies, detailed the graphic nature of the photos, and explained why they were taken and shared and why orders were given to delete them.

Bryant has been in the courtroom listening to the testimony of every witness except the coroner. She walked out of the courtroom abruptly as a bartender testified about seeing photos.

Villanueva is expected to be followed on the stand by L.A. County Fire Chief Anthony Marrone.

They were flying to a girls basketball game at Bryant's Mamba Sports Academy in Thousand Oaks when the helicopter went down, leaving no survivors.