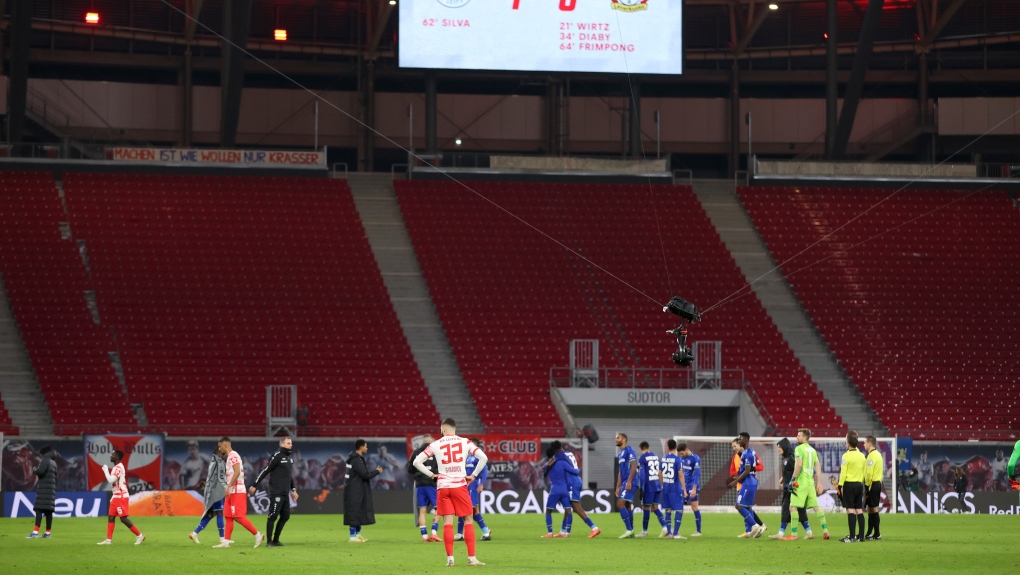 A view of an empty stadium, at the end of the German Bundesliga soccer match between RB Leipzig and Bayer Leverkusen, at the Red Bull Arena in Leipzig, Germany, Sunday, Nov. 28, 2021. (Jan Woitas/dpa via AP)

The German government suggested big crowds at sports events should be reduced Monday after a weekend which featured one empty-stadium Bundesliga game and another with a crowd of 50,000.

Germany leaves policy on sports events during the coronavirus pandemic to the state governments, but there are calls for a more unified approach.

Leipzig had the first top-division game of the season in an empty stadium Sunday, losing 3-1 to Bayer Leverkusen, because its home eastern state of Saxony has Germany's highest infection rates. The day before, Cologne was allowed 50,000 in attendance for its 4-1 win over local rival Borussia Manchengladbach.

Some other states have allowed crowds, but at sharply reduced capacity. Around the country, entry is typically restricted to people with proof of vaccination or proof they recently recovered from a coronavirus infection.

Outgoing Chancellor Angela Merkel's spokesman, Steffen Seibert, said it is “really hard to understand why 50,000 people are coming together in a football stadium, even if it was approved,” at a time when experts are saying that contacts need to be reduced.

“This inequality among the German states in the pandemic as far as large events are concerned -- which doesn't just affect sports, but other big events -- is really unsatisfactory,” Interior Ministry spokesman Steve Alter said. Outgoing Interior Minister Horst Seehofer has been saying for weeks that it should be reduced, Alter added.

The varying approaches are “a sign for (Seehofer) that it would perhaps make sense to react to this at the federal level,” Alter said.

The outgoing government is likely to leave office next week, and Seehofer's party will be going into opposition. The incoming coalition hasn't yet named a successor.

European countries have taken starkly different approaches to allowing crowds at sports events as winter begins and coronavirus cases rise. The English Premier League has played in front of full houses all season so far with no vaccination or testing requirements for fans. The Netherlands moved to empty stadiums for sports events this month.