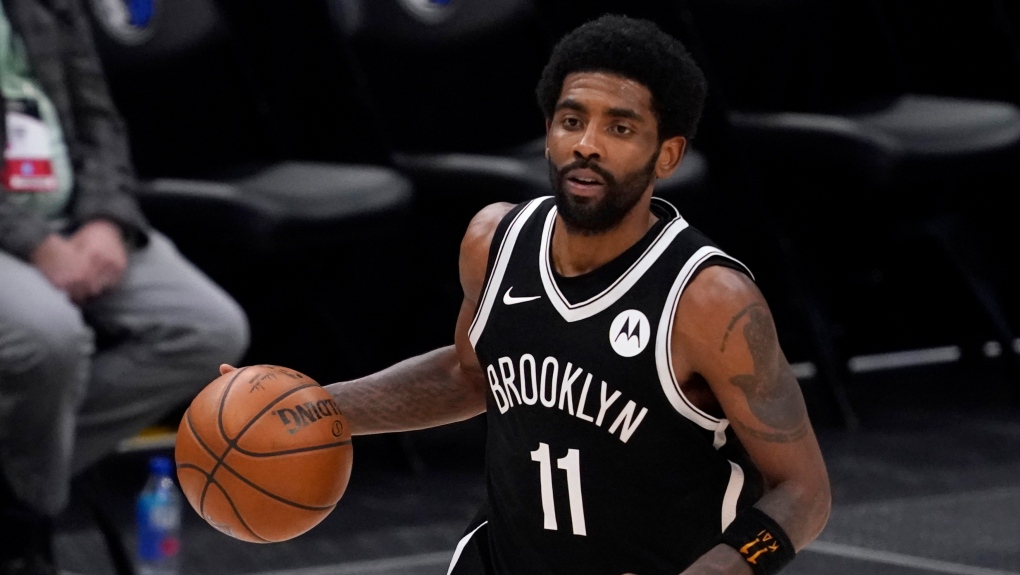 Brooklyn Nets guard Kyrie Irving handles the ball during an NBA basketball game against the Dallas Mavericks in Dallas, in this Thursday, May 6, 2021, file photo. (AP Photo/Tony Gutierrez)
NEW YORK -

A few dozen people were in the plaza outside the arena, some chanting "Let Kyrie play! Let Kyrie play!" and holding signs that said "Stand with Kyrie."

A small group even broke through barriers and got all the way to the front entrance of the arena about an hour before tipoff.

Irving is not with the Nets because of his refusal to get vaccinated against COVID-19. A New York mandate requires professional athletes playing for a team in the city be vaccinated in order to play or practice in public venues.

The Nets could have allowed Irving to play in road games, but they decided he wouldn't be with the team until he could be a full participant. Irving explained during an Instagram Live post that he was doing "what's best for me."

Protester Curtis Orwell said he and others were fighting for "bodily autonomy and sovereignty," and the right to choose what goes in their bodies.

"We also know so much more than we knew 18 months ago about the virus," he said. "We have therapeutics that have been tried and proven to great success. Unfortunately, those kinds of voices are being totally suppressed and censored."

Orwell said he was not vaccinated and knew some people who had lost jobs because they weren't.

"It doesn't feel right to them and that's OK," he said. "We need to respect that."

There were many empty seats in the arena as the game against the Charlotte Hornets was set to begin, though it was unclear if the commotion on the plaza caused it. The plaza was set up with some basketball hoops so fans arriving early could shoot and listen to musical performances.