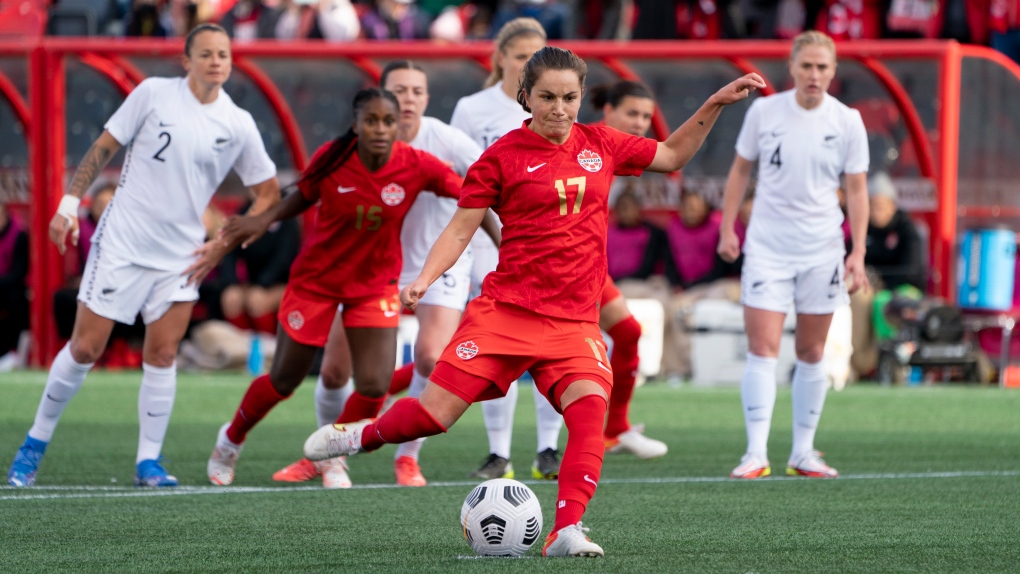 Canada’s Jessie Fleming scores on a penalty shot in the first half during Celebration tour action against New Zealand, in Ottawa, Saturday, Oct. 23, 2021. THE CANADIAN PRESS/Adrian Wyld
OTTAWA -

It had been over 29 months since the Canadian national women's soccer team last played a game on home soil. The Olympic champs made their long-awaited return a victorious one Saturday, kicking off their Celebration Tour in style with a 5-1 win over New Zealand at TD Place.

The friendly was the first for the sixth-ranked Canadian women since beating Sweden in the Tokyo Games final on Aug. 6.

"I think even before the game started it was very special for all the fans that turned up, they made it a memorable night for the group," said Canada head coach Bev Priestman. "I think that spurred the group on and they went and did something special. I think that set the tone for the game.

"To score five goals against a top-25 team, that was important and a step forward for us toward the World Cup."

Jessie Fleming opened the scoring on a penalty kick in the 12th minute and Christine Sinclair made it 2-0 in the 41st minute. Nichelle Prince and Adriana Leon, with a pair, rounded out the Canadian scoring.

"It's great to be back home and some of us were joking that we couldn't remember that last time we played at home," Sinclair said. "To be able to celebrate this gold medal with the fans, it's obviously a special moment and something to celebrate and to see the little kids in the stands, it's pretty special."

Prince scored in the 58th minute. New Zealand's Ria Percival scored from the penalty spot in the 71st minute before Leon tallied in the 75th and again in the 82nd minute.

It was the first game for the national side on home soil since May 18, 2019, when Canada defeated Mexico 3-0 at Toronto's BMO Field in a warmup match ahead of that year's World Cup in France.

The team played 29 straight games outside of Canada before returning to meet the 23rd-ranked Football Ferns.

The tour is to honour the squad for its gold medal at the Tokyo Olympics last summer. The teams will play again Tuesday in Montreal.

Canada and New Zealand have met in the two last two World Cup tournaments. The first meeting, in Edmonton in 2015, was a 0-0 draw. Four years later in Grenoble, Canada earned a 2-0 win.

The 2023 World Cup will be co-hosted by Australia and New Zealand. Canada won its last meeting against New Zealand, a 3-0 decision at a tournament in China in November 2019.

"I think there were a lot of positives that we can take from this game actually," said New Zealand defender Ali Riley. "I know the scoreline is obviously disappointing. But I think the confidence we had playing out of the back, some of the spells of possession, some of the combinations.

"I don't know if that's something we've seen a lot of from the Ferns, especially now playing one of the top teams in the world, the Olympic champions."

The association called on the federation to commit to build a safe environment for athletes and apologize to those who have been "victimized and abused while playing the sport they love."

In addition, the association called on Canada Soccer to initiate a "transparent, independent review," at a mutually agreed time, of the investigation of allegations against Bob Birarda during the time when he was employed by the federation, "to understand fully what occurred and to develop recommendations and best practices to better protect athletes."

The B.C. Prosecution Service said Birarda was facing six counts of sexual exploitation, two counts of sexual assault and one count of child luring. The alleged offences occurred in North Vancouver, Burnaby and West Vancouver between January 1988 and March 25, 2008.

More than a dozen women who played for the Whitecaps and were part of Canada's under-20 talent pool around 2008 have come forward to allege Birarda acted inappropriately with members of the team.

Birarda made a court appearance last December and was released from custody under strict conditions. His case is scheduled to resume on Thursday in a North Vancouver court.

The association also called for the full implementation of the Independent Safe Sport Mechanism, and called on the federal government to protect vulnerable athletes by making it mandatory for all national sport organizations by year's end.

"We know we have a responsibility to use this unbelievable platform," Priestman said. "And so the players, Canada Soccer, we felt it was really powerful to kick off this new era with that and to celebrate some of the great practices that are in place with Safe Sport and Canada Soccer, also to address the past and move forward in this new era."

This report by The Canadian Press was first published Oct. 23, 2021.