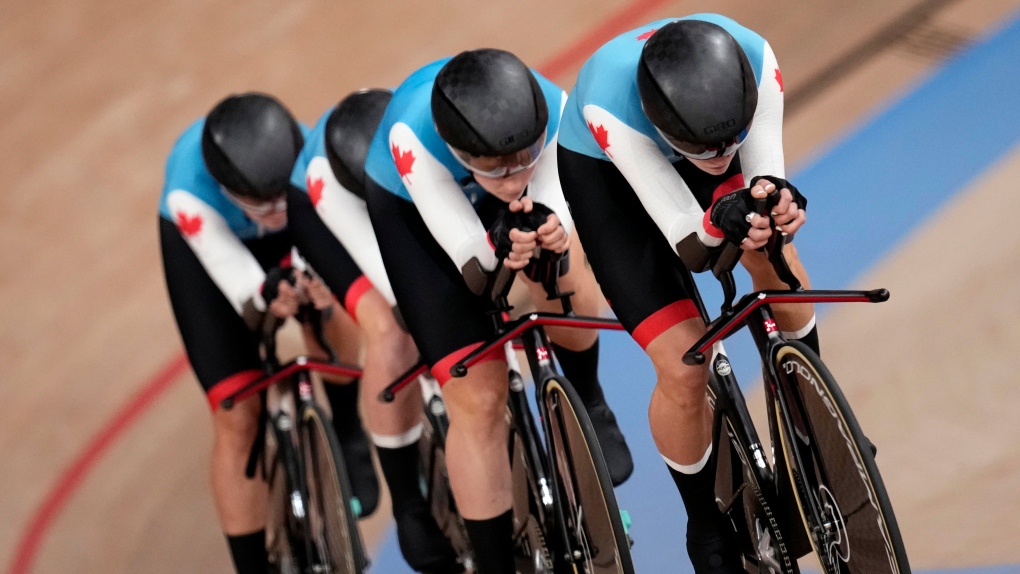 The Canadian women's pursuit track cycling team was denied a third straight Olympic bronze medal after losing to the United States in a showdown for third place on Tuesday at the Tokyo Olympics.

The team of Calgary's Allison Beveridge; Annie Foreman-Mackey of Kingston, Ont.; Ariane Bonhomme of Gatineau, Que.; Vancouver's Georgia Simmerling and Jasmin Duehring of Coquitlam, B.C., finished the bronze-medal race in four minutes 10.552 seconds, just over two and a half seconds behind the Americans.

The United States got out to a strong start, and every time the Canadians cut into the lead star rider Chloe Dygert would move to the front of the American pack to increase the gap between the teams.

Germany handily won its showdown with powerhouse Britain to claim gold in a time of 4:04.242, more than six seconds ahead of the Brits. Germany's time beat the world record it set earlier Tuesday in the heats.

Britain, winners when the event was introduced at the 2012 London Games and again four years later in Rio de Janeiro, had set a world record in its heat, only to see it broken twice by the Germans.

Simmerling, Duehring and Beveridge were part of the group that won bronze in women's team pursuit at the 2016 Rio Games. Duehring also helped Canada finish third in the same event four years earlier in London.

The lineup for Wednesday's men's pursuit medal races was pending after a crash during the fourth heat between Britain and Denmark. Canada won its heat against Germany.