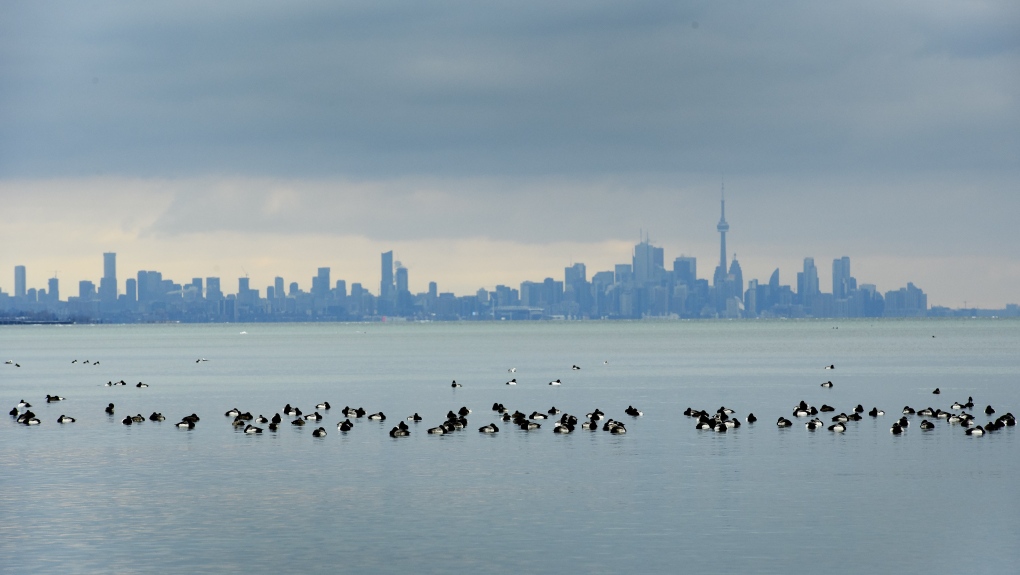 Birds swim in the waters of Lake Ontario overlooking the city of Toronto skyline in Mississauga, Ont., Thursday, Jan. 24, 2019. THE CANADIAN PRESS/Nathan Denette

New research shows that roads and runways quieted by COVID-19 are filling with birdsong instead.

University of Manitoba scientists led a study drawing on millions of sightings by amateur birders across North America that looked at how reduced travel in response to the pandemic has affected birds from hawks to hummingbirds.

"We're focusing on where birds were seen during the pandemic compared to where they were seen in previous years," said lead author Nicola Koper.

"We saw quite strong changes in where birds were seen relative to ... traffic before the pandemic compared with during the pandemic."

To find answers, Koper and her colleagues looked to eBird, an online collaboration managed by Cornell University that brings together and organizes observations by hundreds of thousands of amateur birdwatchers.

The team crunched through 4.3 million individual bird sightings made between March and May from 2017 to 2020 across Canada and the United States. They located those sightings relative to major roadways, airports, and dense urban environments, compensating statistically for how the pandemic may have affected the behaviour of the birders themselves.

They then correlated those sightings with data on COVID-19 restrictions in each county for which they could get information. Koper said that the method ensures any changes were due to pandemic measures.

That's exactly what they found. Of the 82 bird species in the study, 80 per cent of them changed their behaviour in places where the pandemic had altered circumstances.

"Almost all the species we studied did change their location," Koper said.

The observation held even with birds that are most commonly seen in built environments -- robins, for example.

"Even those species that we think of as being well-adapted to human landscapes are much more sensitive to them than we think," said Koper. "These common species have been much more impacted by humans than we recognized."

And some species went both up and down, depending on where you looked. Red-tailed hawks were seen more often along urban-rural margins, but less often near busy roadways.

"Maybe it had to do with less roadkill," Koper suggested.

The lesson from the research is that human-impacted environments -- even asphalt-covered ones -- are not necessarily avian dead zones. Given a little consideration, Koper said birds will live there.

"There's quite a lot of things we can do to reduce traffic," she said.

Public transit would cut cars on the roads. So would working from home. Electric vehicles would at least cut the noise.

"There's habitat out there that isn't being fully utilized by birds," said Koper. "It's suitable except for the presence of traffic."

Previous studies have found that the number of birds in Canada and the U.S. has declined by 29 per cent over the past 50 years. Habitat loss is the biggest reason and anything that would give birds more room to live would help, Koper said.

"Habitat loss is the most significant problem that birds are facing today."

This report by The Canadian Press was first published Sept. 22, 2021.