1,400 dolphins were killed in the Faroe Islands in one day, shocking even some pro-whalers 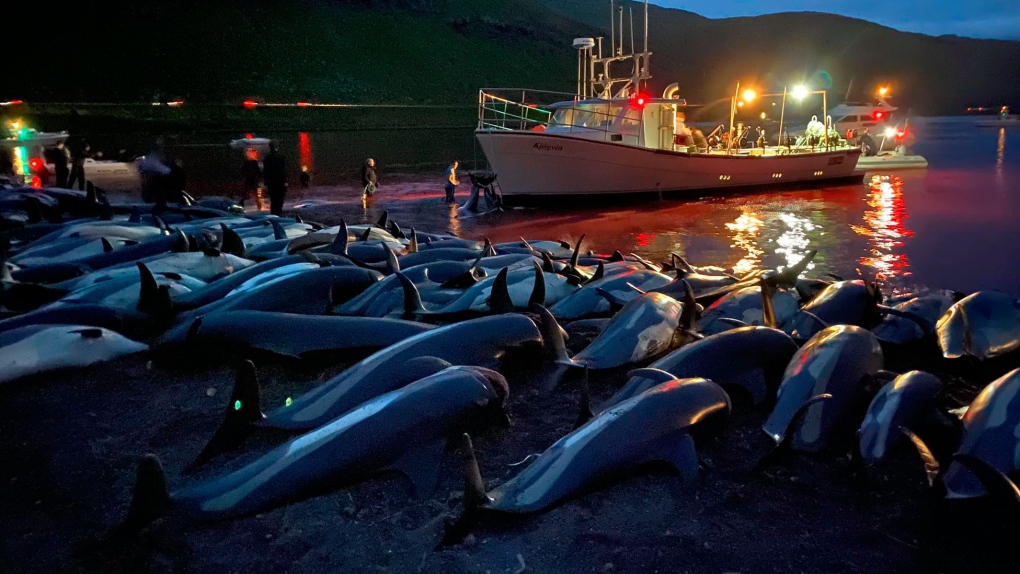 The carcasses of white-sided dolphins lie on a beach after being pulled from the blood-stained water on the island of Eysturoy on Sunday, September 12, 2021. (Sea Shepherd/AP)

More than 1,400 white-sided dolphins were killed Sunday night in the Faroe Islands, in what local authorities said was a traditional whaling hunt.

The killing has been denounced by marine conservation group Sea Shepherd as a "brutal and badly mishandled" massacre, and the largest single hunt in the Danish territory's history.

The organization said a super-pod of 1,428 Atlantic white-sided dolphins was corralled by speed boats and jet skis onto Skálabotnur beach on the island of Eysturoy, where they were then killed.

The Faroe Islands are an autonomous territory of the Kingdom of Denmark, lying about halfway between Scotland and Iceland in the Atlantic Ocean.

The annual whale hunt, or grindadráp in Faroese, has been a part of local culture for centuries -- but it usually involves the hunting of pilot whales. Although it has long been criticized by animal rights groups, locals have defended the practice.

41-year-old Kristian Petersen, who is originally from the Faroese town of Fuglafjørður but now lives in Denmark, said he began participating in whaling at the age of seven -- but in his village, dolphins were never targeted.

"I have experienced that firsthand and also participated a bit," Petersen told CNN. "As long as it has been for food only, I have supported it. But this recent catch that was this weekend, I'm against how it went on.

Petersen is one of several whaling supporters who have condemned Sunday's killing, saying there were "so many errors," including pursuing a large flock and prolonging the dolphins' suffering by not having enough people on the beaches to kill them.

In recent decades, the practice has come under strict regulation from the Faroese government, with guidelines for the authorization of hunts and how they should be conducted.

Many, including Petersen, have questioned the legality of Sunday's killing, with allegations that the local foreman, who is involved in regulating whaling in the area alongside the district administrator, was not informed in line with regulations. Sea Shepherd also claimed that several of those involved did not have the required licenses to participate.

One foreman, Heri Petersen, has been quoted by local media outlet In.fo calling for accountability and confirming there were too few killers involved, meaning the dolphins struggled for breath on the beach until they were killed.

The Faroese Executive Order on Hunting Pilot Whales and Other Small Whales, issued in January 2017, states either the district administrator or foreman must approve any hunts and gives them the responsibility to "ensure that enough people are available on shore to kill the whales."

Bjorg Jacobsen from the Faroe Islands Police told CNN the hunt had been legal, but he declined to comment further.

He said it "was organised and carried out in accordance with Faroese legislation" and "there were no breaches of law and regulations," adding that this had been confirmed by the Faroese Ministry of Fisheries.

Nolsøe added that everyone involved in killing must complete a pilot whaling course, and said hunting white-sided dolphins was a sustainable practice, with a yearly number of around 250, although it "fluctuates greatly" -- making Sunday's catch almost six times as large.

However, Sea Shepherd alleged locals had said there was too much meat from Sunday's hunt and there were fears it would have to be discarded, pointing to interviews published in Danish outlet Ekstra Bladet.

This claim was contradicted by Steintór, a 61-year-old lobster fisherman from the village of Oyri, who did not wish to give his last name for fear of being targeted by anti-whaling activists. He said the meat from the dolphins would equal roughly 200 whales, and so was "not too much."

"I think it's very necessary to kill whales," he said, arguing it was a sustainable practice favorable to the importing of beef. "And we do it in a very humane way, using veterinarian-certified tools ... The problem in the Faroe Islands is that we have a public slaughterhouse. So everyone can see what is going on."

Although he said some locals were frustrated by the "not so well organized" hunt, and he was "surprised by the sheer number of the dolphins," the killing itself was a "normal thing" and did not come as a shock, he said.

Sea Shepherd further alleged that several dolphins had been run over by motor boats and "hacked by propellers," resulting in reports to local police. The Faroe Islands Police did not respond to a CNN request for comment on the allegations.

"Considering the times we are in, with a global pandemic and the world coming to a halt, it's absolutely appalling to see an attack on nature of this scale in the Faroe Islands," Sea Shepherd Global's CEO, Alex Cornelissen, said in a statement.

The Faroe Islands Whales and Whaling body has continued to stand by the practice in recent years, stating on its website, "the average catch of around 800 whales a year is not considered to have a significant impact on the abundance of pilot whales, which are estimated at around 778,000."