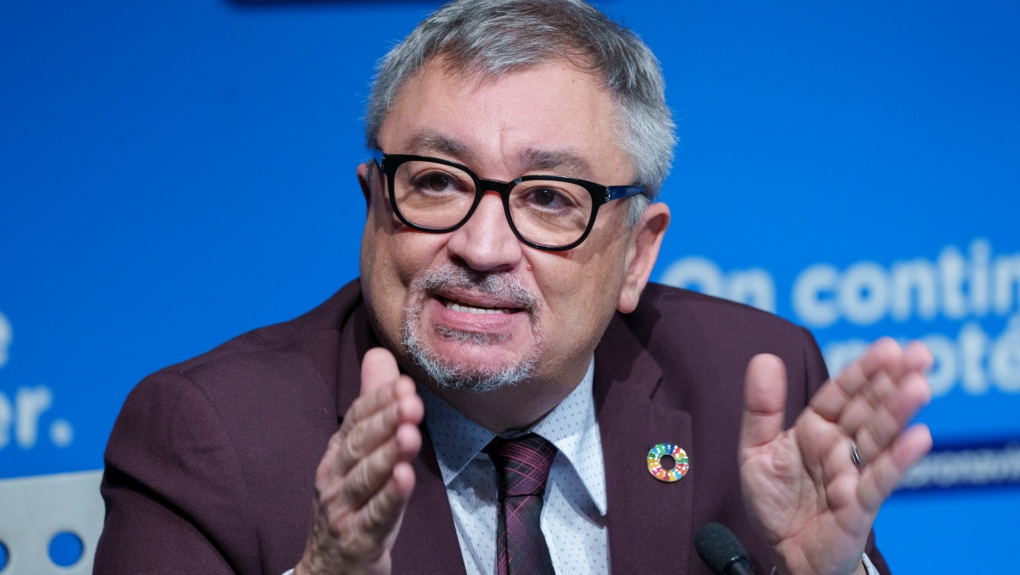 Former Quebec Director of Public Health Horacio Arruda responds to a question during a news conference in Montreal, on Wednesday, January 5, 2022. (THE CANADIAN PRESS/Paul Chiasson)
MONTREAL -

Quebec's director of public health, Dr. Horacio Arruda, tendered his resignation on Monday, citing an erosion in public trust as the province grapples with record hospitalizations during a fifth wave of the COVID-19 pandemic.

Premier Francois Legault accepted the offer, with Arruda's departure confirmed to The Canadian Press by the premier's office.

His resignation comes as the province is in the midst of a surge of COVID-19 cases fueled by the more transmissible Omicron variant of the novel coronavirus.

On Monday, Quebec reported 2,554 hospitalizations due to COVID-19 -- a new pandemic high -- as well as 248 intensive care cases. The province has reported 11,966 deaths since the beginning of the pandemic.

Arruda wrote in a letter dated Monday that his office has offered public health opinions and recommendations amid uncertainty and based on the best available knowledge and various expert opinions.

But he acknowledged there was a "certain erosion" in public support for health measures.

"Recent comments about the credibility of our opinions and our scientific rigor are undoubtedly causing a certain erosion of public support," Arruda wrote. "In such a context, I consider it appropriate to offer you the possibility of replacing me before the end of my term of office."

Arruda's contract was renewed for three years in August 2020.

In recent weeks, the province has brought back several stringent health measures including a curfew for a second year in a row amid rising infections and hospitalizations.

There were also calls to replace Arruda previously over comments that the use of rapid tests or even wearing a mask gives a false sense of security.

Legault will hold a news conference on Tuesday to address the departure.

Legault had given Arruda a vote of confidence on Dec. 30 in announcing several further measures including the curfew, with the premier insisting he was the right person to lead the public health department.

Arruda has been at the forefront of the province's COVID-19 pandemic response since it was declared in March 2020, seen as a reassuring figure as the province was hit hard during the pandemic's first wave.

Arruda had held the post of public health director since the summer of 2012. In his resignation letter, he offered to serve the government in a different post.

"Do not see in this gesture an abandonment on my part, but rather the offer of an opportunity for you to reassess the situation, after several waves (of the pandemic) and a context in constant evolution," Arruda wrote.