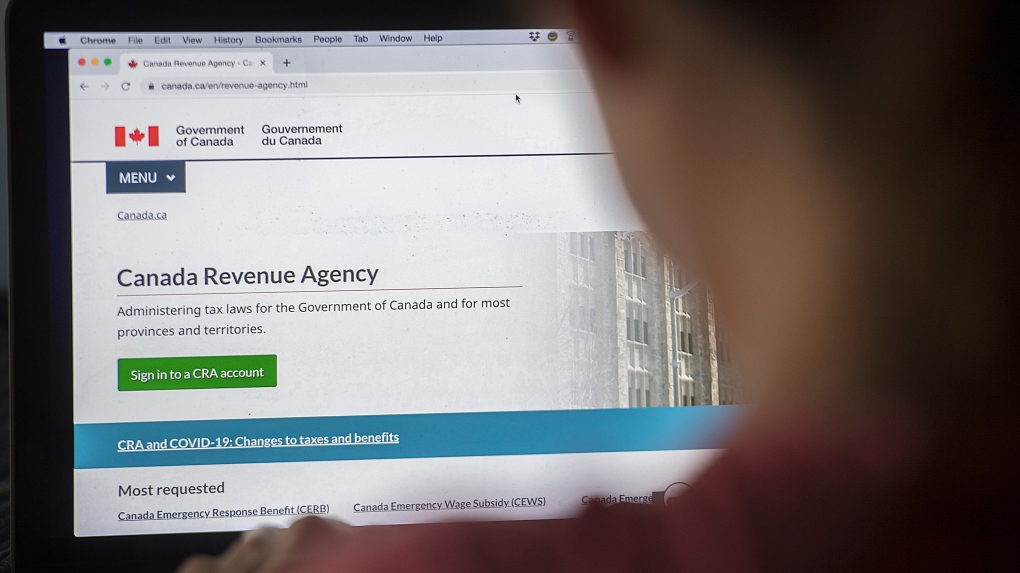 A person looks at a Canada Revenue Agency homepage in Montreal, Sunday, August 16, 2020, as the COVID-19 pandemic continues in Canada and around the world. (THE CANADIAN PRESS/Graham Hughes)

OTTAWA -- It has been 11 months since Christine Ilott lost her job in live theatre when the pandemic forced closures in the entertainment industry.

The Toronto-area woman has unsuccessfully hunted for work since, relying on the Canada Emergency Response Benefit and its successor the Canada Recovery Benefit to pay her bills.

In the summer, with the CERB nearing its end, she worried about losing her benefits. She worries again about losing the CRB, when she will max out the income support next month with no immediate job prospects.

Worried about workers like Illot, labour groups are now asking the federal government to provide her and others with extra weeks of pandemic aid.

"I'm sure that the finance minister would agree that it's best for all of us to be able to plan our budgets," Ilott said Thursday in a virtual press conference. "But CRB ends next month and we haven't heard anything about what's going to happen."

Although the Canada Recovery Benefit is in place until the fall, recipients are eligible for a maximum of 26 weeks of the $500-a-week aid. The worry is that workers who have relied on the federal support since its launch will exhaust their eligibility at the end of March.

Larry Rousseau, executive vice-president at the Canadian Labour Congress, said it's unlikely workers in hard-hit sectors like restaurants and tourism will be back to full-time hours by March, or even the summer.

The CLC and others are asking the Liberals to extend eligibility at least until the end of the year, which is how long they believe it might take before the workers in hardest-hit industries get back on the job.

They're looking for similar changes for those who qualify for employment insurance, as well as a broad review of the program that the Liberals have long promised.

"We need to make sure that everyone -- everyone -- has the ability to pay the rent, put food on the table and pay the bills, and more," Rousseau said.

The latest federal figures show the Canada Recovery Benefit has paid out $9.88 billion in benefits to more than 1.7 million people since it launched at the end of last September -- more than the $9.72 billion estimated cost for the program in November's economic statement.

Updated spending estimates tabled in Parliament this week increase the CRB's estimated cost to $10.1 billion this fiscal year, which closes at the end of March. Employment Minister Carla Qualtrough has previously said the government would consider any changes necessary to the benefits program.

"This continues to be a difficult time for workers in Canada, which is why comprehensive supports like the Canada Recovery Benefits, an enhanced EI program and the Canada Emergency Wage Subsidy remain available," her office said in a statement. "Canadians can be confident that we remain unwavering in our commitment to support workers and businesses through this crisis."

About 40 per cent of workers who lost their jobs or saw incomes crash last April previously made less than the $500 per week provided by the CERB, based on Finance Department calculations.

On average, they determined, the CERB replaced about 80 per cent of income, with the replacement rate rising above 100 per cent for those in highly affected sectors like accommodation, food and retail trade, and dropping to the 55 per cent provided by employment insurance for higher-wage workers in construction or manufacturing.

Despite those relatively high income-replacement rates, officials wrote in the November briefing note to Finance Minister Chrystia Freeland there was "little evidence yet of meaningful work disincentives."

"While disincentives effects appear limited so far, they could become more apparent as the employment recovery slows for the remaining unemployed, who may be more marginally attached to the labour force," reads the note, a copy of which The Canadian Press under the Access to Information Act.

The job market was improving through to November, but then went in reverse in December and January, putting employment rates back where they were in August. The unemployment rate was 9.4 per cent in January, with over 500,000 workers out of a job for at least six months.

"Clearly, we are still very much in the midst of the second wave in this worldwide pandemic and sectors are still completely closed," said Deena Ladd, executive director at the Workers Actions Centre in Toronto, which advocates for low-wage workers and those in precarious employment.

"Workers actually don't even have jobs to go back to."

This report by The Canadian Press was first published Feb. 18, 2021.